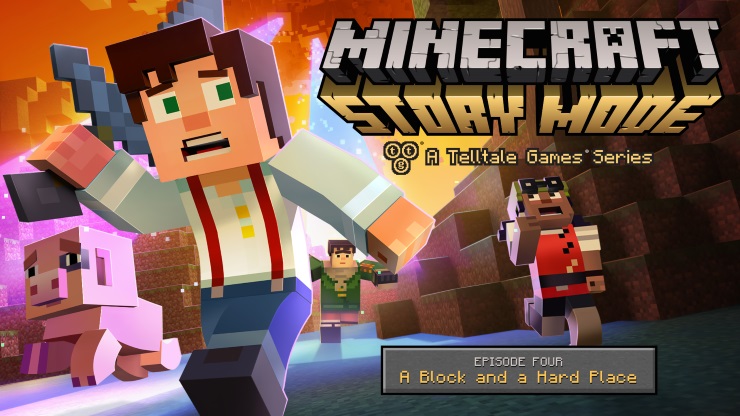 I’ve made no secret from the beginning that, despite being a huge fan of the source material, Minecraft: Story Mode hadn’t quite sunk in for me. Episode three did a lot to turn that apathy around, and thankfully episode four builds on that strong foundation and delivers another good episode.

We begin where we left off, with Jesse’s failed attempt to destroy the Wither Storm at the end of episode three. It’s an action packed start with our band of heroes running for their lives in a QTE-packed sequence. I’ve mentioned previously that there didn’t seem to be a fail state for these sequences, which was perhaps in keeping with the intended young audience, but in this episode that appears to have changed. I found that to be an interesting difference which does seem to coincide with the development of some of the more mature elements of the story that continue to unfold during A Block and a Hard Place. Part of my earlier disinterest was that despite setting up the story to be a classic adventure tale where our intrepid hero goes on a quest of discovery, there has actually been very little sense of actual adventure. Everything seems to have been just around the corner (notwithstanding the use of the Nether rail system for fast world traversal) and within easy reach. A Block and a Hard Place changes this feeling somewhat with a real sense of journey throughout most of the episode. Jesse and his/her team must travel to the Far Lands, which, as any Minecraft aficionado will know, is the outer limits of the “infinite” world where the algorithm that generates the landscape starts to fail. It’s a nice touch, and forms part of the late title sequence we have come to expect from Telltale Games. The fact that the journey took our crew through many of the very recently introduced biomes to the console editions of Minecraft was a particularly cute touch, and after playing the episode I fully expect younger fans to launch straight in to Minecraft to see if they can find the Ice spikes or Mesa biomes in their own worlds.

The Far Lands are the base for much of the episode’s content with some interesting puzzles to solve. These are a nice addition and keep the gameplay engrossing without being too difficult to become a block to progression. They aren’t without some issues though, given the intended audience. There is a maze section which could frustrate younger players as the lighting and camera angle is at times a little obtuse to be able to clearly see the route forward, and the solution to a locked door could be frustrating for younger players if they haven’t paid that much attention to a lot of the dialogue that preceded it. These are minor complaints though, in an otherwise fun episode. Some of the themes that were starting to emerge in episode three are continued in four. The Order of the Stone’s history is finally revealed and suddenly the insufferable nature of some of the members makes sense. The set up for it was signposted a mile off, but I’m sure that younger fans will have mouths agape when the final reveal is made, and I am smiling thinking about it now.

Episode three had some emotional elements that I said that younger players may need to be guided through, and there is a continuation of this in episode four. I was surprised that the story took this specific turn as I believe the events will be felt keenly by younger players, but I think it is indicative of how the story has developed and introduced new ideas as it has gone along. I was surprised to learn that Telltale made it clear that episode four would tie up the story featuring the Wither Storm. It makes for an interesting episode five as I am keen to find out what is next. Will they start on a completely new adventure? Will they take on the mantle of the “new” Order of the Stone? Is this a deliberate step to set up a sequel? There weren’t any hints as to what the last episode will entail in the post credits, so we’ll have to wait and see.

A Block and a Hard Place builds on the shift in pace and tone from episode three and is another strong episode. The conclusion to the Wither Storm storyline is delivered in a refreshing and heartfelt way, and I am looking forward to seeing what Jesse and friends get up to in the conclusion.

Some frustrating camera angles.
Solutions to puzzles may have been missed.
Game engine is a bit sluggish at times.

The conclusion to the Wither Storm storyline is delivered in a refreshing and heartfelt way, and I am looking forward to seeing what Jesse and friends get up to in the conclusion.