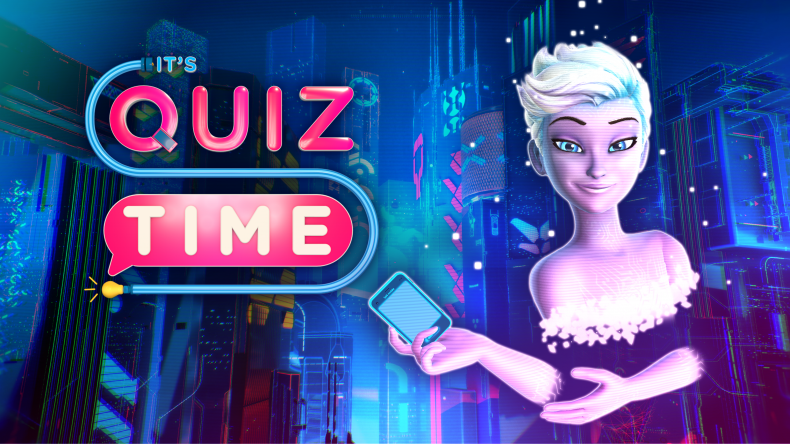 Remember Buzz, back in the day? The PS2 quiz game you had to always untangle the mess of wires that were the buzzers before you could play, that had a cheeky, wise cracking host and tested you on the most hard hitting trivia the mid-noughties had to offer? Of course you do! Well guess what? You can relive those days of family quizzing (without the wires, thankfully) with It’s Quiz Time.

Played through a companion app on your mobile or tablet and with nearly 30,000 questions to answer, It’s Quiz Time is a lot of fun with friends or family. Even if some annoyances can be irksome. The app clocks in at 290.1 MB, which may require for you to make some space on your phone and it doesn’t half rinse your battery, too. A round of It’s Quiz Time also isn’t the fastest in getting started, especially if someone is playing for the first time. When you first join a game room you’ll be asked to fill in some details by the AI host Salli (more on her later). You have to fill in your name, how it’s pronounced, age, add a photograph and, what is a nice touch, preference which pronoun you’d like to be referred as.

While it is nice to have a personalised touch, like questions being tailored to your age, and having the host actually pronounce your name as you play, setting up to play is a bit of a drag and I could see it putting some players off before they even get started.

But if they do stick around they’ll be in for a really fun quiz game. There are plenty of different rounds, meaning any one game could be structured in a slightly different fashion aside from the three rounds which are always present. These being a standard question and answer round, a round when all the other players are up against the leader and the final round which gives and takes away points based on how quick you are to answer. The last round is great because someone can easily go from being bottom to winning the whole thing, so even if a player is dead last they don’t have to mope about it. There’s always a chance. The favourite round of my household by far was the ‘Describe’ round, in which you have to choose a category you think you know best and then say words associated with that thing. Your opponents will have the words on their screens and have to press them when you say it. This obviously leads to fun shenanigans.

I’m always a fan of quiz games that bring the game out of the TV and into the living room, making the players have to compete physically and use their bluffing techniques. As well as the describe round there are others that rely on how well you know the people you’re playing with.

While there are well over 25,000 questions and a massive variation of categories, literally everything from AC Milan to Rhianna, Vikings to Mathematics, a lot of the questions either follow the same format or are basically repeats. For instance, should you pick ‘AC Milan’ most of the questions you’d get would be “Which French Footballer represented Milan between 2007-2011”, pick a music artist and they’ll mostly ask when a certain song was released. It’s great to have such variety of topics, but it does come across as a bit lazy when all the questions sound the same. Also, unless I haven’t had the pleasure of getting it yet, there’s no photo round! Nevertheless, once a game gets in full flow and you understand what you’re doing in each round it’s a blast and really took me back to the glory days of playing Buzz.

One area where they didn’t quite mimic Buzz as well though is with the host, Salli. Her being able to pronounce your name, and you being able to set that pronunciation to whatever you like, does lead to a lot of laughs but apart from that she’s just a bit… weird? Her voice sounds like you’ve told Microsoft Word to speak, she pronounces lots of words in a strange way, she has the deadest jokes and makes some wham facial expressions. However, she isn’t quite annoying enough to derail the show.

There’s lots of extra good stuff in It’s Quiz Time, too. You can create custom games so you can play your favourite rounds, you can play in single player and see how high up the leaderboard you can go and for the inclined, there’s in game functionality to stream your own show and play with people all over the world. With ‘Event’ quizzes coming soon and DLC on horizon there’s lots in It’s Quiz Time to enjoy.

It’s Quiz Time is a welcome return to the quiz games of old, made a lot easier thanks to mobile phones. It’s a fun quizzer to play with either friends or family, even if the host is a bit annoying.

It’s Quiz Time launches on November 28 for PS4, Xbox One, and Steam