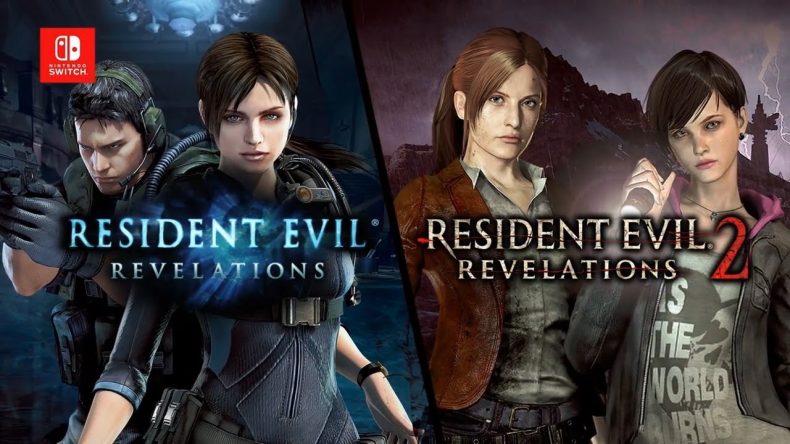 Resident Evil has been a staple of video games for over 20 years, but the core values of the series have shifted over time, and the heart of what made the games so popular in the first place have faded and changed – sometimes for the better, but mainly for the worst. Thankfully, Resident Evil Revelations revisited that core survival experience, bringing with it the horror, the scares, the characters, and the tongue-in-cheek writing that became such a huge part of its success. Now, RE Revelations 1 & 2 have found a new home on the Nintendo Switch, allowing you to play through both tremendous campaigns, and the remarkably fun Raid modes in new ways, whether on the go or in your living room.

Resident Evil Revelations has you dealing with a bioterrorist organisation known as Veltro, who release all manners of hell upon the solar powered city of Terragrigia. It’s set between RE4 and RE5, and has you playing as both Jill Valentine and Chris Redfield. The worst thing for me, is the terrible side characters, specifically Chris’ partner, Jessica Sherawat. She’s too interested in looks and herself to care about the actual threat of bioterror, and any character that says “me and my sweet ass are on the way” before helping her partner in a sticky situation can get to fuck. Resident Evil Revelations 2 features a much better story, and has Barry Burton as a playable character for the first time in the history of Resident Evil, which is only a good thing. In Revelations 2, Claire Redfield and Barry’s daughter, Moira, get kidnapped by masked soldiers and thrown into a filthy dungeon rather reminiscent of something from the Saw movies. What unfolds is Resident Evil down to a T; the feel of it, the inclusion of RE lore, familiar names, and two different endings remind you of the the very reasons you fell in love with the franchise in the first place. The coolest thing about the game, for me, is the ability to control two different characters, and having to play with a different mindset for both. For example, Claire is great with guns, but Moira doesn’t have one, instead using a torch to locate important items. It’s a smart mechanic that means you’re swapping on the fly throughout.

So what’s changed to the controls since its outing on PS4 and Xbox One? If you’re playing the games on your TV, and you have the Joy Cons in your hands, Capcom has tried to add a dynamic way to fire your gun, and give you more control when fighting through the various zombies you’ll encounter. By holding in ZL to aim, you can then move the right Joy Con to aim at your target, clicking the right trigger to fire. The movement is surprisingly fluid, but works so much better if your only trying to dispose of a couple of targets at a time, mainly because action can get frantic and you won’t always get time to be as precise as you’d want.

You can also reload by swiping the right Joy Con down, giving you quick responses between firing, and a left swipe will allow you to use your knife to stab enemies or break into boxes for items. Of course, you can just press a button to use your knife, reload, or fire your gun, but these controls actually feel like a necessity to play, and less arbitrary like other games incorporating motion controls. In Resident Evil Revelations 1, you can also use the Joy Cons to aim your Genesis Scanner, adding yet more ways to facilitate the motion controls. These controls also make it more fun to play in docked, and whilst it may perform better in handheld, the motion controls were my favourite way to play both RE Revelations and RE Revelations 2. There’s all DLC included in the games, with the various Weapon Packs for RE Revelations, and the two Raid costumes of Rachael Ooze and Lady Hunk. The content for RE Revelations 2 is here as well, including the bonus episodes, Albert Wesker and Hunk Raid Mode characters, the Raid Mode map pack, extra costumes, and more. It fleshes out both games and gives you loads more to do, especially in Raid Mode. For those not familiar with the mode, you start off my selecting a character and a weapon loadout. Then, you’re thrown into a location from one of the two games to kill enemies and reach the end, with points awarded for various achievements in that stage. It can be played alone or in co-op, and it adds hours to your enjoyment of the two games. In RE Revelations 2, you can play locally by splitting the Joy Cons between two of you, which is a really cool feature.

These are the perfect RE games to play on the Switch, with fantastic motion controls and a whole host of cracking DLC to boot.

Debatable: How to do Episodic Games