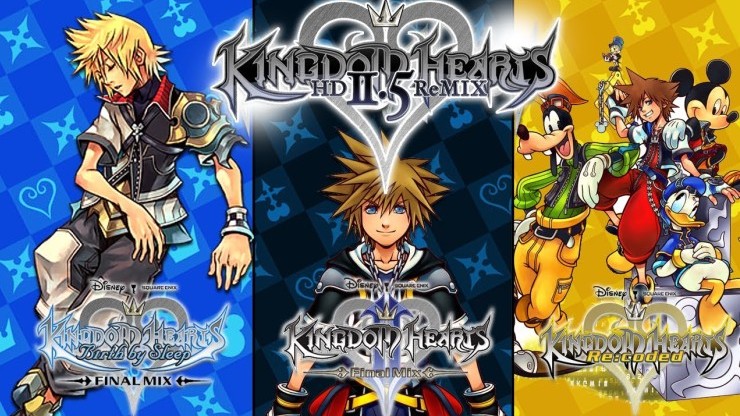 A strange combination of Final Fantasy and Walt Disney, Kingdom Hearts was always bound to stand out from other video games on the market. Although the action-RPG gameplay may not have been anything revolutionary, the two PlayStation 2 releases were big hits and a whole lot of fun to play through. It has been around twelve years since the first Kingdom Hearts was released now though, and despite there being a third game on the horizon (albeit perhaps a far 2017 horizon), there will be a good portion of console gamers who have lost track of the series, or never played any of it at all.

It is safe to say that, even if you thoroughly enjoyed both of the PlayStation 2 titles, you probably didn’t own every platform necessary to have played each and every game in the series. With editions released on PS2, DS, PSP, 3DS and mobile phones, the over-arching story has become difficult for the average gamer to follow – so it is definitely helpful that Kingdom Hearts fans can now experience the entire back catalogue (or nearly anyway) on PlayStation 3 alone. The original Kingdom Hearts received the HD treatment last year – bundled in with re-worked versions of two handheld games – and now it is the turn of its sequel. Kingdom Hearts 2.5 Remix includes the Japanese extended edition of the sequel, Kingdom Hearts 2 Final Mix, as well as the previously PSP-exclusive Kingdom Hearts Birth By Sleep Final Mix (an extended version also never seen outside of Japan) and mobile phone title Kingdom Hearts Re:Coded. The two console games are both graphically remastered, with new content, whereas Re:Coded actually does away with gameplay altogether and is simply a compilation of in-game cutscenes and newly-created cinematics.

For the uninitiated, the series on the whole follows protagonist Sora, who finds himself chosen as a Keyblade master and taken from his home to fight the Darkness of the world. The Darkness takes the form of a mysterious group known as Organisation 13, and monsters known as the Heartless. On his travels he visits different worlds that are based on well-loved Disney films, and meets characters from both the Disney and Final Fantasy universes. The premise allows for some really imaginative cross-over action, and it’s fantastic seeing characters you grew up with come to life.

Sadly, as the series has worn on, the plot has become incredibly convoluted. The events and storylines seem to jump backwards and forwards in terms of chronology, and there are so many characters with similar names and faces that it’s difficult to step back from the series for a short time and then pick up where you left off. The original characters created especially for the series just aren’t as compelling and well-developed as they should be – or perhaps it seems that way because we all know and love the Disney and Final Fantasy ones so well. It must also be said that both playable games in this collection have insufferably long tutorial/introduction sections. Kingdom Hearts 2 more so, where the real action won’t kick off for at least three hours, and instead you have to wade through flashbacks and slow-burning build ups that would have been better cut out almost entirely.

The gameplay in both playable titles takes the real-time fighting from the first Kingdom Hearts and attempts to refine it further with more menu-based abilities and special attacks. Kingdom Hearts 2 introduced new features such as Reaction Commands – quick time events that trigger throughout boss battles or at dramatic moments to allow for more cinematic action set pieces – and the Drive Gauge, a charging meter that lets Sora enter a powered-up state for several moments to inflict greater damage.

These features don’t alter the gameplay greatly, but do allow for a little more variety in battles – which otherwise just degenerate into repetitive button-mashing sessions. This sequel also added a lot of new Disney worlds to explore, such as the Pirates of the Caribbean, Tron and The Lion King (amongst others). These are a joy to explore, and really do feel like you’re entering your favourite childhood films. Additional boss battles, harder difficulty options and a few extra scenes flesh out the experience and give gamers who have already played these titles a reason to come back. Birth By Sleep tries to develop the combat system even further in an attempt to add more strategy to the somewhat shallow action-RPG battles. The Command system sees a series of different special actions that can be equipped, levelled up and fused with other abilities to create even more powerful ones. These take the form of different decks that you can switch between, depending on the situation. Each deck will result in different finishing moves. You can also share the skills of your colleagues through the D-Link even when apart, making use of their attacks until the link meter expires. These additions make the fighting a lot more complex, but perhaps overly so. I found myself far too distracted by setting up decks and switching skills mid-battle.

Nothing can really be said of the gameplay in Re:Coded , as there is none. The title has been pruned back to videos and text alone, forming a three-hour long slog through one of the more confusing entries in Kingdom Hearts lore. At with no gameplay you can concentrate fully on the story and try to work out what’s really happening, but Re:Coded was a spin-off anyway and is largely superfluous. It helps to reveal a little backstory to some events, but is mostly inconsequential when it comes to the development of the overall story arc.

Kingdom Hearts 2 is clearly the centre-piece attraction, and seems to have received the most love in the re-mastering process. The bold, cartoony Disney characters have aged well and all of the character models look very clean. While the high-resolution upgrade has also been applied to the three dimensional environments, there is a certain scarcity of detail on textures and empty environments that show their age a little more, where modern game worlds are simply much more dense and intricate. This can be seen a lot more clearly in Birth By Sleep, which has been up-scaled from a portable console. Facial textures on characters are often a little blurry and many of the game worlds feel like someone has moved house and forgotten to bring their furniture with them. It’s obvious that Birth By Sleep would have benefitted from a re-make rather than just a graphical re-master. But things could be worse – ReCoded has been upscaled from an even less detailed game, and while the experience completely consists of videos, the step-down in terms of fidelity and quality is obvious, with club-like hands and pixelated edges being two of the most stand-out issues.

If you take all the games as simply a fun way to explore different Disney worlds and meet famous cartoon characters, then there is a lot of fun to be had with the simple action-RPG gameplay. Just don’t get bogged down trying to follow every detail of what’s going on – it doesn’t even seem like the writers themselves were completely sure what was happening at some points. It seems sadly apparent from this collection that the series has lost its way. Kingdom Hearts 1 and 2 are the only really great titles in the franchise, and the rest only serve to muddy the water and confound the fans.

This collection shows us the best and worst moments of the series, reminding fans what they both love and hate about Kingdom Hearts

Circuit Superstars review
Back 4 Blood: How to unlock the other characters
Metroid Dread: How to beat the final boss
Metroid Dread: How to defeat the purple EMMI on Ferenia
Far Cry 6 | How to play co-op
How to transfer your Nintendo Switch data to the new OLED model
How to transfer your Death Stranding save file to Director’s Cut
Social Media
SUBSCRIBE
All content copyright GodisaGeek.com
Fonts by Google Fonts. Icons by Fontello. Full Credits here »
Posting....