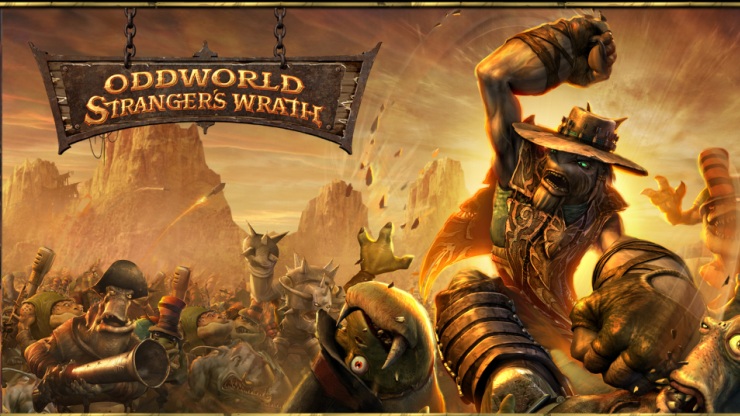 Oddworld Stranger’s Wrath is a bit of a strange game. When it originally launched towards the end of the original Xbox’s life it didn’t exactly set the world alight, but critics seemed to like it. In the subsequent years it has grown into the definition of a cult game, with a relatively small but passionate fan base that regard it as one of the most interesting games ever made. So this iOS release not only has to live up to the expectations of fans, but also has the daunting task of introducing new, mobile players to the Oddworld party.

One of Stranger’s Wrath’s most interesting ideas was how it merged third person action with first person shooting. A simple tap of a button (or not so simple as I’ll mention later) will switch from third to first person, not only changing how you see the world but also how you can interact with it. Third person is preferable for exploring, allowing you to see more of the world around you and making the platforming sections slightly easier, while first person sees you whip out your crossbow to perform ranged attacks.

Your crossbow is really quite interesting in itself. You can fill it with multiple types of ammo, all of which have different functionalities. Some will create a sound to lure enemies to a certain area; others can be fired and left on walls to create a trap for any enemies that walk by. The varied ammo types not only add extra tactical options to the game, but are also great fun to use and experiment with. However, in order to use ammo you must first collect it, as they are all small creatures that you must capture. The crossbow and the basic third person fighting mechanics are your main combat options, which you will need in order to fulfill the many bounties you accept throughout your time as the Stranger. The majority of the experience revolves around hunting these bounties across the beautiful world in order to raise some cash. The formula does slightly change after the game’s big twist, but I wont spoil that here! Despite the slightly repetitive missions they never really becomes boring or tedious.

What does become tedious and incredibly frustrating are the touch controls. Because of the complex mechanics and view switching the right side of the screen is filled with virtual buttons, all of which have different jobs. A tutorial does a good job of guiding you through them, but because there is no standard virtual button layout I often forgot which button I had to press. The buttons are also quite small, even on my massive iPhone 6 Plus screen, and thus became quite difficult to press with my rather large fingers.

Dragging across the left of the screen moves Stranger while dragging across the right moves the camera, (proving you don’t tap a button as you press to move initially). It’s a system that has been seen on mobile time and time again, and it is still yet to be perfected by anyone. I imagine after a while you could get used to the touch controls, but they certainly take away from the overall experience and made it very unenjoyable for me. It only took me about 20 minutes of frustrating touch controls to decide that the only way of reliably and enjoyably playing Strangers Wrath on iOS is with a controller, such as the Steel Series Stratus. (http://www.godisageek.com/2014/11/steelseries-stratus-wireless-ios-gaming-controller-review/ ) With a controller everything becomes much less irritating, thanks to having reliable buttons that are always recognized when pressed. It also helps that the mapping of the buttons to the controller feels natural, like any other shooter/third person game you may have experienced.

There was also a curious experience when I changed all the settings to max. With a brand new iPhone 6 Plus I thought it would handle it with no problem, but the frame rate plunged near-unplayable levels, input became laggy and it really did feel like trying to run Crysis on a budget HP laptop. After being disappointed that my new hardware couldn’t run the game at max settings I realized that it was great that I could change the settings at all in order to make the game run optimally on my hardware, a feature that is sadly missing from many iOS titles.

Oddworld: Stranger’s Wrath on iOS is technically the same game it has always been: you run round trying to take down bounties and messing around with the awesome ammo types while switching between third and first person. However, this mobile port is severally let down by the bad touch controls that will inevitably turn many people away. If you are one of the few who have an iOS controller then by all means pick it up as you wont be disappointed, but everyone else should probably give this a miss, no matter how much you loved the original.

Stranger's Wrath remains a good game, but the awful touch controls mean you're better off skipping this mobile port.