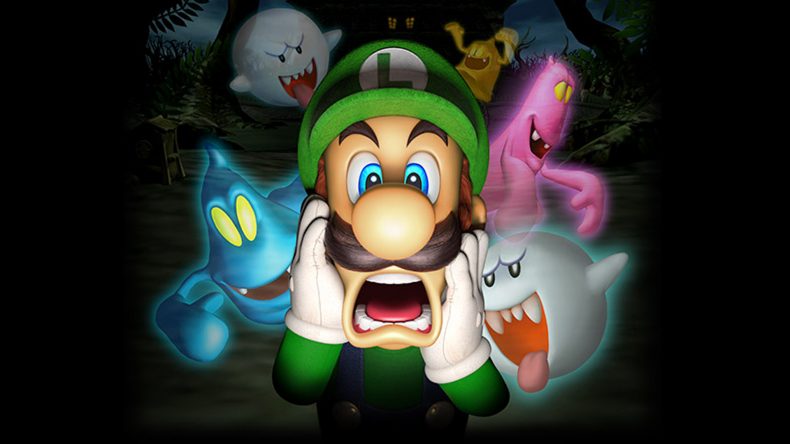 The GameCube years were an odd time for Nintendo’s famous plumber duo. On the one hand Mario was given a back mounted water cannon and charged with clean up duty in the public interest, all while being on holiday no less. But before this, Luigi found himself on clean up duty in a large mansion with a vacuum cleaner for company. Looking back, I’m not entirely sure if I’ve ever seen the Mario Bros. do any actual plumbing.

Mario’s F.L.U.D.D. and Luigi’s Poltergust 3,000 were both the work of Professor E.Gadd, a character introduced to Nintendo’s burgeoning roster through their little purple gaming box and yet he’s never been requested as a Smash Bros. character. Anyway, Luigi’s Mansion was Gadd’s first appearance, and now his origin story is back for a new generation with a 3DS remake of Luigi’s first foray into house cleaning. If you’ve not played the original or the 2013 3DS sequel, here’s the gist: Luigi has won a mysterious mansion in a contest he never entered, upon learning this Mario went to investigate and never returned. So now it’s the green pigmented plumber who now gingerly finds his way into a place that no-one who has ever seen a horror movie would dare enter. It’s in this place that Luigi meets the aforementioned Professor Gadd who drafts the hapless coward into doing his ghost busting duties for him, so now Luigi finds himself armed with a torch and the power of suction looking to eliminate the ghostly nuisance from his new digs and save his brother.

So, this game was originally released back in 2001, a full seventeen years ago and all things considered it looks great on 3DS despite the downgrade in graphical fidelity. There are concessions made to resolution, model complexity, aliasing and texture work, but the game is otherwise exactly the same from core gameplay to boss fights albeit with a new co-op mode for those with a busting buddy. The game is download play enabled, but you won’t be able to play the story mode together unless both players own the game. One thing that has unfortunately made the transition intact is the god awful camera, something that’s incredibly unwelcome. Now, the camera angle actually worked in Luigi’s Mansion 2, the fact it was more zoomed out and there wasn’t as much need to line yourself up to fire projectiles at enemies meant that it wasn’t as much of a frustration, here though there are many occasions where you need to suck something up and then let go to fire it at some-one or some-thing and you’ll find that more often than not your shot will whiz right past your target. This also causes frustrations when you’re trying to dodge enemy attacks because the location on the 3D plain isn’t 100% reliable and as a result you’ll find yourself losing health to an attack you thought you weren’t even in the way of.

A lot of the time you’ll need to ensure you’re pointing at something correctly to do what you need to do. Ghost have to be stunned and you do this by charging up Luigi’s torch and then letting go to fire off a blinding light in the direction you’re facing, do it at a ghost and you’ll be able to follow this up with holding the R button to activate the Hoover. Do this and they’ll have a number appear over them, that number will start reducing, to speed it up you’ll need to pull away from the ghost as it tries to escape, bring the counter to zero and Luigi will claim his prize. Ghosts have differing health quantities for you to consider when trying to suck them up, with Boos especially varying from as low as 50 to as high as 300, but it’s the painting ghosts that require a bit of thought into their capture.

E. Gadd has a gallery you see and all the pictures were actually ghosts that have now escaped and also reside in the house, come across one of these and you’ll need to use the ‘Search’ function of Luigi’s new ‘Game Boy Horror’ to focus on their heart to find their weakness. A pair of twins for instance ask you to play Hide and Seek while a little girl worries about wetting the bed, once you’ve exploited their weakness you’ll attempt to suck them up just like all the others. There’s an odd horror to the fate of these ghosts that you claim on behalf of E.Gadd, their struggles as you attempt to capture them are frenzied and desperate because they of course long to be free and aren’t really doing anything wrong. It gets even more horrific when returned Gadd’s lab where a machine presses the ghosts down and turns them into paintings, frozen in time for eternity on a wall in Gadd’s gallery. It’s not really a fate that’s fair to bestow upon people just minding their own business in a place that you realistically had no right to be in.

But put them away you must, for that is the ultimate goal of Luigi’s Mansion, and what a mansion it is, there’s an obscene amount of rooms in this place, you’ve got a clockwork room, several balconies, two gardens (one with a well), an antechamber, several bedrooms, a ballroom and more. As you venture around you’ll find that there are some questionable design decisions from a traversal point of view, there are hallways that are separate from other hallways and it makes no sense for there to be no doorway between them other than to make the player take the long way around to get there, it’s obviously a way to make the player re-enter old rooms regularly to capture Boos (certain quantities are required to pass particular doors) but unfortunately there’s only one method of fast travel, mirrors, and they only go in one direction, back to the main hall.

People who play Metroidvanias will be no stranger to the idea of trekking through areas they’ve been through before but normally there are new toys to play with, here, aside from the occasional use of fire, water and ice elements – after acquiring the required spirit and expelled with a press of the L button – there’s nothing really that livens up the retreading of old ground. If anything the element issue exacerbates the to-ing and fro-ing more because if you happen to go in somewhere without the element you need to succeed you’ll have to go back and get it before making the return trip again.

The lack of a second stick also hampers things slightly too because motion controls aren’t great with this kind of game. Luigi points forward and as you tilt the console backwards and forwards Luigi pivots his aim up and down, if for any reason you stop sucking while tilted Luigi will remain fixed in that position until you press B to reset him. The thing is, I often found Luigi’s aim would reset while I’m trying to aim upwards, an annoyance when trying to capture Boos who adjust the height they float at regularly. You can use the dpad to move your aim up and down but then you cannot move around, so the first solution is inelegant, the second is unusable. I don’t want to be too down about this remake, at the end of the day the 3DS version of Luigi’s Mansion is incredibly faithful to the original which was a very charming game. Traveling around Luigi’s abode with his face stuck in that incredibly forced grimace is still fun and the frustrations while prevalent in single player can be mitigated by playing in local co-op. While fondly remembered Luigi’s Mansion was never one of the GameCube’s best received games, and it’s not going to be one of the 3DS’ either. The game clocks in at around six hours for the main campaign which kind of makes the full asking price a bit eye opening.

If you’ve not played a Luigi’s Mansion game before you’re better off going after the cheaper and superior sequel. If you’ve played that but not the original you’ll find more of what you know here, but don’t expect anything better than what you’ve played before. This truly is as close to original version as it could possibly be, gameplay foibles and all.

Faithful to the original

Luigi’s Mansion is a great place to visit, but while its presence is welcome in 2018 it really could have done with some modernisation.