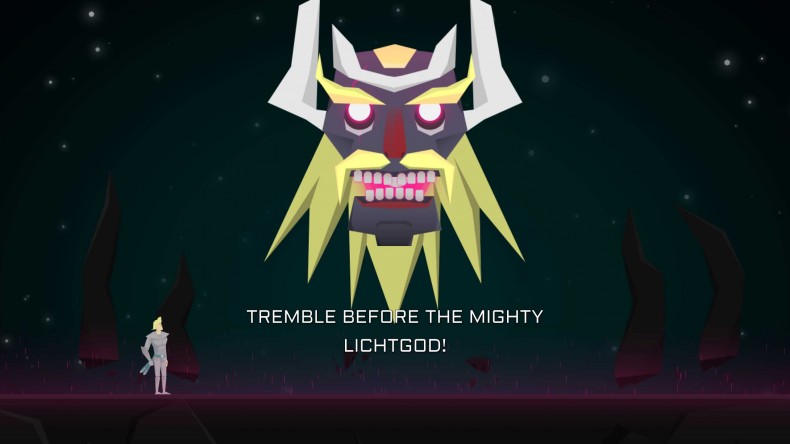 Everybody loves a good high-score game, that “just one more go” feeling as you try to best your score for that level. But that is not the feeling I got from Lichtspeer, the new game from indie studio Lichthund. Lichtspeer is a spear-throwing game, in which you kill hordes of incoming enemies in order to reach the end of the level with the highest score possible.

It starts off well, with some nice offbeat humour, and Guacamelee-inspired visuals complementing the interesting gameplay mechanics. There’s no movement; instead you simply move the left analogue stick to tilt the character’s aim up and down, then hold X to power up your spear throw. Holding X slowly brings up a projected throwing arc, helping you aim a little easier, and letting go will launch the titular Lichtspeer at whichever creature is in your sights.

It’s a simple premise and it works quite well for the first couple of levels, but it soon comes apart once things get hectic. Levels are broken down into a handful of screens, meaning that death will reset the current screen – and death will find you an awful lot during your time with Lichtspeer. The problem here is that it’s the poor aiming mechanics that result in your death, and the frankly unfair pace at which the enemies come rushing in – it very rarely has anything to do with player error. This isn’t helped by the complete lack of a learning curve for the game. Hell, even the first level offers very little room for mistakes, as enemies come charging in from all angles. These issues wouldn’t be so bad if the levels were short and punchy, but they drag on and on, screen after screen, increasing in difficulty. It does create an element of panic and intensity, but that soon gives way to frustration and rage-quitting as you die again and again, just when you’re thinking that the level should have ended two screens earlier. The actual variety of enemies is great, with flying reindeer, viking penguins that row towards you during water sections, zombies in tuxedos, giants in sunglasses, and much more, but the sheer number of them requires pinpoint accuracy every time due to the speed at which they approach. This would be fine in level 8, but when they’re overwhelming you in level 2 or 3, something is wrong.

You’re also punished for missing three times in a row, leaving you unable to move for a moment – which would be fine if you had time to recover, or if the misses were your own fault, but you don’t have time to recover because of the approaching hordes, and the misses are often down to the awkward aiming controls. Sometimes the character defaults to aiming at the floor and you’re forced to tilt up quickly and shoot an enemy that’s now just a few feet away. The analogue aiming feels imprecise and clumsy, and having to hold X and wait for the arc to power up just makes it impossible to throw quickly and accurately.

Fortunately the presentation is nice, with some very colourful and varied designs on offer. Each enemy type has its own distinct style and animation, and it’s simple enough that you can actually appreciate their design as they attempt to murder you at a sprint, and they’re all different enough that you can instantly tell which tactic is needed to take them down. The humour is tiresome though, reminding me of that episode of Spaced that pokes fun at “alternative” artistic expression, as the humour feels silly for the sake of it and, as a result, feels forced. But the Germanic presentation does work for the 80s techno vibe, and gives the game an excuse to pump some questionable (yet catchy) techno music into your earholes for the duration of your time with Lichtspeer. It’s a shame then, that the gameplay cannot match up to the presentation. It could be really fun with shorter levels and a difficulty curve that actually respects the player, and the aiming can be fixed with a patch to make it more accurate instead of awkward and cumbersome. But it has to be said that after a single level, you will have seen everything that Lichtspeer has to offer in terms of gameplay. It never changes, it simply overwhelms you with more enemies and a greater chance of death. Death is of the instant, one-hit-kill variety, but life can be prolonged with some careful use of extra powers such as a temporary shield bubble that repels attacks and kills anything that touches it, or a triple spear attack activated by pressing Square as the spear is in mid-flight, splitting it into three to inflict extra damage to bigger foes or kill multiple enemies with one throw. These do help, but cooldown times between uses are that little bit too long, so they need to be used sparingly once unlocked. You can unlock more powerful versions in the shop, but this counts on you getting higher scores in each level. But will you want to spend more time in those levels?

The simple answer is “no,” of course. Only the most masochistic players will want to spend time in Lichtspeer’s world, learning the specific order in which the enemies appear on-screen to decide where and when to throw, and which enemies to prioritise to avoid unnecessary deaths. That’s assuming you can hit them, thanks to some erratic movement combining with the already clumsy aiming mechanic. Frankly, the ridiculously punishing gameplay and the sheer repetitive nature of the game just make Lichtspeer all the more difficult to recommend.

Despite some great presentation, Lichtspeer is simply an unfair experience that never feels rewarding or fun.