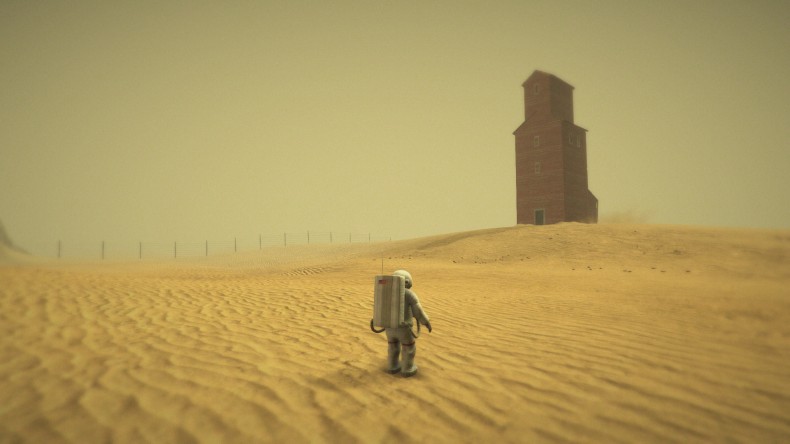 Lifeless Planet began life as a concept created by developer, David Board. The concept went down well with those David shared it with on Kickstarter, so he went on to create a full game, which he released to the masses on PC in 2014. A year on, and with a little help, Lifeless Planet has landed on Xbox One in the form of the Premier Edition. But all is not well, as ambition has ever so slightly ruined things.

The story is about one astronaut’s trip to a distant world. Our protagonist, a scientist, went into this mission believing the 15-year journey to the planet would be well worth the trip. Observations of the planet from Earth indicated a planet brimming with life-forms and greenery. Who wouldn’t want to be the first man to explore that, eh? The landing doesn’t go exactly to plan, and upon awakening, our suited hero finds himself in the middle of a baron wasteland. Not a life form in sight. Not even a weed. But there is a line in the sand that is suspicious enough to warrant following it as the only lead. Clues as to what on earth (or not earth, in this case) is going on are highlighted by flashing white beacons, and approaching these beacons brings up a chunk of text and a short narration to take in. So I kept following the line in the sand until I came across something most peculiar: an abandoned Russian village stranded in the desert sands. Wooden houses, a church, some telegraph poles with wires and everything – the full monty. How did this get here, I ask myself, I thought I was the first dude to arrive on this hunk of rock? And so the true story of Lifeless Planet begins to unfold, as I continue to explore this desolate world I unravel its secrets.

It’s pitched as an exploration-puzzle game, with platform elements thrown in for good measure. What I needed to keep telling myself when playing Lifeless Planet was that this game was largely made by one person, so I’ll excuse that little glitch, or that little bug, that little game breaking sequence of events, that thing that made me reset to my last save, that area of the level I got stuck in, and so on. It’s not that concept for Lifeless Planet is bad, it’s just that it’s wildly over-ambitious an undertaking from such a small team. What is here is commendable, yes, but the controls feel wooden, the variety and scope of things to do are worn down in just two hours, and the whole things feels thoroughly old way before the credits have rolled. So you can walk, jump, double jump (or quadruple jump, thanks to a collectible), pick things up and push things around, read notes and listen to audio recordings. Oh and you have a flashlight for dark areas – it’s all fairly standard. But there are things to like about it. What kept me plugging away was the story, which is told in chunks small enough to keep you just about interested and curious enough to keep marching through the wasteland. There are a smattering of nice visual and audio touches, and the voice acting is decent enough, but on the whole this isn’t a massively pretty thing to look at.

Ultimately, regardless of dev-team size, if a game wants to stand alongside the likes of Ori and the Blind Forest, Kalimba or any one of the excellent downloadable titles available to an Xbox One owner, it has to stand up to the same criticism. Over ambition has killed what is a great premise for a story driven third person game, regardless of its humble beginnings.

Over ambition has killed what is a great premise for a story driven 3rd person game, regardless of it’s humble beginnings.