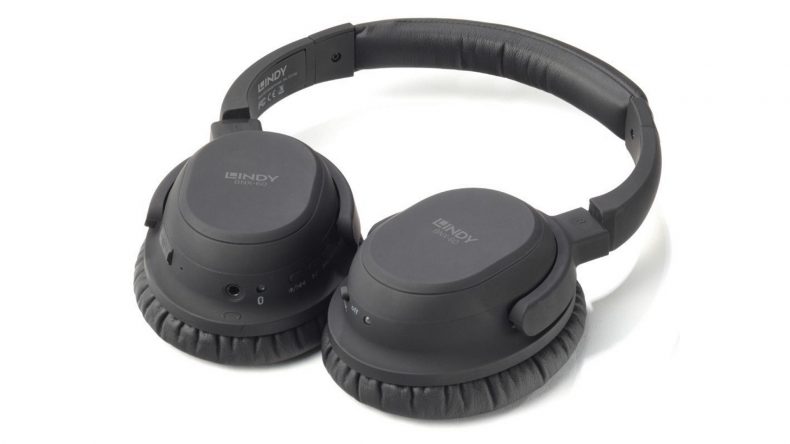 When the Lindy BNX-60s arrived, I arrogantly thought I’d seen it all. But I’ve become stuck in my ways, happy with my Apple AirPods discreetly playing podcasts and music, and I’d been somehow deaf to the noise these tech developers are making in the background. While the Lindys may be an unassuming pair of wireless black headphones, they hide some tech that is very exciting, even if it may not be popular in a busy household.

But first, they look fine. Nothing special, but certainly not ugly, either. There are the usual hidden sliders that make them fit even my big head, volume controls and, handily, controls which let you answer calls, skip tracks and the like, allowing you to utilise the out of view microphone which rather makes them the all encompassing use-case device you mightn’t have realised they were. There’s also a small port for the 3.5mm cable that lets you connect the headphones via a wire, which is useful for the likes of the Nintendo Switch or a PS4 controller, too.

They’re comfortable, but not quite up there with the likes of the Turtle Beach Elite Pro (nor would you expect them to be, given the difference in price (the Lindy retails for £79.99, the Elite Pro for £169.99), but they just about fit over my ears, which is good enough for the price, especially when hiding a secret weapon. It’s a nice touch that there’s an included carry case, too, which has cables and even adapters to help make it work with the more awkward devices out there.

The only other thing I’ve not mentioned, is a switch labelled “ANC” which has an on and off option. Initially, without reading the instructions (pro tip, kids: always read the manual) I assumed this was the power switch. It isn’t, that is simply a case of holding the “play” button to turn them off, etc. No, this is the noise cancelling tech that blew the minds of everyone who has used them so far. Discovering this feature was one hell of a ride. I passed the headphones to my eldest son, asking what he thought of them within an hour of them arriving. I put on an alternative version of “Feels like falling in love” by The XCERTS (check them out, the latest album is outstanding) and he nodded along. I called his name. Then I called it again. Worried now he was listening at a level that must be damaging his young ears, I bellowed so loud the people at the top of the road must have heard. He looked at me in horror, thinking he was guilt of a murder or something, and it caused an argument. What the hell is going on with these headphones?

One apology later (from me), and we were understanding he had the noise cancelling on. So I tried them. This same, laid back, piano led, gentle version of a rock tune played. I could hear him talking to me, just about, over the vocals. I flicked the switch on, and his voice was gone. Completely, utterly silent. His lips were moving but I couldn’t hear a word. This wasn’t even at top volume, this was about half way. My wife then tried this experiment, and was equally amazed. This feature is superb.

Now, while you might not want it on all the time (my example proves why you shouldn’t wear them if you might be called upon), I can imagine this kind of feature is incredible on public transport, or a plane. Even good headphones struggle to cancel the noise of a jet engine, but these? Well, I think they’d have a chance.

To that end, the audio is high enough quality overall that this feature makes them well worth looking into. Bass is clear, as is treble, and they are great all-rounders, actually. They can’t compete with the very top end, but for the price they’re a great pair of headphones, with terrific battery life (up to 30 hours per charge). You can’t really ask for much more for the price, can you?

Could be more comfortable

Bass is clear, as is treble, and they are great all-rounders, actually. They can’t compete with the very top end, but for the price they’re a great pair of headphones, with terrific battery life (up to 30 hours per charge). You can’t really ask for much more for the price, can you?