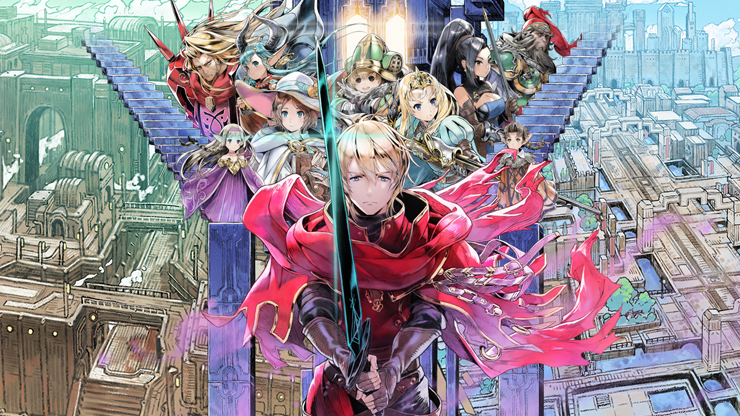 When I got my 3DS a few years ago, one of the big draws was the Nintendo DS catalogue of RPGs that would all be playable without any real issues as opposed to how poorly PSP games on Vita are handled when it comes to the catalogue available. After slowly getting into Atlus games, Radiant Historia was a name that always popped up in recommendations so I eventually bought a copy of the DS version. I didn’t play much initially because I’m great at starting multiple games at once and only finishing a few of them while the others go into the backlog.

Even with my few hours of play time, I knew this would be something special. It reminded me a bit of the golden era Square games and just the PS1 era in general. I had always planned on revisiting it but never ended up doing so. When Atlus announced the 3DS remake Radiant Historia: Perfect Chronology, I was initially glad I waited. Strange Journey and Radiant Historia were the only non Etrian Atlus games left on the DS that hadn’t seen ports to 3DS and they actually ended up doing remakes of both. In fact I even imported the Japanese collector’s edition of both these games just because they put out such fantastic packages. After playing through a few hours of the 3DS remake in Japanese (and not understanding much story), I went back to the DS game and played a whole lot more. Now having played through the fully localized English version of Perfect Chronology, it has a lot working in its favour, but also a few questionable things. The biggest positive of this release is that it is releasing in Europe just a few days after North America. The DS original never saw a release outside North America in English. If you’ve never heard of this game, a lot of people regard it as one of the last few well made classic style JRPGs the same way Bravely Default is spoken about. You play as Stocke who is an agent in a time of war. Vainqueur has a threat of sand plague and Alistel and Granorg are about to go all out to try and capture what’s left to survive. Stocke is tasked with a mission from his Chief Heiss that leads to him not just witnessing his newly found companions die in front of his own eyes but also him being taken to a land where time stands still and where decisions can be remade and alternate paths followed to change history. This land is reminiscent of an MC Esher painting and a book in the form of the White Chronicle given to Stocke by his chief as a lucky charm ends up being so much more. While this seems like a pedestrian time travel tale waiting to happen, it is a lot more. There are limits to the power of the White Chronicle whereby Stocke’s own health and well being cannot be changed by altering the course of history. While many of the RPGs that cross 50 hours end up having filler in some form, the core Radiant Historia experience is amazing and if you enjoy turn based games, this is definitely one of the best ones out there.

This remake has new content and improvements in three different areas. Visually there is a lot to like right from the get go. A-1 pictures has done a fantastic opening movie. Most of the gameplay on the 3DS is also on the top screen thankfully unlike the Nintendo DS version that had information on the top screen and the actual gameplay on the bottom screen. The user interface has been improved considerably although there are some menus that lost some of the charm from the original. This carries over to many of the new character portraits. While everything is higher resolution here, the original portraits are timeless (no pun intended) and some of the new ones don’t fit well with the forced anime look when the original went for something different. To actually use the original artwork for portraits, you need to buy a DLC pack which just rubs me the wrong way but I’ll get to the DLC in a bit. Almost every Atlus port to a new system includes more difficulty options and more story content usually in the form of a new girl and her side of the story. This was the case in Persona 4 Golden, Devil Survivor 2: Record Breaker, and is happening in Radiant Historia: Perfect Chronology, Strange Journey Redux, and even Catherine: Full Body from what’s been shown so far. While I loved what happened in Record Breaker, Marie was the low point of Persona 4 Golden and the new content here comes from a third timeline to some extent. The Possible History timeline involves Nemesia and you can either tackle her story while playing the original or at the end. I like how they give you an option depending on whether you want to experience this as it was on the DS or in the new 3DS format. Perfect Mode is as the name suggests, how Atlus implemented this new content within the original story. Append Mode has the new content available after finishing the main story. Without spoiling anything, I was pretty disappointed with the new story content and I’m even happier that there’s a way to experience the original story with the enhanced visuals. There is a new Friendly difficulty option that is basically story mode and gives you a lot of advantages and a new Hard mode that will kick your ass. I can’t even imagine how the free DLC that adds a harder difficulty will be.

Combat is turn based but it takes place with enemies on a 3×3 grid. Depending on their positions, you can use skills to move them around the grid, chain combos, and get more damage and rewards out of the battle. A lot of times, exploration and combat here feels like what I’d want from a modern take on the 16-bit or PS1 era JRPG combat. It is a blast to play and I will never tire of listening to the battle theme. This remake also features a new kind of skill that is a passive support skill that is very handy in battles and a new combat arena like location that expands depending on progress in the main game. This has its own in game currency that has special items and equipment you can only earn here.

On the audio front besides some new music from Yoko Shimomura, there is near full voice acting for the main story for the main characters. The voice acting is brilliant and when in most cases the voices fit perfectly to what I had imagined while playing the DS game. This maybe one of Atlus USA’s best releases when it comes to voice acting. While many people consider the Kingdom Hearts franchise as Yoko Shimomura’s best work, I am yet to find a track from her catalogue that approaches the Radiant Historia soundtrack. It is magnificent and even if you decide to never play this game or hate JRPGs, you need to listen to the soundtrack. The lack of 3D is a big downer for me. I love the art direction here and not being able to see the opening scene with the rain in the forest area is super disappointing. The art here would’ve really popped and environments would be amazing with 3D. While I appreciate the option to play Append Mode where you can experience the story how it was on the DS, locking the original portraits behind paid DLC is not cool. Cheat DLC for experience and money is expected but when you have a remake, people should have the option to play with the original art for free and it should be included from the get go. For fans who played and finished the original already, I don’t think the new story content is worth another purchase. The other improvements to gameplay and the new difficulty options on the other hand are worth it if you want to replay this. There’s no reason to buy the DS game when the 3DS release exists for sure.

Radiant Historia was one of the best RPGs on the DS and it has come to my favourite RPG platform natively. It has some quirks, but the core game is excellent and every fan of RPGs needs to pick this up on the 3DS. I’m glad more people get to experience it and that it is releasing worldwide as opposed to a single region. This game is special and will stay with you for a long time.