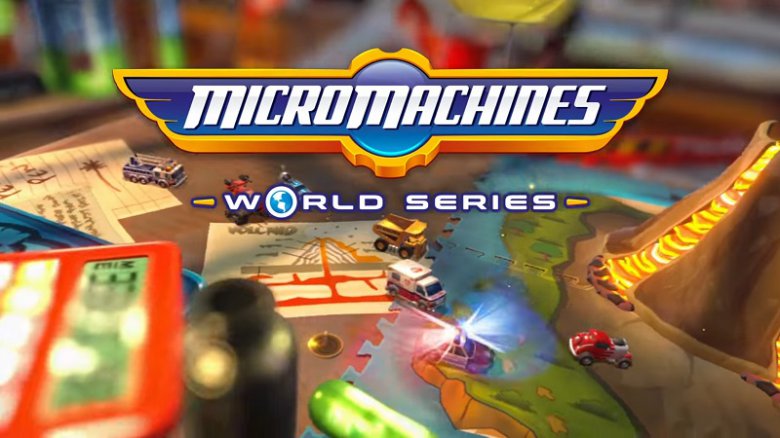 I don’t know what kind of deal with the devil Codemasters had to strike with Hasbro to acquire the Micro Machines license, but it looks to have been pricey, and one that compromised a lot of what made the original Micro Machines games so much fun. Tapping into the heavy nostalgia around the original games, Codemasters has unfortunately created a game that feels a little soulless and empty with some really odd design choices and a liberal amount of Nerf brand positioning.

There is no single player championship, which is a disappointing omission, instead Micro Machines: World Series is focused on multiplayer events. There are straightforward races, elimination modes and a new Battle mode which has a mixture of game types like King of the Hill and Capture the Flag. You can enter into these in a party of friends or on your own. Bots will back fill if there aren’t enough real players online which ensures that matchmaking is a fairly speedy process. The cars available to you are limited; whereas Codemaster’s other top down racer, Toybox Turbos (Micro Machines in all but name) gave you a huge suite of thirty-five vehicles, here you are restricted to only twelve, and the small roster feels sparse. There are customisable cosmetic items available to you via a loot box system (because of course there is), but there is very little sense of progression or an overarching driver to push you to play more, as there is nothing additional to unlock.

There are ten tracks in total with additional, specially created maps for the Brawl mode which are often more complicated, featuring portals and wild jumps. Each map is wonderfully created with familiar household scenes: a kitchen table laid out for breakfast, a pool table, a garden complete with insta-death traps in the form of a lawn mower rotary blade and a pond. There is even a Hungry Hippos board game which is a great deal of fun, especially when you push an opponent into the gaping maw of a Hippo. As you would expect, each map has its fair share of tight turns and drops that will punish you if you take a corner too fast. In the bottom right there is a mini-map that provides some orientation as to where you are on the map, but it more often than not confuses rather than helps, particularly on the Battle maps that have differing levels connected by portals and ramps.

There is some variety in the vehicles with each one having unique attack powers: a straightforward assault, a more defensive mode that causes debuffs with an area of effect and an ultimate ability that takes time to charge. In the Battle mode when players are pushing a particular objective the chaos of combat can get very frantic and you’ll find yourself waiting to respawn more often than not, particularly if you are playing against the AI. Battle mode does offer some fun though, particularly when players are using their vehicles to good effect. The ambulance, for example can provide healing to team mates. Once you reach level ten, Ranked becomes available and there is also an offline local multiplayer mode which is where much of the fun lies. The offline mode offers the same broad game types as the online mode so you aren’t missing out by sticking to that.

Vehicle handling is a strange mixture of sluggish and floaty mechanics. It feels sluggish to get your vehicle moving, but once in motion your car can easily be oversteered and more often than not new players can be seen careening off the map, or in my case driving into a carton of cereal repeatedly. It’s frustrating initially, and the learning curve feels very steep.

Micro Machines: World Series isn’t a full price title, but even with its budget price tag it’s a difficult game to recommend. There just isn’t enough to keep you playing for a long time, the lack of any form of single player Championship mode is a big omission, and there is very little sense of progression. Furthermore, there is something a little grotesque in the blatant Nerf brand placement that makes you feel like you are playing a commercial rather than a video game.

It’s a shame, because the Micro Machines brand deserves more. There is a shred of promise in the game, but it feels like a party game, one that you get out every now and again to play with your mates when they come over.

This isn't a bad game, but there are some omissions that have been with the series forever which are strangely missing.