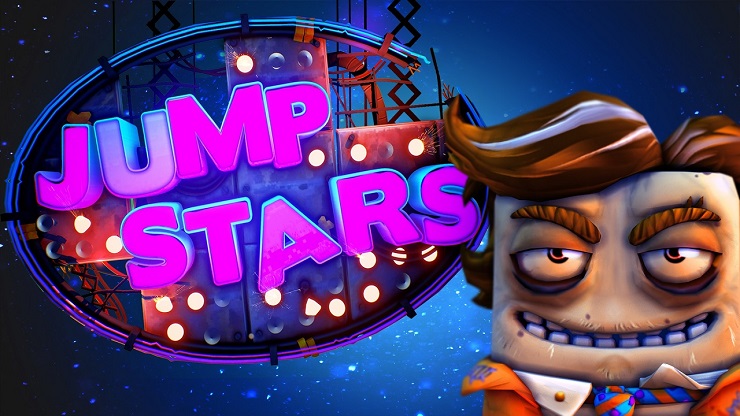 Jump Stars is a co-op/competitive game that’s presented in a TV show like format. Presented by a wise cracking fella who is clearly trying to go for that cheesy, awful dad joke banter that, somehow, served Buzz so well way back when. But, whether it be due to the fact that I’ve grown out of that sort of humour or that it just isn’t that good either way, it really failed to land with me. The confusing rules and repetitive mini games also didn’t help matters.

I eventually discovered that the point of Jump Stars is to work together with your opponent(s) to gain enough points in order to progress to the gauntlet, the game show’s final mission. But this really wasn’t translated all too well and we spent a long time on our first game quite confused about what we were actually supposed to be doing. Where we on the same side or meant to be pushing each other off ledges?

As the title may well suggest, Jump Stars is all about jumping, and all the mini games I played centred around this. There was jumping up falling platforms as lethal goop began to rise. There was jumping other swinging obstacles. There was jumping into your competitors. There was jumping onto colour coordinated blocks to earn points. To be honest, there was far too much jumping. Every game I managed to play was solely about jumping, or occasionally jumping while pressing Square which would mean you’d jump to the side and hopefully hit an enemy (allie?). Jumping does get a little dull after a while. I know it’s the title of the game, but there just has to be some more variation and interesting ideas to keep things fresh. Sadly I didn’t find any and didn’t really enjoy any of the mini-games. Due to only having two controllers, I was only able to play with one other person and Jump Stars allows for up to four people to compete in the game. Perhaps a lot more frantic fun would have been found if the roster of players was complete, but there was nowt I could do about that!

I also think Jump Stars was nicely presented. There was lots of bright colours, constantly moving stages and, even though I didn’t find the host funny, I could see kids enjoying this.

But ultimately, as a co-op game Jump Stars failed to entertain me or the friends I was playing with and everyone was soon asking me to turn it off.

Bright and colourful
Kids could enjoy this

A quiz game that does little to hold your attention after the initial impressions.