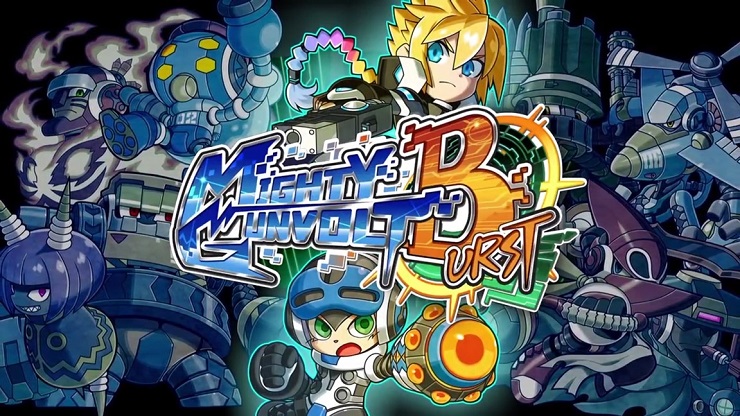 The 80s and 90s were home to a stream of action games featuring protagonists with dumb names running, jumping and shooting their way through collections of dangerously shaped pixels; the year is now 2017, and we’re getting them again en masse.

Our stupidly named protagonist on this occasion is Gunvolt, and he runs, he jumps and he’s got a gun. There’s some sort of storyline involving our hero ending up in some bizarre alternate world he doesn’t recognise with some nonsensical reason that he has to fight to get out. It’s not like this matters a jot as the majority of games from yesteryear had completely hokey stories that you could safely ignore, and this is no exception.

Gunvolt itself is basically Megaman reborn, as if to hammer this home the game features Beck from Mighty Number 9 as a playable character as well as a boss approximately two thirds of the way through. Bosses are borrowed from Mighty Number 9 as well, with many of the ‘Mighty’ units featuring. Unlike Megaman though, while Gunvolt is tough there’s a reassuring ease to it thanks to generous checkpointing that doesn’t drop you too far from where you died and with full health and all the food items gathered up to that point; at the end of the day you may be slamming your head into a brick wall on some sections, but you’ll be secure in the knowledge that when you pass them that you’ll not have to go through them again. There are many of those moments where you are on the verge of giving up, over and over again I said to myself ‘This is the last time I’m doing this,’ only to be encouraged by the fact that I managed to get a bit further and as a result have a few more goes to get through it. There’s always a way through the frustration, you’ll eventually get there, it’s just maintaining that positive mental attitude that’s hard. That’s not to say there aren’t some parts that are unfair, there’s a segment with invisible platforms which really tested my patience, and another with a shifting colour background which carries through to the boss fight that makes some attacks all but impossible to avoid.

What is different with Gunvolt is how you can change your weapons. Each level unlocks new elements for your weapon or the resources required, known as CP. Before each level you can customise your weapon in a multitude of ways, such as bullet size, time to dissipation, speed, trajectory and elemental effect. I ended up customising mine to fire three bullets at once in a spray allowing me to wipe enemies out if I was close enough to them. This then played into the game’s burst function which can be comboed to higher numbers allowing for bigger scores to be racked up. Some of the latter weapon unlocks deal more damage based on your burst combo, giving a nice risk/reward mechanic. The retro art style is nice and the chiptune music is fantastic, one thing that I wish had been kept in the past though is the slowdown. This isn’t a visually stressful game, yet when you have three enemies on screen and Gunvolt’s shield up the whole thing grinds along to the point you worry your 3DS could be about to explode. I’m being serious, I’m using a *new* 3DS XL and the game slows down worse than Hyrule Warriors ever did. For a 2D title that requires quick reactions this really isn’t good enough. It doesn’t happen with great regularity, but it’s horrendous when it does.

Gunvolt’s not going to win any prizes for originality and it’s certainly not the most well optimised game to come out. It’s tough – teeth grindingly so at times – and it can be sadistic in its execution, but there’s never a point where you cannot see the light at the end of the tunnel and a whole range of other optimistic clichés. This sort of game isn’t for everyone, but those hankering for a bit of Megaman action who felt let down by Mighty Number 9 may find a hero to get behind here.