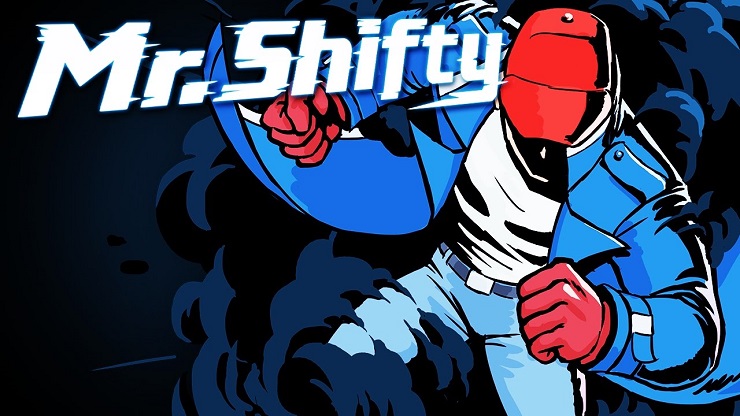 I pause outside the door. I know that there are five guards with guns trained on the other side. I punch the door, hard. It hurtles across the room, taking out the guard directly opposite in a shower of splinters. The others go to fire, but in a cloud of black smoke I’m already gone, only to reappear behind another. A couple of swift hooks knocks them to the floor, and I’m gone again, this time materialising in an adjacent office. The remaining three know exactly where I’ve landed and are already on their way…

These are the types of high-pressure encounters that can make Mr. Shifty absolutely thrilling.

The titular Mr. Shifty is a thief with two very useful abilities. Firstly, he can punch like a jackhammer, which is good as it’s his only real form of subduing the hundreds of gun-toting goons patrolling the tower of evil businessman, Donald Trump Chairman Stone. Secondly, he can shift (teleport) short distances, even beyond walls, which makes his mission of stealing weaponised plutonium from this fancy labyrinth full of cronies, lasers, mines, and other dangers a whole lot… well, not easier as this is a challenging game, but certainly possible, and fun. Sometimes frustrating, too, but in the good way.

From its top-down viewpoint, one-hit deaths (for the player), quick restarts, and focus on fast, rhythmic melee combat, the influences of developer Team Shifty are abundantly clear, taking a few cues from the brilliant violence ’em up, Hotline Miami. The simple teleporting mechanic, however, provides enough to make the experience feel fresh, while some terrific level design compliments it wonderfully, allowing for countless moments that made me feel equal part genius and badass. And while Mr. Shifty only really has these two core abilities (punch and shift) it’s remarkable how their benefits and purposes can differ from moment to moment; sometimes Mr. Shifty is a combat gauntlet, sometimes it’s a puzzle, sometimes a frantic test of endurance, and it never left me bored as a result during the 2-3 hour campaign.

Teleporting, Nightcrawler-style, couldn’t be easier, though you can only do it five times in quick succession before a cooldown period kicks in. There is a cursor that sits a couple of inches in front of Mr. Shifty at all times; press the shift button and he’ll quickly vanish and reappear where the cursor was. Early on, this allows you to teleport satisfyingly from goon to goon, laying down hits before they can draw a beat on you, but once the types of attacker get more varied and numerous, you really have to think more about your strategy, shifting to and from cover, to flanking positions, and smartly using the rooms to divide and conquer big hordes of foes.

Regardless of defensive options, Mr. Shifty also deftly rewards the brave, encouraging you to keep attacking with its bullet-time mechanic. Stay on the offence, chain together takedowns and you’ll build up a meter that, once full, allows you to enter slow-motion, kicking in automatically if you narrowly avoid being shot. It’s an effective, well-balanced risk and reward system; the risks being that if you ease off your momentum, the meter will deplete unless already full and, more obviously, Mr. Shifty will be in the firing line more often. It’s a system well worth utilising, though, as it got me out of more tight spots than I care to admit. And many times it didn’t. Much like with Mr. Shifty’s inspiration, death comes quickly and often, but it’s never unfair. Death is a lesson: about where the enemies patrol, who might get the jump on you, who might come running if you kick up too much of a ruckus. Working out every facet in this way, honing your skills and getting through an area perfectly is massively rewarding, especially in the latter stages when things get really hairy.

The best moments came when I learned to use the environment to my advantage. Kicking a door off the hinges into enemies never failed to feel awesome, especially if I managed to follow it up by clearing the rest of the room unscathed. Improvised weapons can be found, such as ornamental oars or brooms, which can help with crowd control on large groups until they break, and many items can be thrown to score easy kills; brilliant for surprise attacks to quickly disable the most dangerous of those in front of you (pro-tip: mines can be thrown too).

There are some neat environmental effects, some absolutely cosmetic but still really cool, like punching a bad guy out of a window and seeing him plummet below, which, frankly, I failed to grow tired of. Others can work against you: teleport into a room next to some goons and you might accidentally smash the furniture, making noise and alerting them to your presence. Practically all environments are destructible too, meaning that your cover can be eroded as bullets and explosives continue to fly, which helps keep the action moving at an enjoyably frantic pace. Elsewhere, Mr. Shifty fares a little less well. The cel-shaded visual style is merely functional. I mean, it definitely succeeds at conveying all the necessary feedback that the gameplay requires, but I couldn’t help finding the environments a little bland. The soundtrack too is in that ‘perfectly inoffensive but not overly impressive’ bracket, with fairly typical spy-genre fare; if it changes at all over the 18 levels (other than being a tad muted in areas where your powers don’t work), it wasn’t enough for me to take notice. It did just enough to keep me in the rhythm of combat, but other games certainly do this more effectively.

Sadly, I did also encounter the occasional frame drop on the Switch, and while I can’t remember it being the cause of death at any point, it did create the odd moment of disorientation and loss of rhythm. I’m reliably informed by others that these issues are not present in the PC version.

Despite these criticisms, two of which could easily be put down to a matter of taste, I had a really fun time while it lasted. Using Hotline Miami’s blueprint as a solid base, Mr. Shifty adds one simple trick of its own and uses it extremely well, providing much to keep players on their toes amid its frantic action, while offering a rewarding challenge worth experiencing.

A solid riff on Hotline Miami, but with its own, fun spin.