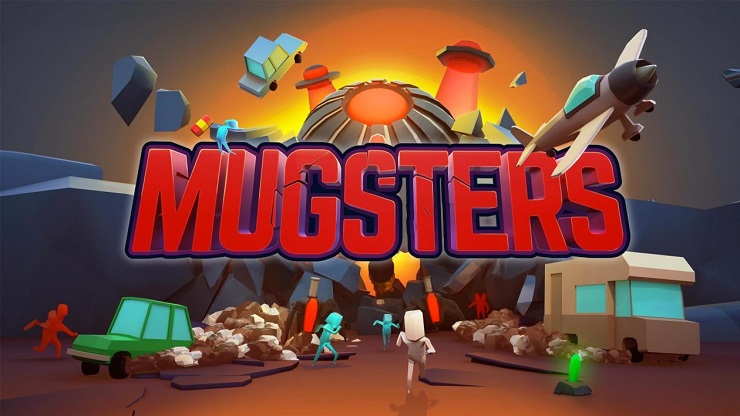 Firing up Mugsters for the first time, I had no idea at all what to expect. Normally the title of the game gives some clues, but Mugsters leaves much to the imagination and doesn’t allow the player to ascertain anything about the game without actually launching it for the first time. Starting a new game places you into Mugsters’ homeworld, essentially a menu system where the player is afforded free movement to play around with the controls and mechanics before actually jumping into a level. This is where the first odd point of Mugsters comes into view; there’s no tutorial of any kind.

Normally, especially with a puzzle game, there’s some semblance of hand-holding to begin with that shows the player what they’re expected to be doing in order to complete each of the puzzles. Moving and jumping are probably common enough these days that that doesn’t need to be mentioned, but something like knowing that you have the ability to pick up items and throw them, or get into vehicles and drive them around, would have been useful to know before I spent 20 minutes wondering what the hell was going on. This lack of information could be a positive for some people – who like to work things out for themselves – but I can definitely foresee other people finding it more than a little frustrating. The aim of Mugsters (which I figured out after looking at the objectives in the often difficult to read font, and running around the map for what felt like an age) is, at its core, to escape each island. Each level has three objectives which are technically optional, rescuing the humans that are trapped inside tubes, collecting crystals that are scattered across the map and then a third objective that usually involves destroying something within the map (satellites, fuel tanks, relays, etc), but the only objective that really means anything is finding a way to escape the island. The camera, while simple enough to control with the right analog stick, can be frustrating at times. There’s no way to zoom the camera in and some of the items that the player is expected to interact with can be quite small; making them difficult to see with the camera’s only zoom distance. On top of that, if there are multiple players in a level, it’s quite easy to lose which character you’re controlling as each character just ends up being a white blur with a slight bit of colour from the four customisable options of hair, backpack, shoes and cape (which can be added using a machine in the homeworld that is never explained, and the colour can’t be customised in any way).

Visually speaking, Mugsters is quite an appealing little game. Using a low poly art style reminiscent of games which are usually found in the mobile space, Mugsters uses very little detail to convey the game’s world and the elements within it, however, that works to its advantage as it’s almost as if it’s pushing the player to concentrate on the puzzles themselves, not spending too much of their time gawking at the surroundings. All of the emphasis has been put into the gameplay itself; and it shows. The audio in Mugsters is a little hit-and-miss at times. While the sound effects are good – with especially the explosives providing a satisfying auditory treat – the music which plays in the background is quite repetitive and can get a little annoying after a while. I ended up turning the music volume down (which is the game’s only setting in the otherwise sparse “Settings” menu) as I had much more enjoyment from the sound effects than the music.

Despite being a game that could be difficult to pick up for some people, due to the aforementioned lack of a tutorial, it’s certainly a game that’s difficult to put down. The main objective of each of the levels – leaving the island – might be a non-challenging task, but leaving the island with all of the objectives successfully completed will be a trying task for even the most avid of puzzle gamer. Most of this challenge comes from the design of the puzzle themselves, which will keep some people scratching their heads for a few minutes before finally landing on the “A-ha!” moment, however, it does have to be said that the AI of the rescued humans leaves MUCH to be desired. When the player rescues the humans in each level from their experimentation tubes, they will follow the character around the map until they’re escorted off of the island at the level’s end. This seems easy enough. The trouble lies in the fact that there’s no way of telling the following humans to just wait in a spot, they will always attempt to follow you, and given that their pathfinding AI seems to be a little lacking, they will often fall through gaps as you’re jumping over obstacles, get caught on pieces of the environment as you’re walking around rocks, or any number of other scenarios; which ends up causing quite a bit of frustration.

Despite the positive implementation of Mugsters puzzle and physics mechanics, the Multiplayer component smacks of lazy development. When you jump into Mugsters with another person, you’re afforded the opportunity to play through the exact same levels as the single player portion, with all of the same objectives. It’s basically a copy/paste job without anything that would make it worthy of its own separate section of the game. You’d get exactly the same experience if you just allowed a second player to drop-in or drop-out of the main game. There could have been a tremendous opportunity to add some multiplayer only style puzzle elements – in a similar way to how Portal 2 manages it – but that’s not the case here; which, unfortunately, is more than a little bit underwhelming.

Mugsters is a game for people who enjoy puzzle games without much flair or fanfare about them. The emphasis is clearly on the puzzles themselves and, despite a few stumbles, Mugsters proves to be an entertaining game that’s easy to come back to and somewhat difficult to put down; and with a decent amount of levels, with multiple objectives in each, you’ll be spending quite some time getting lost.