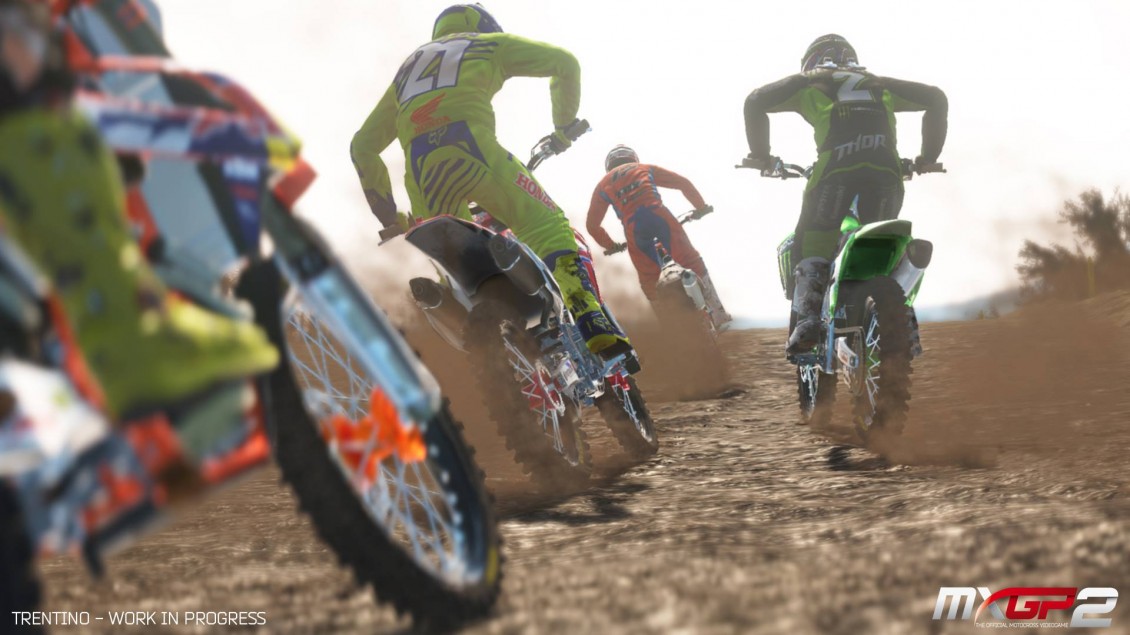 When Milestone released Sebastien Loeb Rally Evo, it managed to almost perfect the mixture of simulation and content and we had a lot to recommend about it. With MXGP2, Milestone have again opted for an experience with a plethora of options which will no doubt keep you busy for hours. Whether you will want to play for hours is another matter entirely.

From the off, you’ll have get the chance to name your character, decide their nationality, even customise their helmet: everything you could want in order to make your challenger your own. From then on it’s up to you to decide if you jump straight into the single player or try your hand online in the multiplayer arena. I spent the majority of my time in single player mode, in order to hone my skills on the muddy peaks and troughs.

The single player mode gives you access to a straight motocross grand prix, an extensive career mode, the Monster Energy Motocross of Nations and a Stadium Series. Real Events allow you to play through major events in MXGP history where you have to fulfil certain conditions in order to complete them. Finally you have a test track to practice on and believe me when I say you’ll need to practice. Career mode gives you the chance to start from the bottom, not only selecting your team but also your sponsors as well. Sponsors normally set conditions on the outcomes of the race, and their and other sponsor’s interest in you will vary dependent on your overall performance. As you progress you will find interest in you will change and more often than not, you need to maintain a level of consistency in order to succeed with them. Fail too often and your choice will be restricted for future sponsors and you’ll even get some snooty in game emails from the management team. It’s all part of the immersion that Milestone has attempted to bring to MXGP2 and for the most part it works extremely well.

You’ll take part in practice laps before being timed fully to decide on your starting position in the race. The higher the position, the closer you’ll start on the left hand side of the line and therefore the closer you will be to that all important first corner. Stadium races take place completely indoors, making for some interesting layouts to race around and also provides a more claustrophobic atmosphere. Real Events and the Monster MXON will have you play as recognised riders from the sport and more often than not, you’ll be riding much more powerful bikes that will take some getting used to especially after playing using the standard snail paced efforts your provided in the career mode. Altogether the sheer range of tracks and activities on offer is staggering in terms of how much time you can spend on racing alone.

It looks like much of the original graphics has been recycled from the previous iteration as while it certainly does the job in terms of representing the tracks, the bikes themselves don’t seem to have any environmental impact, which feels surprising considering what the likes of Motorstorm achieved on the Playstation 3 so many years ago. Instead Milestone have opted to represent tire tracks using black lines which fade over time, so you never really feel like you are driving in the muddy bogs that Motocross is famous for. The lumps and bumps and ramps are there, but you’ll feel someone has gone around with some brown paint over a pile of perfectly formed paper mache. Your rider does get dirtier as you race, and you’ll need a strong washing powder by the end, because you will fall off your bike a lot as you get used the controls. It might be a good idea to bring some kind of strong coffee as while your boy is good on the steel horse, as soon as he leaves the saddle, he’ll turn into rag doll sleeping Steve and flop to the ground. It has to be seen to be believed. It’s funny the first time it happens but on repeated viewings, like any gag, it loses it’s appeal and it moves towards becoming annoying. Frustratingly, it increases the time before you are placed back on your bike to race again as you fall face first into the hard mud ground or get tangled up in the raceside signage.

On occasions the frame rate will stutter when there is a lot of action occurring on screen at once, usually when you hit the first corner and it is you and another twenty bikes. Other than that, there aren’t any noticeable graphical issues which couldn’t be sorted out with an upgrade to the graphics engine in the next iteration of MXGP. What does need to be sorted out is the bike handling which varies between providing moments of pure racing grace to bouts of rage-quit fever.

You have two brakes to control, front and back, as well as the ability to control where your weight on the bike is which is controlled by the right stick. Those used to a simple start/stop setup are going to be in for a shock. The bikes handle like prams on ice rinks one minute, to tanks on toffee the next. More importantly you’ll never exactly know when the switch takes place, and more often than not you’ll fall foul of things when you just need it to work. It doesn’t help that the default control layout places the more useful back brake on the face buttons, the one that the tutorial suggests you should be using to avoid sliding in the first place. So it is simply impossible to use the back brake and use the right stick to change your body weight on the bike at the same time without some kind of finger gymnastics. Luckily there is the option to change the controls, but even after that, you’re back to playing grip roulette while the riders around you seem to be able to take corners without even leaning over. There are simply too many times where you’ll take a corner with a group of two or three riders and you’ll end up leaning over too far only to be run over by another competitor. Or you’ll slide in the mud and into the side barriers while everyone remains upright.

Even in those situations where you manage a great start and you’re making great progress into the top five, the competition not only seem to be able to catch up with you, but overtake and pull away. This will happen every time on the straights even if you are keeping up with them on the corners. The vast majority of the time, falling back to anything near the back of the field results in a self induced restart of the race because you have very little chance of climbing back up the pack in that situation. You simply aren’t able to drive fast enough to catch up and it’s enough to make you walk away or wish you were playing any other racing game.

Milestone should have spent less time on the number of events they have included in MXGP2 and more time on making sure the racing experience was improved. You never really feel that you are doing well because you’ve improved, it’s more the case that luck has carried you to victory. It’s unfortunate for MXGP2 that the awful bike handling manages to sour the overall experience on offer. It’s a shame as it covers every available event in the MXGP calendar, making it a prospective veritable feast of motocross fun. While it might keep fans of the sport happy, those who are fans of racing games are likely to have switched off long before they’ve finished a season or two.

Bike handling needs to be improved
Last-gen graphics at times
What's with the zombie riders?

MXGP2 will be able to appeal to most Motocross fans with it sheer amount of customisation options and playable events but the most important part of a racing game, the actual racing, needs to be greatly improved.