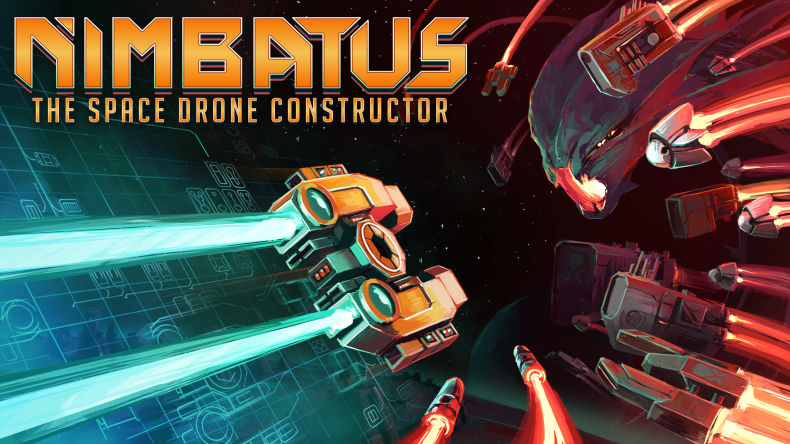 Remember FTL? Stray Fawn Studio remembers. I used to love exploring space, all the while trying to outrun the rebels in a bid to deliver vital intelligence to the Federation. It was great, especially having to make difficult decisions that may result in fatalities for your crew, knowing that you couldn’t simply reload and try again. Consequences were at the heart of the game, as well as reproducing the feeling of commanding a starship, getting into Star Trek-like ship-to-ship battles.

Nimbatus – The Space Drone Constructor (doesn’t exactly roll off the tongue, so we’ll just call it Nimbatus from now on) begins with a similar concept, as you have to outrun the Corp. But instead of managing a starship, you’ll build drones and pilot them as they undertake a variety of missions. Some are extremely dangerous, others offer almost no threat whatsoever.

Nimbatus’ gameplay is essentially split into two parts: getting the Nimbatus ship from wormhole to wormhole, avoiding the Corp, and the building/piloting of drones to complete missions. Much like FTL, plotting the Nimbatus’ course through each system is a risk/reward thing. The more you explore, the greater the chance of the Corp catching up to you and taking a chunk out of your flagship. Each time you head through a wormhole, the threat level drops as you momentarily shake your pursuer. Within each galaxy, you will have to complete missions on a set number of planets before you can head to the next system, which then requires more missions before moving on. And so on, and so on, until you reach the wormhole out of there. Between systems, it’s entirely possible to run into random encounters, such as checking out a derelict ship or being beset by pirates. Your choices here can yield great rewards or increased danger, so you best be sure before you make the decision. You could end up alerting the Corp, if you’re not careful.

Once you’re in a planet’s orbit, you’ll know what mission you will have to complete once you’re down there. These range from finding black boxes in early missions, to taking on giant space worms and destroying various things. Sometimes you will need to gather resources of some kind, but every single objective will require the right drone to accomplish the task.

This is where your imagination is the limit. Well, eventually it will be, anyway. You will inevitably start with the most basic-looking things, with limited inventory and funds (the more parts you add, the more resources it will cost to send it planetside) but as you unlock new parts and upgrades, you can end up with gloriously over-the-top creations that are more starfighter than drone. You can save drone designs too, so you can have something for every eventuality.

It can get a little complicated, however. Each interactive part of your drone needs to be activated, which means assigning a key to do just that. If you want to turn, you’ll need at least one thruster on each side, each with its own key to light it up. What about shields? Yep, they’ll need a separate key to be held down to keep it going. Weapons are a little more simple, as they will shoot in the direction of your mouse cursor, so I chose Mouse 1 for that task. Except I also had drills on the front of a drone, so I assigned Mouse 2 to that task.

If that all sounds a bit confusing, that’s because it can be. On that same drone, I also had a resource collector that needed another key to vacuum up all those precious minerals. This isn’t even taking into account the ability to attach a mini-factory to your drone, building smaller drones that you can remote pilot. While still piloting the main one. It can all get a bit hectic, especially as the inertia/physics-based movement isn’t exactly accurate. When you’re being pulled down by a planet’s gravity, while trying to avoid the giant snake that’s chasing you, as you simultaneously engage in a dogfight with aggressive fauna, it can be a real struggle. It gets worse when you’re on an overheated planet that can effectively melt parts of your drone, breaking it apart, beset by tiny fire bugs that can barely be seen as they cling to your hull. Between the awkward controls/physics and the difficulty spikes, Nimbatus can be a bit harsh while playing in Survival mode.

Thankfully, Sandbox mode offers a far more laid back, creative way to play. Don’t want like the constant threat of the Corp? Remove it. Don’t like your drone-building to be so limited? Simply remove those barriers. Sandbox is here specifically to tailor the experience to the player, and let their imagination run wild, to create the most ambitious and ridiculous machines possible. You’ll still be able to explore the various systems, but at your own pace and even setting your own objectives, if you fancy it. Or you could even just use it as a testing ground for new ideas, without having to worry about spending resources or increasing the threat of the Corp discovering the location of the Nimbatus in Survival.

On the surface, Nimbatus looks a little like an homage to FTL, but thirty minutes in and you’ll see just how different the core gameplay is. An hour in and you’ll be coming up with ideas for your next drone revision, or building an entirely new one. A few more hours and you’ll be caught in its addictive, highly creative grasp, enjoying the near limitless potential of drone building. Or cursing the Corp for getting in the way of your exploration needs.

Awkward to control
Difficulty spikes can be harsh

While it might initially seem a bit overwhelming, the creative potential in Nimbatus - The Space Drone Constructor is mind-bogglingly fun.