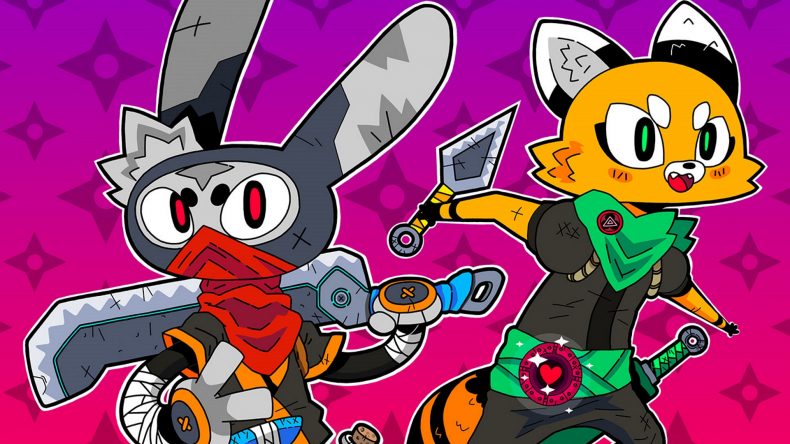 When you think about it a lot of games revolve around food. Donkey Kong goes on a rampage against King K. Rool when he steals his bananas, Bowser has been known to kidnap Peach just so she can bake him a cake, and I’m pretty sure Robotnik would have been much more chilled with Sonic if the two had just gotten a takeaway pizza or something, and it probably explains why he felt compelled to build his mean bean machine. Either way it’s a common theme in games, and so when our hero Ninjin’s village is under attack, and the bad guys go after their horde of carrots (and with rabbits, it is always carrots for some reason), it feels very familiar. A good, solid story of food theft that we can get behind.

And in Pocket Trap’s adventure Ninjin: Clash of Carrots, the way in which we’re going to get those carrots back is through the good old-fashioned method of slashing up all the enemies in our path until we finally track down who’s responsible and make them pay. Players take control of Ninjin and must give chase by completing levels on the world map to progress after the thieves. Each level is made up of waves of enemies which you must defeat before moving onto the next. Complete all the waves in a level before your health runs out and that level is done. Sounds simple, and that’s because it’s a fairly standard and has been done before. But the charm of this game starts to reveal itself from the outset, when you’re learning the basic controls. You’re given free movement around the screen to attack enemies, but it’s worth noting that your attack swing of your weapon is always to the right, meaning placement is important before attacking. You are also afforded a dash move, which similar to say, Dead Cells, is your invulnerability window to get out of trouble, should things get a bit hairy (furry?). Press both attack and dash together and you can do a charge attack in any direction you choose, and gives you the option to attack in a different direction to the standard right side direction, meaning there is already timing and movement tactics at play here to give you the upper hand.

Throw in (literally) a projectile move controlled with the right analogue stick, that allows for distance fighting, and 360 degree control over its direction and this might start to sound like you’ve got too much at your disposal for anything to pose a threat right? Well, then the game starts reigning you in a little. For starters you have a stamina meter, which depletes after every swing of your weapon, projectile throw or dash move. And it only starts refilling after a pause of you not doing any of these things. Find yourself low on stamina mid-fight and you’ll find out the hard way what that can mean to your health. Speaking of health, it doesn’t refill between waves, and once it reaches zero, you have to start the whole level again, irrespective of how far you progressed. Although certain mini rewards of health are awarded between waves if you take no damage or manage a pretty big combo of attacks. What this all adds up to is an experience that is deceptively deep and tactical despite its simple exterior. What manages to keep the gameplay enjoyable and fresh is the variety of each of the waves and levels, thanks in no small part to the large supporting cast of enemies in the game, each requiring slightly different tactics to take down. They range from enemies who fire rabbit-seeking projectiles or bombs, to those that charge at you when in line with you, to some ghostly cat apparitions who if they get too close begin to suck your stamina from you (who I am personally reserving a special place in hell for!) And as each new one is introduced, there’s a quirky little piece of intro music showcasing their name, before you’re thrown back into the carnage.

And quirky is a great way to describe the humour overall, whether it be your master offering you helpful (read: condescending) tips after each death, or if your performance in a particular level wasn’t up to scratch. It’s also showcased in the little skits you see play out with Shogun Moe, the mastermind behind the carrot theft, and his minions, as each of them falls foul of Ninjin as he progresses, and the understandable frustration and disbelief that follows. It provides a sense of charm and whilst not side-splittingly funny, it is endearing enough to make you want to read each exchange and hear each side comment as you progress.

The way the game aids you in said progress is through utilising all those carrots you collect throughout the levels as a form of currency to spend in the shop between levels. Here you can buy different melee weapons, some of which may have different swing speeds, reach and power, meaning there’s different strategies to each one. Projectiles can also be swapped in and out of your loadout, and can have different effects, such as bouncing off of or piercing enemies, and have different power and stamina costs. You can also equip items that give you passive perks, such as more health or stamina, or faster recharge of the latter for example. It means that not only does it reward your progress, but it rewards experimentation and tactics ahead of battle as well as when you’re in the thick of it. Having the right loadout can make all the difference to your success in a level, and adds another layer to the game. There’s even special items you unlock later on in the game which can give you an even bigger advantage after you’ve filled up their meter. What offsets this is undeniably the level of challenge in the game. This game is a hard one at times, with enemies swarming the screen, and often in combinations that seem downright evil. But this game is fair despite its hectic nature. A swing of a sword will always hit as it should as will your projectiles. If you miss, and get hit, chances are it’s your fault, if you run out of stamina and get caught out, then again, look no further than the mirror to find who’s to blame. It means that this is a game undoubtedly of trial and error, as you strategise how to beat certain waves, and it makes completion of the levels even more enjoyable as you finally overcome them. I will say though that sometimes the learning curve in this game can be a bit erratic, with some waves feeling easy and those either side feeling borderline impossible, at least at first. And whilst that’s not a deal-breaker, it does sometimes make the feeling of progression a bit diluted.

As such, the game is fairly good value for money for its £11.99 price tag, there’s plenty of levels and waves to get your teeth into, and plenty of challenge for those looking for that. Also for the completionist in you, you get ranked based on time, how much damage you took, your accuracy etc for each level, and so there will be those wanting to go back and redo levels with better loadouts to try to get all those elusive S rankings. But that’s not all, there’s also a survival mode unlocked fairly early on in the game, where you fight against endless waves of monsters, with just the starting gear. The twist is after every 3 rounds, you get an upgrade to use in your loadout for the rest of the trial. For every 10 rounds you pass you earn a chest containing a free item you can use in the main game. Die once and it’s over. It’s a nice addition to the game, but can also serve as a break from a level you may be stuck on, and can provide you with items that may improve your loadout for future levels, so it’s well worth a look. Whilst mainly a single-player game, you can play two-player local co-op, where a friend can take control of Ninjin’s friend Akai, and you can double up against the enemies, allowing for an easier ride. There’s also the option at the beginning of each level to go online. However due to there being a lack of people online before release, I have been unable to test how well this works. I assume it is just taking the 2-player functionality online rather than local multiplayer. Should it prove to make a significant difference to the game, I will update this review post-launch accordingly. The local co-op as it is works as you would expect, with two heroes carving up the enemies, and helps for the enemies to have two targets for enemies to aim for, meaning each of you theoritically gets a little more breathing space. And whilst strategies between the two of you are possible, often the sheer frantic speed of what is going on, means this is more reactive playing than proactive planning.

On the face of it, Ninjin: Clash of Carrots feels like another throw-away 2D hack and slasher, but it’s so much more. Like the carrot the game so overtly covets, the green stalk of a game peeps through the surface, but the real flesh of the game is underground ready and waiting for those willing to take the plunge and pull it from the earth. There’s so much more than meets the eye, be it the myriad of weapons and potential loadouts, the sheer number of monsters, each requiring different tactics to overcome, or the clever way it tweaks the levels to make each one a different type of challenge. All this whilst managing a health and stamina bar through the chaos, and you have a game that commands respect and patience in equal measure. But like similar challenging games, it has that feel good factor upon beating each level, to keep you interested throughout. Sure the learning curve is a bit erratic, and yes the format of single screen fighting naturally has its limitations to how truly innovative the levels can be, but aside from those niggles, this is a game that is well worth getting your paws on.

Erratic learning curve at times
Can be very difficult at times

A quirky and charming beat-em-up with plenty of variety, strategy and humour. If the challenge doesn't put you off, you'll find yourself having having a great time.