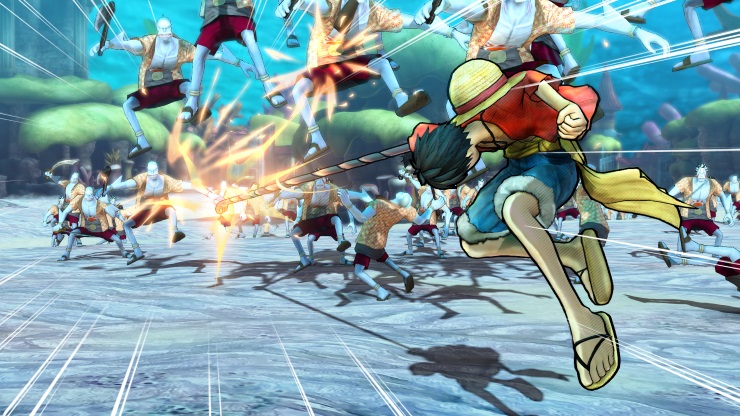 My experiences with Monkey D. Luffy and his Straw Hat Crew were eventful, intense, exciting and unforgettable. Not only was I challenged on a constant level, but I was also taken in by the beauty of the animation and vibrant environment. Despite having had no exposure to these games in the past, I found it relatively easy to pick up and had an absolute hoot in doing so. That isn’t to say the game doesn’t have its flaws, and being impartial with my thoughts on this newly discovered franchise and having no real concept of its past and other incarnations, I was able to see the peculiar faults and issues without forgiving them as just being part of the Pirate Warriors lore.

Thankfully, I found some familiarity with its anime roots. As the opening cinematic started up, I couldn’t help but raise a smile. With other Japanese-based video games I’ve played (mainly Persona 4 Golden), the over the top electric guitar/trumpet combo ran rampant as I was introduced to a plethora of characters that acted as a visual chapter list all jollied up and fueled with whimsy. The overall look of Pirate Warriors 3 makes you feel happy and at ease in its colourful world, albeit slightly weirded out by the odd looking characters. Some have eyes that just don’t look right on their faces, and a couple of the still animations in the manga cut scenes didn’t feel in sync with the Japanese dialogue. Nonetheless, it’s still pretty to look at and full of bold and bright colours that warm the soul. The story itself spans across all the One Piece anime, manga and video games. As someone who doesn’t really have a clue about any of it, I found the story well-paced and smart. Underneath the brash, uncouth ramblings of its villains and the naïve, foolhardy visage of its heroes, exists a sweet and emotional core that teaches lessons of friendship and sacrifice. One Piece: Pirate Warriors 3 doesn’t give you much time to learn the ropes or practice the basics. I had to pause the game and spend a good twenty to thirty minutes reading through the combo list and battle menus, making sure I had an adequate grasp on what was about to unfold. Within seconds of entering a battle, you are told a few simple controls before waves of enemies (literally, hundreds upon hundreds of them) attack you and those combos in your menu come into good use. In the prologue alone I’d slaughtered 3089 bad guys. 3089!! Killing in this game is like crushing grapes with your feet; you squash them with ease and cover vast amounts with a few taps of the two attack buttons. The newly-implemented Kizuna Rush feature is one of the highlights in Pirate Warriors 3; when you and your team have executed enough combos and enemies, you are able to use an effective manoeuvre with up to five of your teammates. The Kizuna Rush activates a short animation, followed by a furious attack that knocks out everything on screen. I found it highly effective the further I progressed, as some of the bosses you encounter can be tricky to defeat dependent on who you’re fighting with.

The main goals are pretty much the same in every level and it is the repetition of these arduous tasks that started to grate on me somewhat. Fight your way through an area and liberate the villagers, protect these territories whilst trying to stop members of your team from fleeing under pressure and defeat the boss. Every now and again you get a menial job to do, such as destroying switches and evading bomb attacks from the skies, but they only really get in the way. Frustratingly, the map markers are ambiguous to say the least; in the heat of battle you will be given a new mission; however, the location is buried under all the other markers. The map shows your enemies, your allies, current objectives, villagers that need rescuing, pirate captains that need slaying, territories that need acquiring, exclamation marks for the side missions and loads more – pretty overwhelming for a newcomer to the franchise. When running from one area to the next, I couldn’t watch the character move as the camera angles were a constant nuisance. The only real way for me to get from A to B was to watch the relatively large green indicator on the map. This was a pain as it took away many chances to take in the scenery and all of the beautifully designed levels. I also found that if one of your teammates flees the scene, all your progress in that level disappears and you are forced to start all over again. It was deeply frustrating to watch all that hard work go to waste, and the prospect of doing it all over again occasionally stopped me from continuing.

That being said, the good does outweigh the bad. There are tons of different modes and upgrades for you and your comrades. One Piece Pirate Warriors 3 has a light RPG element to it, with your stats growing with every level. You acquire special coins to help level up your character, and the distinctive form of currency called Beli can be spent on all manner of things. There is a mode called the “Dream Log”, which is essentially a gauntlet-style battle. You fight your way through hordes of soldiers and pirates to earn new items and new characters in the process. In fact, there are certain characters in the main game that you can unlock to use in this mode. The “Free Mode” is another road for you to explore, which is fundamentally the main story, except you can play as all of the characters you’ve unlocked up to that point. You may even get a call from another player somewhere else in the world while playing – if you ever get an SOS alert or even need help yourself, just press the middle pad of your controller to access the multiplayer and work with a stranger or a friend to take on the game together.

Great story and game design.
Wide variety of modes and options.
Combat is smooth and responsive.

A sprawling beat ‘em up with great replayability and loads of content for both fans and newcomers. Don’t let the messy camera put you off.