previous
Tales Of Zestiria Review
random
next
Tales from the Borderlands: Episode 5 – The Vault of the Traveler Review
1 like 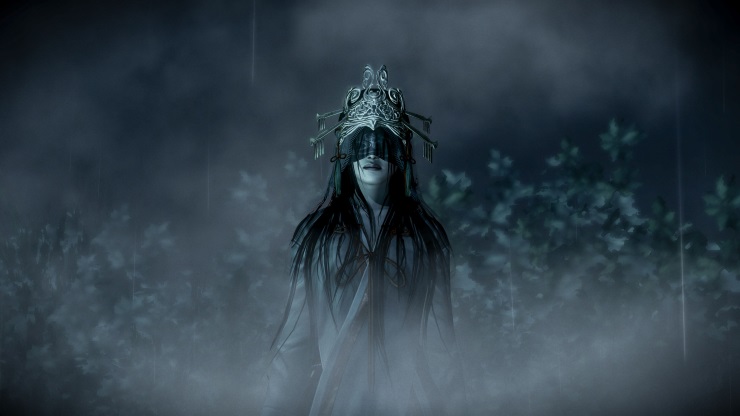 Known as Fatal Frame 5 in the east, the latest incarnation of Tecmo’s haunted mystery series is the first in the franchise to come to Wii U, and puts the GamePad to excellent use throughout.

The story centres on Mt. Hikami, a mountain that towers over a river valley and, more importantly, a small village with a disturbingly high suicide rate. As the setting for a horror game, it’s got everything: dark woods, eerie caves, all-too-tranquil lakes and abandoned buildings galore. It’s Japan’s version of Silent Hill, a rustic Raccoon City, a place that reeks of death and that no one in their right mind would journey to at night.

Luckily for us, the trio of protagonists are clearly not quite sane in the membrane, as they seem intent on poking at things best left undisturbed, in the dead of night, alone, unarmed (mostly). It’s a recipe for facepalm-worthy disaster, but it’s not something you’re encouraged to think to hard about. Their reasons for investigating Mt. Hikami are a tad cliched, but acceptable enough: author Ren Hojo has nightmares about a drowned woman, the Maiden of Black Water, and hires paranormal investigator and occult specialist Hisoka Kurasawa to find out what links him to Suicide Central. Hisoka and her apprentice Yuri have a powerful gift called “shadow-reading” that allows them to see and follow traces of the dead. When Hisoka initially vanishes, it’s up to Yuri and Ren to find her trail and uncover the horrifying truth behind the Maiden’s origins.

Both Yuri and Ren are armed with the famous “Camera Obscura”, a device able to see into the netherworld, capture images of ghosts and, if need be, destroy evil spirits by pulling apart their ectoplasmic residue. Or something. It’s explained, more or less, but ultimately it’s pure hokum designed to excuse the series’ central conceit of busting ghosts by snapping happy. And it does a damn good job, too, as the photography mechanic is excellent – especially when combined with the Wii U GamePad. The narrative is divided into stages, which usually start innocuously enough. Your protagonists arrive at the location full of wonder and trepidation, which will usually turn to desperate fear by the end. You’ll explore the area in third person, picking up glinting clues that help the character and story, but don’t mean much to you as a player. You don’t need to examine anything you find to work out what to do next; simply reaching an area or finding a collectible will usually be enough to trigger a cutscene or find the next shadow trace to follow.

This is the first of Project Zero’s issues: it’s very easy to feel utterly detached to what’s going on, and hard to care about the characters. You rarely feel that you’re in their shoes, and it’s almost like you’re watching it all unfold. As a result, you simply can’t shake the knowledge that it’s a game, which is terrible for the immersion. It’s not helped by the grading of each stage in the usual S, A, B, C template, awarding you points based on performance to spend on curatives, aids and camera film between levels. Once you get into the habit of actively trying to earn the most points, even the initially tense and creepy combat becomes just another points-based shooting gallery. There’s no denying that the atmosphere is unsettling in itself, but you won’t feel nervous for long with so much to occupy you. There’s also no fear of instant, gruesome death as with many modern horror games, as combat is either heavily scripted or signposted. Vengeful spirits rise at set moments to kill your protagonist for often unspecified reasons, or they’ll be drawn to you through the water if you get too wet. As you’re either knee-deep in water or getting rained on 80% of the time, combat is a little too common.

At first, fighting off the ghosts is exhilarating. As soon as you hear their tell-tale groan, you need to raise the GamePad like a camera and press X. At this point you’ll be looking through it, lining up the spirits with your viewfinder and taking pictures to defeat them. Every picture tears wisps of vapour from them, which will eventually return and rejuvenate them, so you’ll need to photograph them, too. Line up enough in a given shot and the lens will flash red, which allows you to execute a “fatal frame” and destroy the spirit for good. Sadly, it’s a little over-used, and what begins as a tense, exciting affair soon starts to feel tedious and a little irritating. New mechanics are introduced sparingly, and different cameras have varying uses (Ren’s, for example, can take multiple shots and strip a ghost apart quicker, but the film takes longer to reload), but it’s never as frightening as it wants to be. The trouble is, we’ve come along way since The Ring, and the whole “faceless dead girl crying black tears” has been done to death. There’s not a lot of real horror in Project Zero, and the psychological aspects just aren’t immersive and unsettling enough. I’m usually a mess playing horror games, but Maiden of Black Water simply isn’t scary. The slightly sluggish controls and overall slow pace aren’t great, either, sometimes creating a tension that feels artificial and forced.

It nails the atmosphere, and the story is compelling enough that you want to unravel the mystery of Mt. Hikami, but sadly Project Zero: Maiden of Black Water fails at the horror. An over-reliance on combat, jump scares that miss the mark, and a catalogue of trite cliches we’ve seen a hundred times before hold back what could have been a great game. That said, horror titles – or adult titles in general – are uncommon on Wii U, and so Project Zero has its niche, not to mention a legion of franchise fans who’ll be chomping at the bit for it. It’s just a shame it’s not scarier.

Great atmosphere.
GamePad is put to good use.
Compelling mystery.

Too much combat.
Not scary enough.
Too many "gamey" elements.

A compelling thriller that makes great use of the GamePad, but fails to truly scare or shock.