Tales from the Borderlands: Episode 5 – The Vault of the Traveler Review 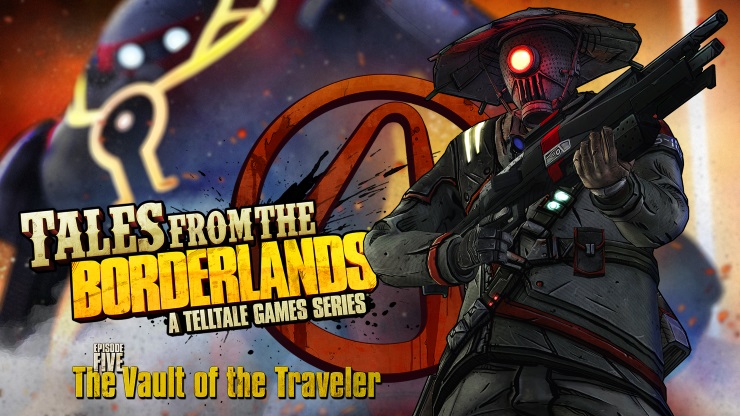 As is always the case, Telltale’s games are heavily focused on story. As such, this review assumes you’ve played the previous episodes, but won’t spoil anything from this one.

Despite a few misgivings in the penultimate episode, Telltale has delivered a finale that is fitting of the original premise, and in turn cemented Tales from the Borderlands as one of its best series to date, and certainly one of the best individual episodes it has ever made.

And it starts with a bang. This is one of the most action-packed episodes of anything Telltale has done, continuing right from where episode four left off. Jack has always been someone with psychotic tendencies, but he quickly goes dark with how murderous and mad he is. The voice acting that has been stellar all along is just as good here, and Dameon Clarke’s performance is violently dark at times, but still has that quirky twang that makes everything Jack says seem kinda funny. Dialogue choices give Rhys a chance to play it one way or another, but it’s nice to finally have chickens come to roost, personality wise.

In fact, it’s such a quick start that you almost forget about the trademark Tales from the Borderlands late credits, until it actually happens. And (this is becoming a theme) this moment is one of the best of the series. They’ve been fantastic throughout, but this one (nearly half an hour in) is pretty moving, and makes you wonder where it’s all going. Interestingly, one of the things I didn’t like about Escape Plan Bravo was that there were suddenly serious emotional moments that just missed the mark. In The Vault of the Traveler, there are plenty of the more serious moments for many of the characters (a surprising one with Jack which gives some back-story is very well done), but they are all delivered very well. Except, I guess, one near the very end that I can’t delve into, for obvious reasons. All I’ll say is that the joke is an obvious one that’s been used elsewhere, and thus loses the impact it could have had.

Speaking of comedy, the huge belly laughs of episode one, two, and three are still shunned slightly in favour or more subtle, cheeky one liners. There’s some insults that are worth a laugh, but there’s no one truly hilarious moment that stands out. Whereas that was something that negatively affected the last episode, here, because the emotional story beats hit harder, it feels right to put it on the back burner a little.

But the action is the best it’s ever been. Sure, there’s the “hammer Q” parts that we know only too well, but one battle has you using multiple inputs in quick succession, and I can’t tell if it’s a parody of a fighting game or not. Either way, it’s brilliant, and a massive moment that makes you feel a complete badass. In fact, I’d go so far as to say there’s not really a dull moment in the entire two hour runtime. Best of all, the decisions you’ve made throughout the entire series actually matter, though in a different way. Obviously I wouldn’t spoil it here, but there’s a moment after the midway point that directly ties into multiple choices from previous episodes. It’s damn awkward to talk around, but it’s interesting to see Telltale use player choice in a different way. Here, there’s no seams being pulled apart due to having to tie it all together, instead it uses those ties in a cool way, and one that makes me want to replay the finale multiple times to see potential different outcomes and dialogue choices.

It’s a dramatic finale, no question, that relies more on story and character to get it across the finish line than the humour I initially lauded it for. But as a whole, Tales from the Borderlands has been a wonderful series. When the credits roll, it’s almost weird to look back and think upon the characters met, who have lived or died, and where you took Rhys and Fiona from their humble beginnings to the bombastic conclusion. Quite frankly, Telltale has knocked it out of the park, and if there’s ever to be a Borderlands 3 from Gearbox, it’d be an utter travesty to not see Telltale’s characters appear somehow in that game – that’s how fantastic this is.

Not as funny as previous episodes.

A fitting finale for what might just be the best series Telltale have ever made.