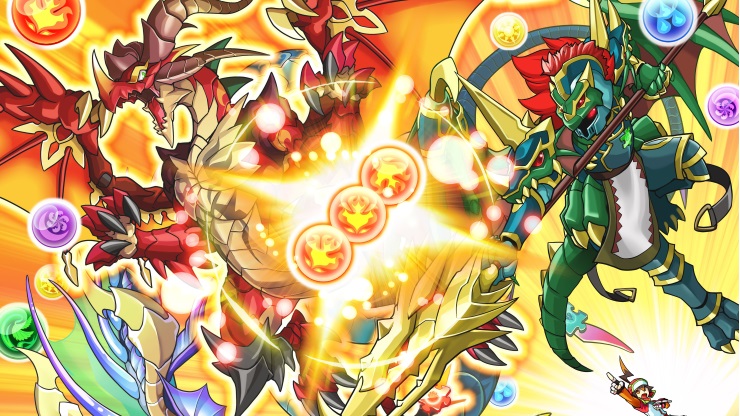 Gungho’s Puzzle and Dragons is a bit of a puzzle-RPG phenomenon. With downloads in the tens of millions, it’s a reason why many are trying their hand at the free-to-play game market. But rather than address the new Mario part, we should start with Puzzle and Dragons Z.

If you don’t know what Puzzle and Dragons consists of, where have you been for the last three years? Basically, it’s like a cross between Pokémon and Puzzle Quest: you start with three base monsters that have elemental attributes (Fire, Water, Leaf/Grass, Light and Dark) and you journey through dungeons matching orbs of colour in stacks of three or more to deal damage to enemies. The more orbs you match; the more damage that monster will do. Match several different colours and match many lots of orbs and you will obtain a combo, the higher the combo; the more damage your monsters will do on that turn. The free-to-play mobile version restricted your play time to five goes before you had to wait for the tokens to recharge, but here you can play as long as you want to. Gungho have furnished this with a rather run of the mill story about an organisation trying to tear down the current world and rebuild it in their image. It’s your usual evil group stuff. While some of the monster designs are rather nice, the character designs feel like they’ve been lifted straight from Pokémon or Yu-gi-oh, and the music sounds like it’s being played by a holiday camp house band. The whole thing feels like it’s been put together rather cheaply.

The main core of the game – matching orbs to deal damage and hearts to gain health – works very well, and there’s a satisfying feeling when you manage to string together a big combo and deal MASSIVE DAMAGE, it’s just a shame that it can be so frustratingly random. Look, I know that match-three puzzlers by their very nature are random, but it’s infuriating to see an eight string combo overkill three enemies when you only matched three orbs together, only to then see a two string combo go through when you attempted to make the most of a bad layout. This is especially frustrating against the bigger, tougher enemies later on, and can often feel extremely unfair. That said, I only got stuck once. There are some side quests, and later on a “Colosseum” [sic] opens where you can pit your team(s) against challenges to gain extra experience, so there’s no shortage of things to do to help get your levels up.

Interestingly, the Mario edition is a different beast. It incorporates the Mario game overworld style of individual worlds with levels dotted within. At the end of each world you get to fight a boss (twice), with a mini-boss part way through. It’s a structure that fans will be used to, so that’s no biggy. Similarly to Puzzle & Dragons you recruit enemies to fight alongside you, they have elemental attributes and you have to match orbs to deal damage to the enemies you meet in each level. The story here is even more throwaway, with Bowser having discovered the power of orbs then used it to kidnap Princess Peach once again. The problems from P&D are just as prevalent here, but they’re exacerbated by the game’s stinginess with upgrade materials. Enemy recruitment is rare, EXP gains from battles are low, and the materials required to make your creatures evolve aren’t common. Enemy AI is terrible as well. While they don’t match orbs to deal damage to you, they have a tedious insistence on using special abilities, while yours can only be used once a certain amount of turns have passed, giving you a significant disadvantage in pretty much every boss battle. Couple this with enemies that can deal more damage in one hit than you actually have, defensive abilities that don’t do enough to mitigate this damage, and the luck of the orbs going against you, and it grows tiresome very quickly. Grinding is barely an option either, due to the low gains to be had. You’re basically at the mercy of RnGeesus.

You can brute force your way through, thanks to the fact that the Mario Edition has an extra life system. This means that while you have them, you can continue where you died – but lose all your lives and you’re dumped back at the start and have to go again. It’s not too bad, but when you come up against several strong enemies in a row and then fight the boss at the end, you’ll most likely have lost most (if not all) of your lives anyway. Take into consideration the fact that these are also hard to come by, and you wonder why they bothered at all.

Mario Edition’s biggest problem, though, is that it doesn’t feel like a Nintendo game. Granted, it is made by Gungho, but it doesn’t have the charm of Nintendo’s in-house games, the enemy models are dull, and the Mario and Luigi soundbites sound dire and robotic. It’s a real shame.

Regardless of the issues, as a package this isn’t wholly terrible. It’s a decent enough time-sink, terrible story aside, and if you can bring yourself to grind through Mario Edition you’ll find much to enjoy here, but you’ll need to be prepared for several degrees of frustration.

Decent puzzling action.
No free to play rubbish.
Two games for the price of one.

Enjoyable and frustrating in equal measure, Puzzle and Dragons Z + Mario Edition is decent enough if you can grit your teeth and bear it.