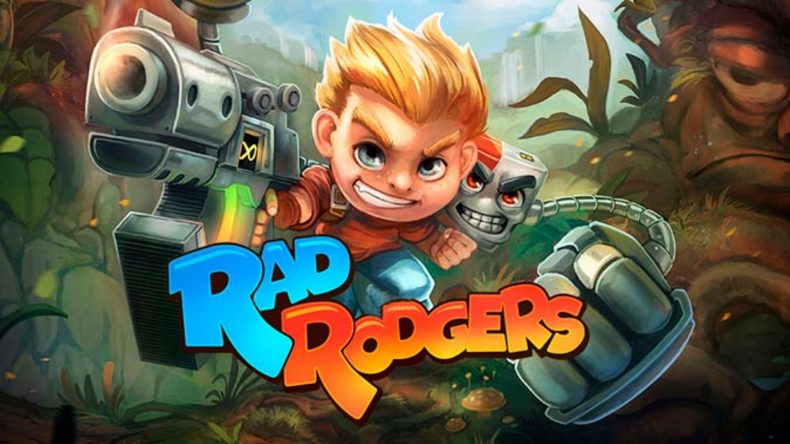 When it’s handled correctly, self-awareness in games can be quite entertaining. When a character repeatedly breaks the fourth wall or pokes fun at the world they’re in, it can raise a smile or two. It takes a certain amount of finesse on behalf of the writing team, though, or it comes across as cocky and facetious.

Rad Rodgers, sadly, falls into the latter category. Previously released on PC just over a year ago, this side-scrolling platformer features a little blonde 90s kid named Rad who gets sucked into a living game-world along with his sentient console, Dusty. The gossamer-thin premise is then stretched to breaking point as Rad shoots his way through a pile of industry-standard levels while Dusty hangs around in the background providing utility and needlessly offensive narration. In the meantime, you’ll be guiding Rad through some pretty-if-dull stages, shooting everything you can and trying not to die from imprecise jumping and ridiculously accurate enemy projectiles. Baddies are either of the “charge at you blindly”or “stand in one spot rigidly and shoot you” varieties. There are various power-ups to Rad’s gun, such as rapid fire, a focused energy beam, and a grenade launcher, which at least improve your offensive options occasionally, but on the most part you’re just running and shooting.

Each level requires you to find the four parts of a key before you can move on, with some boss fights and puzzles scattered throughout. Thankfully, the levels are pretty good-looking, rich in colour and detailed enough that even if you’re not immediately gripped by the action, you’ll at least be distracted by the visuals. This is a good thing, as there’s little real plot and almost no context for anything you’re doing. Everything simply is, with zero explanation.

Dusty is a sadly wasted counterpart, whose arms allow you to shimmy across certain areas or slam enemies into mulch, but do little else. I can think of at least three things I expected them to do, but they never did, not least allow you to grab onto higher ledges or stilt walk over spikes. You can’t though, and that’s that. Now and then you’ll have to guide Dusty himself through the game’s code, thanks to “lazy developers” (chortle). These are the worst moments (though not by much, but we’ll get to that), as you rarely now what the hell is going on, it’s incredibly hard to control and they off no real challenge or puzzle. They simply exist and that’s that. Enemy projectiles come thick and fast and it’s hard to move Dusty around with precision as you search for a missing platform or break rocks in the code that then break in the game world (again, why can’t Dusty just use his robot arms to break them without going into the code?).

Almost worse are the pogo stick segments, three levels for some reason added to this version that literally see Rad navigating short bonus stages on a pogo stick. They’re annoying and difficult, and when you fail them you get the option to skip them anyway. Again, there is no context for these stages, and so you feel you’re playing them just because the game is telling you to.

Rad Rodgers is one of those games whose attempts to be self-aware fall flat because it’s so, so gamey. It pokes fun at 90s games and is even set in the 90s, but fails to feel at all modern in any way other than the graphics, which look far too modern for the setting, if you get me. Like, if Rad is in a 90s game, shouldn’t it be pixellated? Shouldn’t it feel like you’re playing something retro? Instead you get a largely obnoxious romp with some bottom-drawer writing that really amounts to little more than an excuse to run through a bunch of by-the-numbers stages. It’s not a terrible game, but it’s hard to fully recommend.

Rad Rodgers is too self aware, and falls short on many levels.