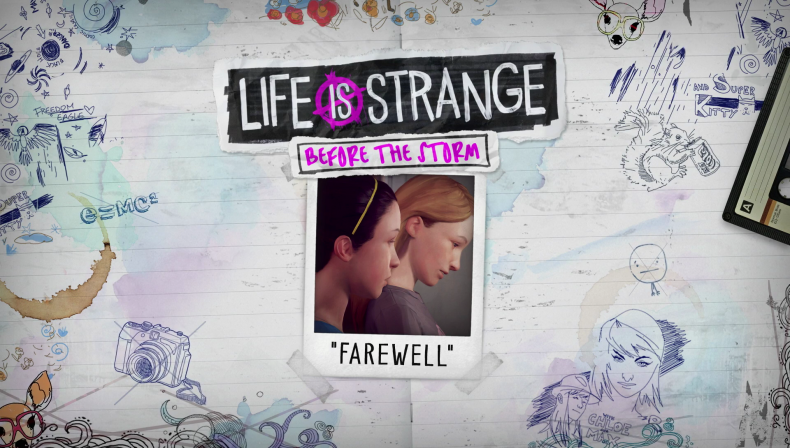 Before the Storm was a welcome return to the world of Arcadia Bay, despite Deck Nine’s struggles to make something of the story they at least gave us an intriguing insight into how Chloe became the person we meet in Life is Strange. Here in the bonus episode Farewell Deck Nine deliver the final piece of Chloe’s character development and it’s one hell of a hammer blow.

The relationship between Chloe and Rachel Amber was always a difficult one to buy, despite never talking to each other Rachel just invites Chloe to bunk school one day and all of a sudden the two are in love. In a matter of days they’re talking about running away together. I’m no stranger to hormonal teenage relationships, but I’m certain that kids aren’t quite so trusting to people they barely know. Here we’re back with Max and Chloe, and knowing that these two have been best friends for years and the fact that we were part of the pair in the original series it makes their chemistry all the more engaging. This episode takes place just before Max moves to Seattle and charters their final fun day together and begins with them blowing up a few dolls with the aid of a firecracker and some lax health and safety protocols. It turns out that Chloe is doing a bit of spring cleaning and you’ve got to help her pack away some important memories during which you come across a map the pair made when they were 8 years old, and – considering that you’re never too old to play pirates – they follow the route to find whatever treasure they buried.

There are no real puzzles to speak of here, the episode generally pushes you along a route so you can experience the day as the kids themselves did, and to be honest it’s all the more stronger for it. As you find yourself ushered from memory to memory, pointing towards things and finding out what they mean to the pair it becomes a touching insight into their childhood and how good friends they were. Even then there was an immense affection between the two and it’s impossible to not get carried along with their enthusiasm and their smiles, even as Max struggles with her emotions with the fact she has it yet told Chloe she’s moving away. If you’ve played a Life is Strange episode you will know that there’s always a point where the game hits you with a gut punch and this one is no different. That’s something that’s really affecting about the happy time the two are spending, finding out about their friendship and when the realisation of what is going down comes to you it hits like a truck. I mean seriously, I was in tears and the event hadn’t even happened, when it went down I was inconsolable. I never used to be like this, but since I became a father I’ve found myself crying at moments of incredible happiness and sadness in movies and games, it’s a sea change in emotions for life events and this game really broke me.

It’s a shame Deck Nine couldn’t elicit this sort of emotion when they were telling their own story about Chloe’s relationship with Rachel, the bond between Max and Chloe doesn’t really belong to them, but they really made this story their own. It’s incredibly short at only 2 hours, but it didn’t need to be longer. The short length allows them to laser focus on the two girls and their friendship and that draws you in more than anything Deck Nine did before. Once the episode was finished I found myself wishing I had never played it just so I could experience it fresh all over again, and I cannot really express where it left me in any way better than that.

A story beautifully told
Max is back!
Crying is not a bad thing

Farewell is upsetting in the best of ways. A wonderful, tearful, round off of Max and Chloe’s story and a fantastic appetiser for season 2.