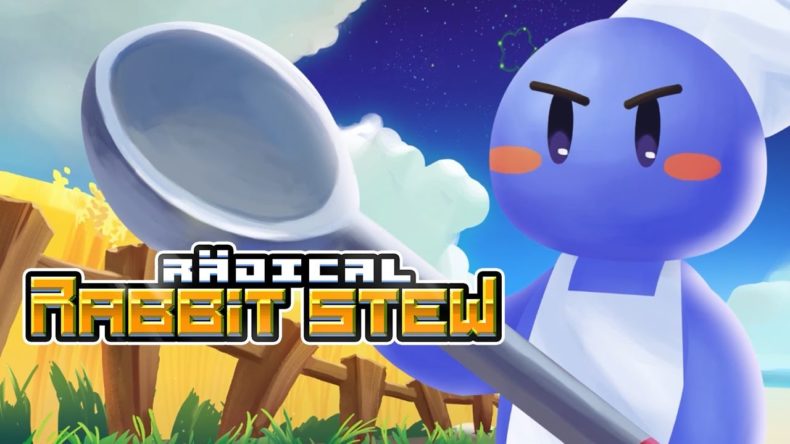 Taking place in a galaxy far away, Radical Rabbit Stew casts you as the cleaner for the Legendary Space Diner run by the most legendary chefs in the galaxy. One day the Queen Rabbit on a nearby planet gets jealous of the food being made and grows tired of the bland veg she’s stuck with. So she sends her minions out to kidnap the chefs. You manage to avoid this, so it’s down to you to rescue everyone.

What ensues is five different areas overrun with bunnies, totalling 62 levels of increasing puzzle difficulty and enemies that try to hinder your progress. Throughout the levels you’ll also come across giant stew pots that give you different spoons, which are your weapons, with different abilities and health power ups.

You’ll also be tested by Radical Rabbit Stew’s bosses that occasionally pop up throughout your journey. There are 6 bosses in total, each with unique mechanics that will test the abilities you pick up on the way. I don’t want to give too much away about the bosses as their  battles are great. The Evil Pugs Bunny is one of my favourites. 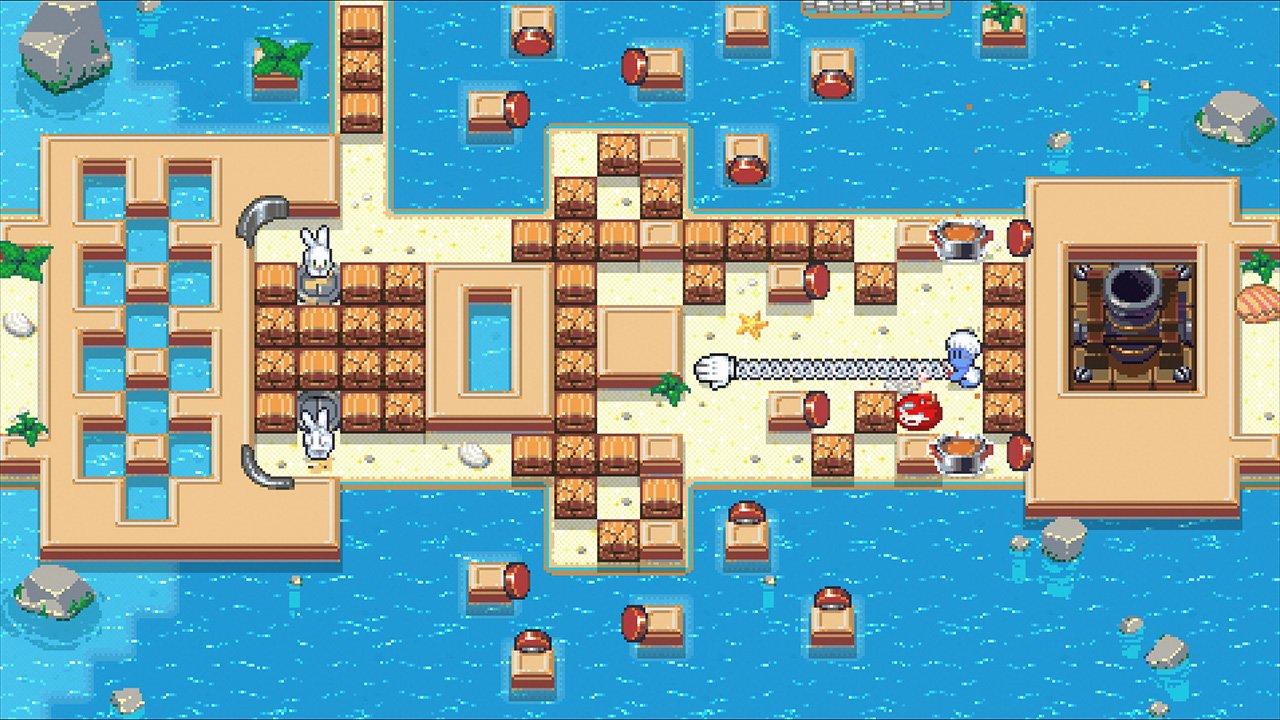 Radical Rabbit Stew is a short game but for this genre that’s fine. It took me a few hours to complete, but that was in part due to trying to get as many collectibles as possible. If you’re not one for collectibles and would rather get through the main story, kicking as many bunnies into stew pots as you can, then you could easily knock an hour off my time. There are a couple of time-themed trophies to encourage this: one for completing it in under two hours and another for finishing it in one. I can see this being a really good game for the speedrunners out there.

Littered through almost all of the levels are Blue Coins. These add a bit of time to the levels and are collected in a few different ways. Most of them are fairly bog standard. Others take a bit of searching as they don’t appear on the screen straight away and will usually be the opposite direction of where your level objective lies. Lastly there are the coins that require some quick thinking and puzzle solving either by using environmental opportunities or timing your moves just right to grab them and get out. They don’t add anything to the characters’ health or abilities but it’s an extra something to work towards and there’s an achievement or trophy for collecting them all. 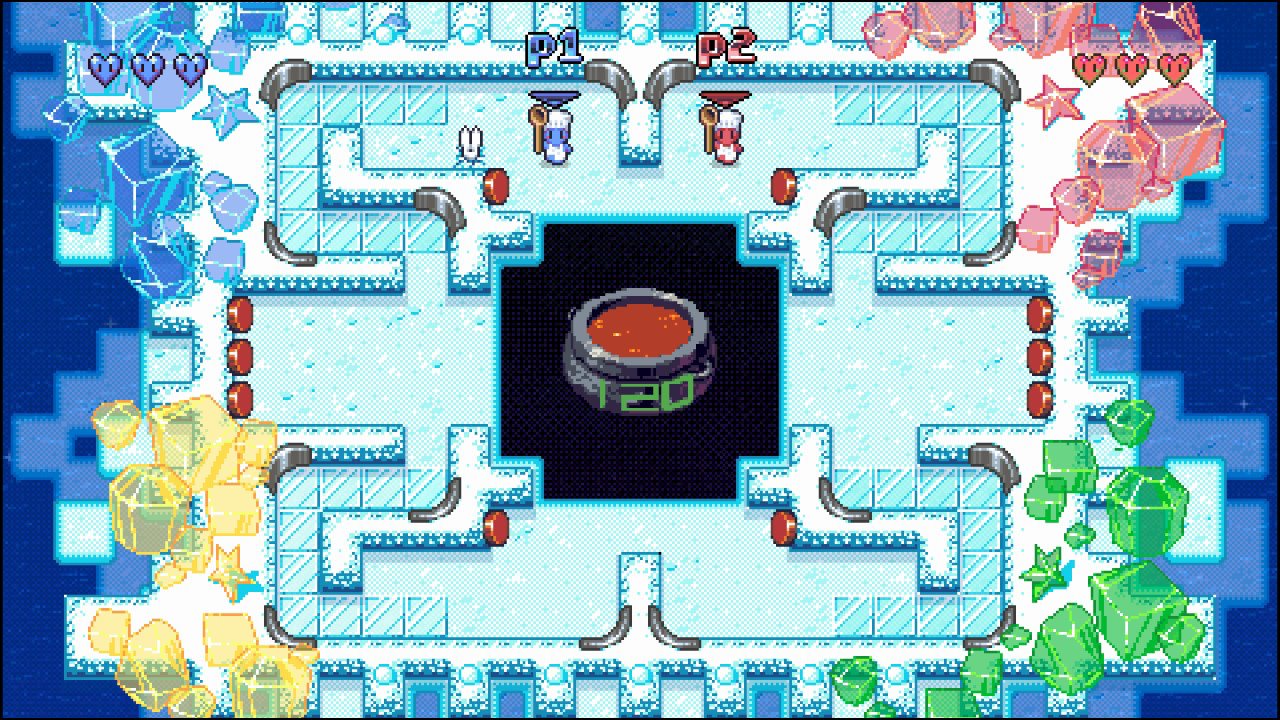 Alongside puzzles, which are the main aspect of each level, you will come across some combative bunnies. You’ll need to use your skills with a chef’s spoon to take them out and send them on their way to bunny heaven. These enemies range from simple bat-looking bunnies that you can take out with one hit, to the more difficult Queen’s Guard bunnies, complete with a suit of armour and a mean sword swing. The combat, even though it is incredibly simple, adds an extra layer of panic and stress to a puzzle when you’re attempting to time a hit to send a bunny into a stew pot but you have two or three (and sometimes more) enemies coming at you from separate directions.

I mentioned previously that Radical Rabbit Stew is a 16-bit game and it delivers the look, feel and sounds of a 16-bit era game perfectly. It’s a beautiful looking game that oozes nostalgia for games from yesteryear. The music is also a beautiful thing, with funky tunes left, right and centre and some brilliant boss themes.

Radical Rabbit Stew also comes with its own local multiplayer where you can face off against up to three others. The aim of the game is to spoon smack the most rabbits into the stew pot within the time limit. The rabbits, like in the main game, will be fighting back and attempting to eat you so it won’t be an easy run. Each multiplayer level is based on the areas within the main game, too. There is also a Level Editor for multiplayer if that’s your kind of thing. It’s extremely easy to use and has floor tiles, items, weapons and most enemies that you’ll find throughout the main story. It’s a good way to get some practice in for the main story specifically, but also the multiplayer, by giving you a chance to try out a bit of everything and spend some time figuring out the ins and outs of certain items.

There were no issues that I came across on my playthroughs of Radical Rabbit Stew. The difficulty progression was good with no ridiculous spikes, the boss fights are a lot of fun and just the right amount of challenge compared to standard enemies.

If you’re looking for a cute 16-bit style game with a bit of a challenge to fill your afternoon then Radical Rabbit Stew is the perfect choice. If you’re also looking for something to test your speedrunning skills this fits the bill for that too and you’ll get a couple of trophies for your efforts.

Radical Rabbit Stew is afun 16-bit puzzler with an amusing story. While it's short, sitting at the 2-3 hour mark to complete, it's a good way to spend an afternoon. Different, cute and quirky.