Raiders of the Broken Planet Review 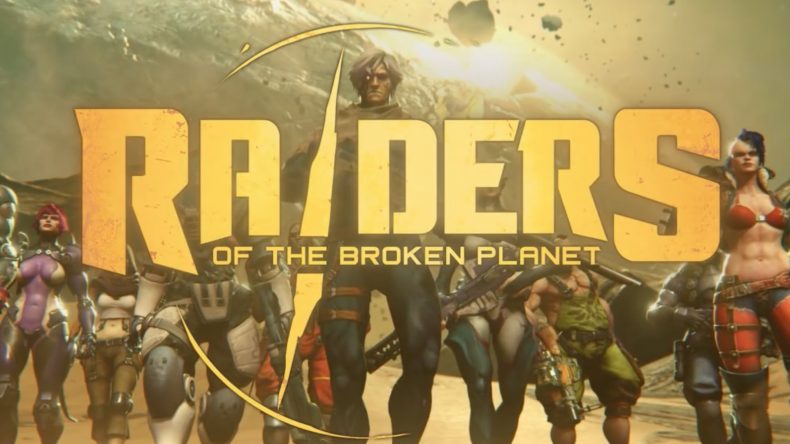 Mercury Steam has been relatively quiet since the release of their Castlevania reboot and its sequel a few years ago, but they finally revealed earlier this year that they had been busy beavering away at a free-to-play 4v1 sci-fi shooter called Raiders of the Broken Planet.

Aside from the wonderfully comic-bookish aesthetic, it’s a hell of a departure from 3rd person hack ‘n’ slash, and a game you really need to play to fully understand. Not because it’s overly complicated, but because it’s hard to fully pin down by genre.

For a start, it’s kind of like a hero shooter. You play as a gun for hire named Harec who has hired a bunch of psychotic mutant-cyborg-alien mercenaries to drive humanity off his planet and away from its precious raw materials. Each character (most of whom you’ll need to unlock through the course of the game or by purchasing the various DLC packs) is very different, boasting unique weapons, skins, upgrades and special attacks. Numero uno is Harec himself, who uses a long-range rifle and can teleport into high corners to ambush his foes, while starter alternate Alicia is more brutal, charging around with a huge shotgun and wall-hanging to avoid ground troops. But it’s also kind of like a squad shooter in the vein of Evolve, where 4 players work together to accomplish a mission while a 5th plays the Antagonist and must kill or otherwise hinder them. Playing the Antagonist, by the way, is not as much fun as it sounds. You’ll be slightly overpowered versus any one player, and you’ll have henchmen to deploy, but if you get cornered by a couple of heroes you’ll be gone pretty quick.

Finally, it’s also a bit like an objective based horde mode. Most missions require you to break into somewhere and rescue or kill someone, or destroy or steal something. Usually you’ll have to do this while getting shot at. A lot. Too much damage will see you bleed out fast if you can’t get into cover (which is contextual and automatic) or away from the fight. There’s a really satisfying brutality to the combat, particularly when you chain together melee attacks. Combos are a matter of timing, as failing to get the button press cock-on will result in the opponent dodging you, which leaves you open for a few seconds.

Initially, the free download is very small. Almost insultingly so, actually, giving you a few characters but only one tutorial mission and one story mission (which you’ll complete in 90 minutes). It’s replayable, of course, but you won’t do that unless you really, really like it. The first content pack is currently around 7 or 8 quid, and features a mini 4-mission campaign and another character. Again, the aesthetic and atmosphere here are both exceptional, the rotten, rusty, rugged future-tech is eye-catching and the playable characters are just the right side of grotesque to keep you on side. The writing is decent, and the constant in-fighting and veiled flirting of the main group of characters is always entertaining. Conversely, Harec’s conviction and dedication to his cause provides levity to all the F-bombs and over-the-top violence. He hates humans, big time, and he wants them off his planet.

My only real complaint beside the brevity of the vanilla package is that the combat, when playing alone, can be a little one-sided. It doesn’t take much to put you down, while some of the enemies can soak up bullets. There are tank-like berserkers who take some serious killing in the first mission, for example. It’s not unfair, but it does feel slightly out of balance for soloists.

How successful Raiders of the Broken Planet will be depends largely on three things: how often the DLC drops, how much it relies on micro-(and not so micro-)transactions in the future, and how compelled the player base is. As it stands, it’s a slick shooter with solid mechanics, an interesting premise and a beautifully ugly world, but whether that’s enough to keep people Raiding remains to be seen.