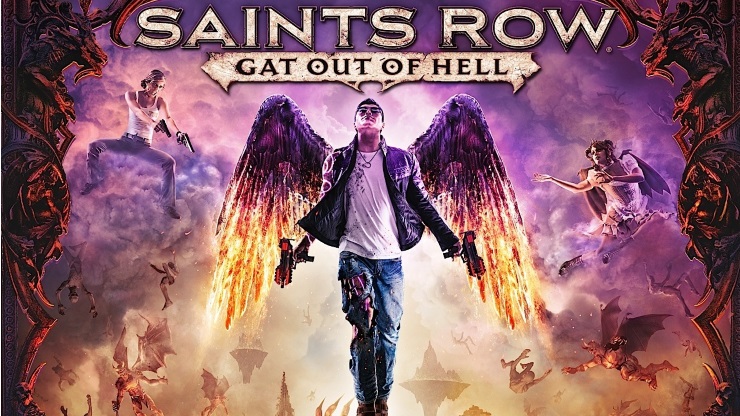 Johnny Gat is Saints Row’s mainstay. The character has appeared in every one of the Saints titles, so we’ve seen him partake in a bit of gangland warfare and he’s also tried to fend off an alien invasion. In an effort to outdo themselves, Volition has taken their series to the depths of hell, as Satan is the latest foil for the 3rd Street Saints. And while the premise continues the trend of taking Saints Row in a more fantastical direction, it feels painfully familiar at times as your homies have you doing the same things over and over and over and over again.

It’s Kinzie Kensington’s birthday party, and the Saints are aboard their spacecraft from Saints IV playing games and having fun, but then someone breaks out the Ouija board. Things get heated almost straight away as the protagonist from SRIV (who also happens to be the President of the United States) is sucked down into hell as Big Red plans to marry off his daughter, Jezebel, to the person who has caused the most destruction on Earth – a match made in Heaven…or Hell, as the case may be. Naturally enough, Gat and Kinzie take umbrage with this and decide to head to the underworld and put an end to Beelzebub’s plan.

One thing the series has been great at it is rewarding those that have stuck with it since day one. Whatever the number instalment, DLC, or downloadable title, references to Stilwater and Steelport’s past are found almost anywhere, even in Hell. Due to the fact that the fun-loving Saints are also murderous lunatics, they run into a few old faces that now reside in the blazing inferno of the condemned. The humour in Gat Out of Hell isn’t as strong as previous efforts – it does have a few good gags that’ll have you chortling, but not enough. Bar one jaw-droppingly brilliant sequence, Gat Out Of Hell won’t be remembered for tickling your funny bone. As this is effectively a spin-off from SRIV, the gameplay is similar. Driving cars is pointless because you can travel at the speed of light, and you can propel yourself into the air with a mighty leap and you have four upgradable, destructive powers to aid you in annihilating your foes. Where Gat out of Hell differs is that now, both playable characters (Kinzie and Gat) can fly. After being bestowed with Satan’s old halo, The Devil’s Playground also becomes yours. On top of your quick feet, you can swoop around the heated environment with ease, making traversal a simple task. Like all the other powers, you can upgrade your wings with soul clusters to use less stamina in-flight, or boost your flapping ability so you get to destinations faster, along with a whole host of other enhancements. Soul clusters are plentiful in the netherworld, with almost one thousand available to collect. As there are an ample amount of these big, glowing blue objects around, it makes it nigh impossible to pass them by on the way to an objective. Everywhere you turn, you can see quite a number of them in close proximity, and collecting them can become addictive. Plus, unlike some collectibles, they actually serve a purpose.

Johnny and Kinzie do need a little help on their quest to bring down the Lord of Darkness, though, and so they must do a few meaningless tasks for some notable folk who now find themselves in Hell, such as Blackbeard and Shakespeare. Gat Out of Hell utterly crumbles, here. Almost all of the missions are just collections of the side quests on offer. You’ll be required to survive waves of enemies in a specific area; fly through a number of checkpoints before the timer runs out; cause as much destruction before the clock reaches zero, and so on. While it makes the challenges feel more important by having them more integrated with the main campaign, it’s also rather lazy. One thing the series has been good at (at least since the third instalment) is coming up with weird and wonderful ways to tell its narrative with weird and wonderful missions, keeping you engrossed in what’s happening. Gat Out Of Hell seems to think you’ll enjoy doing the same thing you were doing a mere five minutes ago, for some reason. It becomes the thing that Volition has successfully avoided for some time: it becomes boring.

It’s somewhat understandable that the mechanics wouldn’t be revolutionised, as this is both a stop-gap between numbered entries, and pretty entrenched in Saints Row IV – it must be mentioned, too, that the shooting is still just about passable. But the addition of flight at least brings something new to the table. The snooze-worthy mission structure will see some dropping their controllers as they drift off, though.

Hell has its ups and its downs. This new environment is something different to traverse, and your newly found wings allow you to glide across the map with ease. But the creative story beats and off-the-wall missions of the series have been replaced with something far less interesting and funny, which is baffling considering the possibilities here. Gat Out Of Hell certainly has its moments, including one five minute scene that had me enthralled and won’t leave my memory for quite some time. But they’re far too rare, and I felt like I was going through the motions for the majority of my time in Satan’s homeland. Saints Row: The Third and Saints Row IV saw Volition taking Pierce, Shawndi, Gat and co out of their comfort zone, becoming more popular than ever. And while the latest chapter in the saga adds some variety to specific areas, it allows others to become stagnant and even regress. Ah well, two out of three ain’t bad.

You can also read our review of Saints Row IV.

Soaring through Hell thanks to the wings on your back adds another element to your A-to-B arsenal, however the repetition on offer stifles flight. A lot.