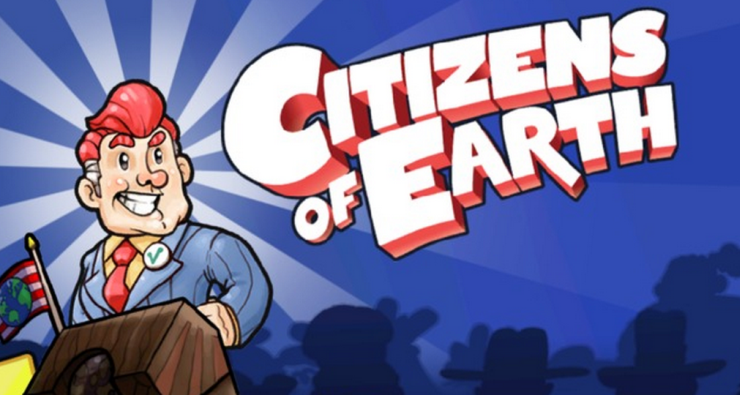 Citizens of Earth is a curious title. A Kickstarter that failed is often an ill omen, but Citizens of Earth was actually picked up by Atlus after its stint in the crowd-sourcing scene. Someone at Atlus clearly saw potential in Eden Industries’ quirky Earthbound-esque JRPG and took on publishing duties hook line and sinker, and the game seems to be largely unaffected by this turn of events, sticking true to its original manuscript. Perhaps it was the artistry on display, perhaps it was the unique combat, or maybe someone at Atlus just really wants a new Earthbound game. Ok, let’s try and get out of this comparison talk. In Citizens of Earth you take on the role of the Vice President. Waking up at home not long after your successful election, your first task is to deal with protestors outside your home, and you do this by enlisting your mother and brother to fight for you. The Vice President is issuing the orders here, he’s the fetching, well-preened face of the party, and the Citizens – from mothers to brothers to bakers to conspiracy theorists to baristas to police women to camp leaders to a homeless guy and everyone in between – are the ones tasked with engaging in fisticuffs. There are lots of party members to find, all with unique abilities and traits, and they’re the ones that do the heavy lifting.

Things start strange and only get more bizarre. The protestors are one thing, goaded on by the grumpy leader of the opposition, but within an hour you’ll have fought a honey bear made of honey, an invading force of coffee bean aliens, and potentially stumbled across a summer camp full of children jacked up on sugar (because they were not only tasked with selling cookies, but with making them too; streamlining at its finest). All of this is solved through takey-turney JRPG combat.

The script is as silly as the above sounds (devices, services and businesses also have very GTA-esque parody names, too) and the voice acting is appealing stuff in a campy cartoon way. What’s more important is that the nattering is greased by some simple but very appealing JRPG mechanics that emphasize experimentation and attack combinations between party members. There’s a cute interplay to landing a defence down with Mum followed by one of your brother’s biggest attacks – a trick the game teaches you early on – and the focus on building action points with weaker moves before spending them on big attacks creates a fun rhythm that avoids the usual shortcomings of mana-based systems. What’s even better is that the game will let you change your squad and restart a battle if you don’t think your current team is up for it, putting a huge emphasis on experimentation and circumventing the likelihood of backing yourself into a corner. Not only are the various systems fun and compelling,Citizens of Earth does everything it can to make itself accessible.

To be honest, where it will truly grab you or lose you is in its comedy and narrative styling, and this is why leaning on the Earthbound comparison can be a bit of a crutch when talking about Citizens of Earth. Where Earthbound is a stylish but absolutely strange Peanuts-style skewering of pleasant, and not so pleasant, Americana culture, Citizens of Earth is more just straight out surrealism and overblown parody. It’s born more from the Ren and Stimpy era, I suppose, though never that “gross-out”. Eathbound and Citizens of Earth feature similar mechanics and they certainly share presentational ideas, with the psychedelic undulating battle backgrounds and focus on battles telling a story over creating air-tight mechanics (yes, enemies have those odd “non attack” moments here, too), but they’re ultimately different beasts. The beasts are a good example actually, where Earthbound has rabid dogs you calm down, Citizens of Earth has deer’s with telephones for antlers… This comparison isn’t intended to dissuade, not at all, because Citizens of Earth is an amusing and well-focused JRPG that’s more than deserving of your time, if you think its themes look amusing. The script is entertaining, the voice acting solid, and there are a lot of side quests and collectibles squeezed in here, and all the content feels worthwhile – Citizens of Earth has very little filler, and still manages to be a rather sizeable game.

This said, when a game plays itself so close to another it’s impossible not to draw comparisons, and I know there will be plenty of people that draw these same lines, and I wouldn’t want to haphazardly recommend Citizens of Earth to someone purely due to its shared elements with a game they may have fond memories of. Judge Citizens of Earth on its own merits, however, and you’ve got the makings of a cult classic. Oh, I guess it might just be the new Earthbound afterall, then…

Citizens of Earth is a quirky JRPG with a sense of humour that loves to make fun of American stereotypes. Destined for cult status.

Circuit Superstars review
Back 4 Blood: How to unlock the other characters
Metroid Dread: How to beat the final boss
Metroid Dread: How to defeat the purple EMMI on Ferenia
Far Cry 6 | How to play co-op
How to transfer your Nintendo Switch data to the new OLED model
How to transfer your Death Stranding save file to Director’s Cut
Social Media
SUBSCRIBE
All content copyright GodisaGeek.com
Fonts by Google Fonts. Icons by Fontello. Full Credits here »
Posting....