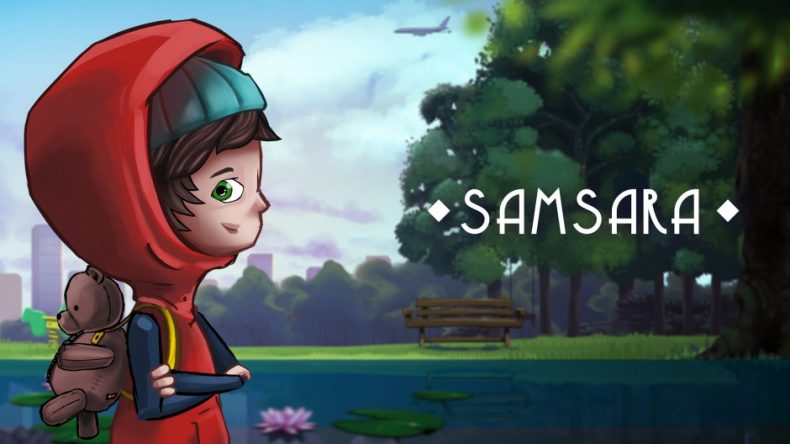 Samsara pitches itself as a mind-bending puzzle game where you solve a vast array of puzzles in a mirrored world. The reality, however, is an overly long puzzle game with some interesting ideas that never really seems to get going or add much variation.

You play as Zee, an adorable little boy who, while playing in a park finds a squirrel that he decides to follow, and by doing so accidentally falls into a portal and is transported to another world. This new world consists of two halves, a normal, every day scene and an upside-down realm that doesn’t always mirror the other half. Each of the seventy or so levels has the same objective – help Zee to navigate the space to exit out of the portal, and hopefully to help him find his way home again. The game takes you to a variety of locations. You start in the park and travel via a suburban area to an amusement park and a beach. Each of the locations serve only as a background to the puzzle though and offer nothing by way of solution other than as a gorgeous hand crafted space to work in. Samsara is a very pretty game with a soft, hand painted feel to the backdrops. The mirrored, or rather upside-down world, echoes the real one but with a shadowy, purple hue. At times it feels like the world underneath is the reflection of the world above, as if mirrored in a pool of water, but it never quite feels right. There is a sense of unease about the underneath world that unfortunately isn’t expanded on.

There isn’t much by way of a story to Zee, or rather nothing is made explicit. It’s clear that Zee has fallen through to an alternate reality, and in that other dimension is another boy who resembles a shadowy version of Zee, or perhaps he is Zee, but he has been fractured in some way. As you progress further into the game you encounter levels where as well as guiding Zee to the portal you must also help his shadowy counterpart to his own portal as well. Each boy has a different, specific effect on the environment that in later levels you need to exploit so that their movements assist the other one to escape. It isn’t enough in these levels that our Zee escapes, his shadow must do also. To solve puzzles you are given very limited tools that comprise of a small number of shapes that have different properties as you progress through. In the beginning you have objects that are simply placed in the world either in the top-side or upside-down worlds that create platforms and steps for the boys to cross via. If you place an object in the upside-down, it will mirror in the top-side world, conversely, placing that same object in the real world will not reflect in the shadowy world. Solving puzzles then, becomes a mixture of experimenting by placing and rotating objects in each half of the world to find the best fit. Later levels follow the same principles, however, the objects take on different properties, for example much of the late game puzzles use objects seemingly forged from a substance like gold that when placed in the underside space will shift up in the over-world as if repulsed by a force like that of two magnets opposing each other.

There are some really interesting ideas at work in Samsara. The different properties that each shape has as you move through the game, combined with the effect each boy has on the environment make for some reasonably challenging puzzles as you progress, but nothing was particularly difficult. Of the seventy or so puzzles that Samsara throws at you, there were only one or two that had me momentarily stumped and even then it was only for ten minutes or so. I am not saying that I wanted to be stumped for hours, but I was hoping for a little more consistent challenge, and I think therein lies the problem. For all of the nice ideas that Samsara presents to you, it never really evolves them as you progress. There are some puzzles that add complexity by placing teleportals that transfer Zee and his shadow to other places in the puzzle, but you are still only placing the objects in the world to create ramps and sometimes barriers to change the boy’s direction, you never have to think too many steps ahead to solve it. This is perhaps in part with the very generous system that retains all your object placements should you fail – each puzzle becomes a process of trial and error until the solution presents itself. Although Samsara isn’t a huge game, the sheer amount of puzzles you solve makes it feel like it slightly overstays its welcome, something I think is amplified a little by the lack of variety. Once you have completed all seventy-seven levels you can go back through them all, but this time inverting them. The solutions are more or less the same, of course, however, you make much more use of the reflection technique that the under-world offers you.

For all of my criticisms of Samsara, I did enjoy what I played. The world was a nice space to inhabit, and I liked the duality of the two Zee’s and the challenges to get both of them through their respective portals. I did feel a little fatigued towards the end as the puzzles don’t really vary that much other than adding in a little gravity bending properties, and a teleport here and there. Samsara is a pleasant puzzle game, but it ultimately fails to provide any moment of real achievement at having solved something particularly mind-bending.

Samsara is a pleasant puzzle game that doesn't quite challenge enough to give you the unique satisfaction of the “ah-ha” moment when you solve something particularly difficult.