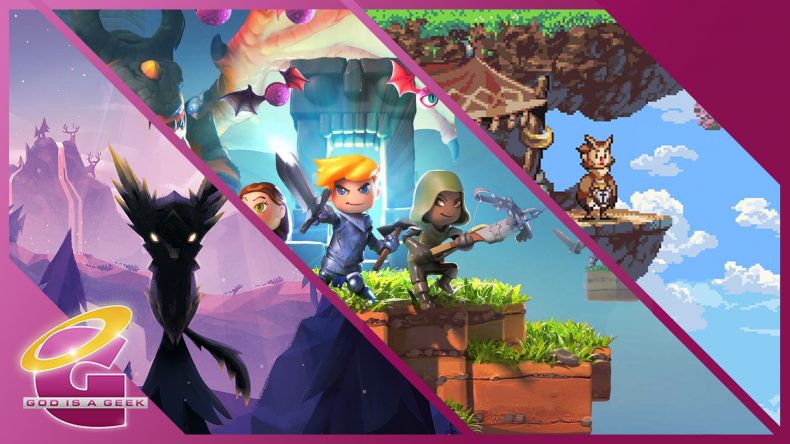 It’s time for round 5 of the Re:Port series that looks at Nintendo Switch ports of games that originally were on other platforms or just how the Switch version of a specific game is. I might have to increase the number of games covered in each Re:Port because Switch releases don’t seem to be slowing down at all. The last week or so has been full of some great releases including new games and ports. We have Fe (Nicola Ardron), Owlboy, Mercenaries Saga Chronicles, ATOMIK: RunGunJumpGun, Portal Knights (all from Mikhail Madnani). Grab a chilled beverage, your Switch, and have a read then. I had my eye on Owlboy around the time it released on PC for a variety of reasons. D-Pad Studio’s trailers caught my eye with the stunning sprite work and I had also heard a lot about the story. It eventually released on macOS but I never really got around to playing it until much later. When I did start playing it, a Switch port was announced and as with most things, I decided to wait on the portable version. In a lot of ways Owlboy reminds me of the 90s. I say this as a compliment because the story is fantastic and the visuals and music are both absolutely brilliant. The metroidvania platformer is worth experiencing.

The Switch port of Owlboy is mostly perfect. The controls translate well and it looks drop dead gorgeous both docked and in handheld mode. I’m impressed that the team managed getting it running at 60fps in both modes as well. The performance is the only area where there are minor issues. In my time with this port, I noticed instances of stutter. There are some minor bugs as well but overall I’ve come away very impressed with D-Pad Studio’s Switch release. In a lot of ways, I’m glad I waited to play this version. With the Vita slowly moving behind for many indie developers, it is good to see the Switch have almost no trouble taking over as the go to for portable indie games with almost no compromises. Owlboy was already worth playing and now even more people can enjoy it. They also fixed the icon that was seemingly a mistake prior to release for the people who pre-ordered and preloaded it. Given the Switch has a nice capacitive touch screen, there have been many mobile games making the jump to Nintendo’s new handheld. ATOMIK: RunGunJumpGun originally released on PC and mobile platforms is a hard as nails platformer with simple controls and a very trippy aesthetic. There is even a Hotline Miami vibe in the narrative and some of the music. You have 2 inputs only here with one shooting downwards while projecting you up and the other shooting forward. Your aim is to collect Atomiks as a scavenger and the narrative moves to the backseat as you get fully invested into trying to collect all Atomiks in each level.

I played this on iPad before the Switch and have had a lot of fun with both versions. The Switch port looks and runs great in both handheld and docked mode. You can even map both inputs to anything on the controller. I am disappointed that they didn’t include the touch mode since this already exists on mobile platforms. If you’ve ever wanted Jetpack Joyride blended with Hotline Miami, this is the game for you. I’m gonna have this installed on my Switch for a long time. It is super to just jump (no pun intended) into this for a bit during breaks. The Switch is already home to various building games with the likes of Minecraft, Dragon Quest Builders, and even LEGO Worlds on the platform. Each of those takes the core builder game and adds something new to the formula. Minecraft of course is the original that is probably one game almost everyone I know with a Switch owns. Portal Knights on the PS4 was an interesting release when I played it around launch. It blends quite a few elements together and is overall a more combat focussed experience. In fact the sandbox overall feels akin to Terraria as well in some aspects with the boss fights and co-op experience.

Portal Knights has already seen a release across multiple platforms and the Switch release is great but there are a few technical issues. The draw distance is almost too small. It reminds me of No Man’s Sky on a base PS4 at launch which is really bad. Given how dense the grass gets just in the opening tutorial, it is pretty sad seeing an area close by look flat from a distance but suddenly have grass appear when you get closer. I like the touch implementation though. You can use touch to attack or use items and manage your inventory. On the performance side, there were a few slowdowns but nothing to really detract from the overall experience which was a lot of fun. Portal Knights is a worthy addition to the building game library on the Switch next to Dragon Quest Builders which is still my favourite of the lot.

A collection of games originally released on iOS, Android, and Nintendo 3DS. Square Enix seems uninterested in doing anything with the Tactics brand they have under the Final Fantasy IP at this stage. We’ve seen loads of developers try and replicate the magic of Tactics but few have gotten close. Mercenaries Saga launched on phones a while back and was a nice looking Final Fantasy Tactics like experience that felt a bit too pedestrian for its own good. The developers went on to make two sequels for this that saw mobile and Nintendo 3DS releases. Now, the full trilogy including the previously mobile exclusive release are available together in a single package on the Switch in the form of Mercenaries Saga Chronicles. Rideon Japan’s set of three games is worth experiencing if you’ve been craving an isometric grid based tactics release but can stomache a throwaway plot for the gameplay.

The Switch release for this collection is good content wise and visually but it is very disappointing when it comes to controls. I’m a big fan of Final Fantasy Tactics on iOS with its brilliant touch controls. Every grid based strategy game should support touch controls when the hardware supports it. Mercenaries Saga Chronicles not only doesn’t support touch for gameplay but it doesn’t even support touch for menus and navigation. Visually, the sprite work and environments look very nice but as expected, there’s some reuse. As a package and given the price point, this is a very good value package for SRPG fans with more than 80 story chapters and more free battles. Fe, pronounced “Fae” is a puzzle platformer where you communicate with the animals of the forest to assist you in solving puzzles. It is at times beautiful and a little eerie with the forest stretching out before you and mysterious bipedal creatures that if they see you will imprison you and re-set your progress.

On Switch, Fe plays very well in both hand-held and docked mode, although visually it looks marginally better on the smaller screen. The blown up visuals in docked mode just don’t look quite as nice for some reason, perhaps in part because of the polygonal nature of the art style. The controls feel a little flighty with a camera that moves around a lot, and on the larger screen I felt a little motion sick at the speed with which the camera can shift about, something that I didn’t experience in hand-held mode.

The controls are fairly straight-forward with the additional experience of motion control in docked mode. To communicate with the other animals in the forest you must sing to them, but you have to find and maintain the correct pitch to do so. Utilising the motion controls, you flick your right wrist up and down until you find the correct pitch. It feels a little gimmicky and I will admit to preferring to just using the toggle button instead (something that you can turn on and off in the settings menu).

I enjoyed Fe, but it didn’t blow me away. Visually it holds up far more in the hand-held mode and any issues I experienced with a slight motion sickness in docked mode melted away on the smaller screen. Fe is a pleasant experience, best enjoyed curled up on the sofa gently singing to the creatures of the forest.