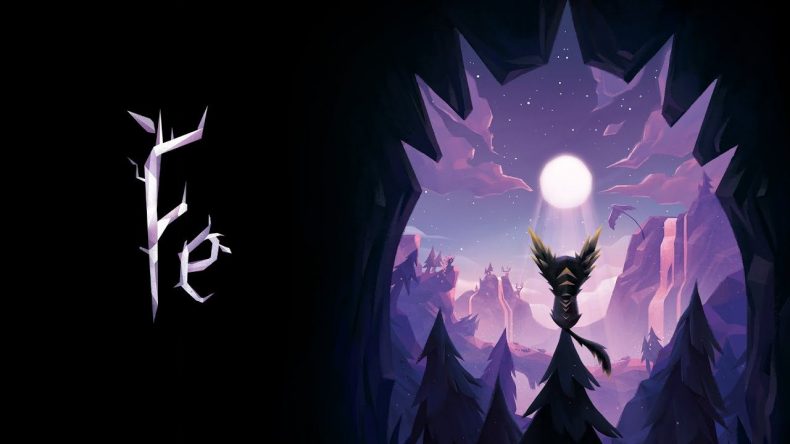 Fe’s been a long time coming, but it was worth the wait – sort of. It is in no way perfect, and there are some problems I had with certain aspects of it, but I’ve not seen a world quite so pretty in some time. Taking inspiration from games such as Journey, you play as Fe, an animal trying to uncover the mysteries of the forest and stop a force known as the Silent Ones from destroying the serenity and the population of animals living within.

One of the most liberating things about Fe is the lack of a HUD. You are given the beauty of its art style without anything to get it the way. There is very little to learn, and there is no combat, so there are no health or stamina bars. You don’t collect anything you use, other than certain seeds or fruit collected from plants, and some things to find for the completionists. It’s essentially a puzzle exploration game, and the freedom you have is wonderful. For the first half or so, you find the way to the next puzzle relatively easily, but if you ever get stuck, you soon unlock a power to call upon a guiding bird which’ll fly in the direction you need to go in.

There’s no dialogue in Fe, either. The main way of communication is singing and you do this by holding in the right trigger. Certain animals and plants require softer songs, so you need to gently press the trigger, whereas others will sing louder, so holding in the trigger will make you singer a gaudier song. As you progress through Fe, you’ll encounter certain animals that act as that areas main puzzle – the adults. For example, one of the game’s finest puzzles is trying to untie a giant stag, then fly around it by climbing the trees attached to its body. This stag stands at around 100 to 150 times your size, and the scale of it is quite…well, staggering. Once you complete these sections, you’ll learn to speak a new language, and each one helps you connect with the forest in new ways. One allows you to open up pink flowers that acts as trampolines, and another will make orange flowers fire a shot of air as you fly over them, levitating you higher into the sky. You can go back into the world to use these powers, as there’ll be a time when you didn’t have them but could’ve used them.

You’ll also learn new abilities as you play, with the most useful being gliding. One of the main modes of getting around is climbing trees. Not only does it get you higher, but once you can glide, you’ll be able to get around the forest faster and avoid the dreaded threat of the Silent Ones. For a while I found it tricky to climb the trees, or at least get to the top without jumping off. You press a button repeatedly to climb the tree, but press it one time too often and you’ll fly off too soon, which can be frustrating.

Speaking of the Silent Ones, you’ll encounter them throughout the forest, and when they see you, they’ll capture you. It can be quite upsetting when they capture an animal you’ve interacted with, just because they feel like a metaphor for climate change. Nature is under threat, and it feels like there’s little we can do to stop it. Thankfully, you can stop them from capturing creatures at certain points by throwing green seeds at the black webs they fire around the animals. There are also points in Fe where you can find little blue orbs that allow you to see inside the Silent Ones. You play out a minute or two from their viewpoint, and it’s incredibly creepy. When Fe was over, and I’d seen the beauty within its forests, I wasn’t sure how I felt. It’s a gorgeous looking game, but there’s little guidance unless you keep calling for a bird to show you the way, and some of the puzzles go on for too long once you get past a certain point. I enjoyed it, don’t get me wrong, but I often felt distracted by the obtuse nature of some of these bits and it started to drag a bit towards the end.

Unfortunately, I encountered two bugs during my playthrough that stopped me progressing. One of them had me trying to round up some boars, but the last one wouldn’t follow me, even though I’d done everything I was supposed to. The second one required somebody to open a door for me, but he wasn’t there. When this happened, I had to exit out of the game, then go back in to fix them. It’s something you shouldn’t have to do, and it left me a little disappointed.

That’s not to say that Fe isn’t good. It’s a stunning game, both visually and musically. The score is moving, and interactive, making Fe a wonderful experience throughout, despite some of its flaws.

Fe is very pretty, and the music is equally stunning. It's a wonderful little game let down by some drawn out puzzles and some tricky climbing mechanics.