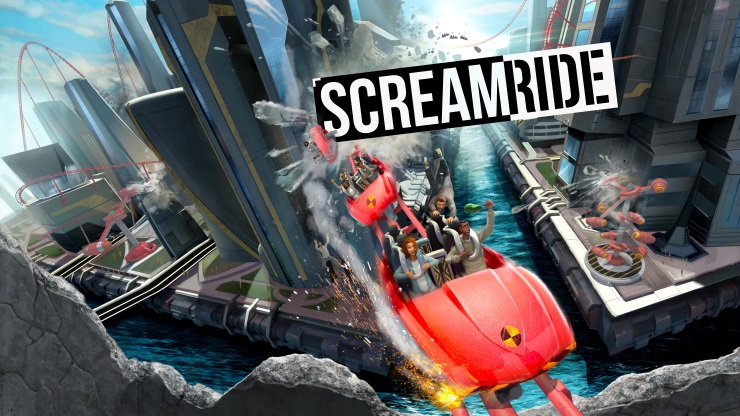 As anyone who has played the demo knows, ScreamRide is bonkers. It’s unsurprisingly hard to categorise a game that’s part rollercoaster sim, part physics game, and part level designer – but that’s what we’re dealing with here. The insane premise transports us to the near future, where the best fun to be had is in scaring yourself half to death in a breakneck rollercoaster ride, or by sitting in a spherical cabin waiting to be pelted directly into a building. The theory is that the limit of human potential lies between terror and fun, or some such nonsense. It doesn’t matter anyway: you’re hurling people at buildings, for goodness sake.

You’re an employee of ScreamRide, and your job is to make people, well, scream. Your sole purpose is to thrill and terrify your test pilots, using a variety of options based on three career paths. As a ScreamRider, your objective is to earn as many points through screams as you can while riding a pre-made coaster. Collecting and using boosts, pulling wheelies, surviving jumps and going as fast as you can are the only things you need worry about in this mode. It’s the most bare-bones of the three careers, and despite the inherent thrill of riding a rollercoaster as fast as you can, there’s little real variety from one track to the next.

Different criteria add up to your points bonuses, such as boosting a certain distance or avoiding a derailment. It becomes more complex when the tracks start adding multiple jumps, loop de loops and twisted sections to make your riders topple clean out. A derailment will often see huge sections of the surrounding level satisfyingly torn down, and the end of every event is an amusing cutscene as your hapless testers are rescued from various situations. Secondly, there’s Demolition Expert, which sees you take part in an Angry Birds-style game wherein you launch cabins full of test pilots at distant buildings and attempt to knock them down in as few hits and as much noise as possible. The fact that people are wandering around under them at the time adds to ScreamRide’s macabre, sadistic undertone. This mode is possibly the most fun, and variety comes in the form of different cabins, some with greater aftertouch, some with the ability to detonate. Targets, rings, glass windows, explosives and re-launchers that will catch your cabin and fire it again give you multiple things to aim at, and watching an entire skyscraper come down in fiery explosions and rains of steel and mortar is hard to beat.

Lastly, Engineer mode is a cross between the first mode and the Sandbox. In this mode the objective is to complete an unfinished track and then test it with an automated car, racking up points without smashing anyone against a brick wall at high velocity. It’s perhaps the least engaging of the three careers, but at least offers a different set of challenges. ScreamRide looks pretty. The cartoony, angular graphics are bright and colourful, and the backdrops are lovely to look at. The sense of speed is conveyed well, and you can’t fault the scale of the environments. Ultimately, though, it’s a fairly shallow, decidedly silly experience. Also, while the physics are great when knocking down buildings, they’re pretty poor when rolling through people, who slide away, fully upright, like fixed bowling pins. If you mashed them into pink mulch it would ruin the ambience, I admit, but it would at least be more realistic and, dare I say, morbidly amusing.

Each level of each career has a rating system to track your progress, and anything you build can be shared online. To be fair, there’s plenty already included here. The game spans six series of tests, each in a different location and containing several events in each career, so getting through them by upgrading your security clearance will take a while. The Sandbox, though, is the real bread and butter of the experience, and where it will likely find its legs. In this mode you start with a blank, empty world and build an entire track from scratch using pieces unlocked through the game. It’s neither easy nor accessible, and getting your head around it can be daunting. Factor in things like breakable glass pass-throughs, loop-de-loops and jumps and it becomes even more difficult to comprehend. Once you begin to understand, through baby steps, trial and error, and constant testing, it becomes much more enjoyable, and I look forward to seeing what the community comes up with down the line.

But it’s different from anything else available on Xbox One, and originality always counts for something. As an alternative to the usual fare it’s a refreshing diversion, and one that sets itself apart by being slightly sadistic yet harmless fun. More variety in the actual gameplay (and maybe a trick system of some kind) might have made the experience more enjoyable and rounded, but as it stands it’s a decent enough exercise in creative mayhem.

No real purpose to what you're doing.
Physics engine does nothing with human characters.
Hard to get your head around building tracks.

A completely insane concept, ScreamRide is a decent coaster sim combined with a brilliant physics game and a complex yet engaging level designer.