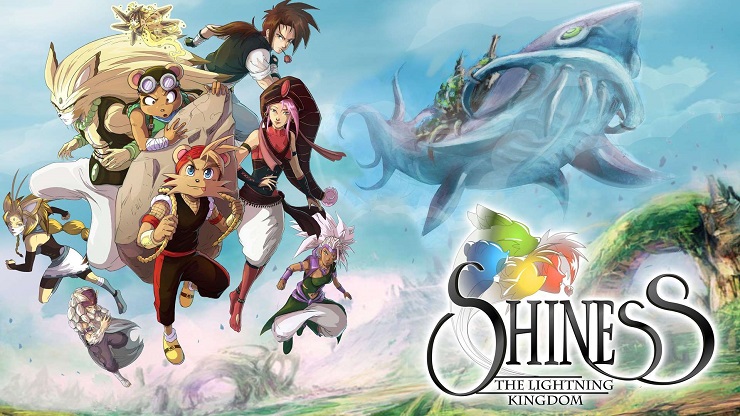 As Yooka-Laylee proved recently, charming and nostalgic throwbacks to simpler, ‘better’ times don’t necessarily make for a great game. Shiness: The Lightning Kingdom (pronounced shy-ness, fyi) doesn’t suffer in quite the same fashion as Playtonic Games’ recent release, in the sense that there’s enough in this 15-20 hour action RPG to hold your interest, despite some rough edges. It’s decidedly bright, colourful and brings to mind a time in which Sony were throwing all manner of cutesy, diminutive heroes into their games, but there’s enough substance in what Shiness tries to do that it avoids accusations of being a pointless cash-in on a bygone era.

Based on a manga drawn by developer Enigami’s creative director, Samir Rebib, Shiness’ world and story pique the interest, even if they both stop well short of being engrossing. After some initial scene-setting with a heavy emphasis on elemental spirits, your short, stocky heroes Chado and Poky crash-land on a strange, vibrant planet with cat-like folk who don’t seem especially happy to have you here. When they want to, Shiness’ three main races (humans, chipmunk-like Waki and the tall feline/human crossover Shelk) seem to co-exist fairly peacefully, but the threat of Dark Shi forces Chado and Poky to work with this land’s natives and put a stop to an unseen force that promises to do something…bad. If that sounds vague, it’s because Shiness has something of an issue crafting a tale that’s truly worth your undivided attention. Its desire to drop you into the thick of it as opposed to throwing a load of its mythology onto the screen is welcome, but it’s arguably far more interesting when it doesn’t take itself seriously. It might be a struggle to care too deeply about what Chado’s up to, but on the plus side conversational choices are frequent, with pleasantly modern meme-like illustrations denoting which particular emotion it is that you’re tapping into. Nowhere is this more fun than in one particularly memorable scene which allows you to trash-talk a boss before his cackling subjects, which works even though your knowledge of what your choices of insult is exactly zero.

The emphasis on exploration is set from the off, and it’s welcome, letting you loose on what Shiness has to offer quickly. It introduces platforming and environment interaction to solve puzzles, with your abilities changing depending on who you’re controlling. It might all boil down to opening doors in some shape or form, but for example, Chado can throw menhirs at pressure switches or knock down bridges for you to walk over, Poky can use his Shi Wrench to link beams of power between corresponding holders to make new passages, and Kayenne uses telekinesis to move blocks or stones or other specific objects into appropriate positions. It’s never too difficult to ascertain which character is appropriate for each situation, and finding your path is always clear enough. There’s an emphasis on keeping things accessible when it comes to exploration and progressing quests, and that’s welcome. Thing is, the same can’t always be said for the combat. Fighting the inhabitants of this world is the real meat of Shiness, and it’s something of a mixed bag. Even after several hours, the timings required dodging and parrying still feel unnecessarily precise, which makes it hard to get into a decent rhythm with the game’s more challenging foes. Firing up combos of kicks and punches isn’t necessarily difficult; it’s simply that due to the pace of combat, flow can be easily broken and it doesn’t take long before you’re eating repetitive knuckle sandwiches. Healing in combat is a sinch, at least, with both vendors and animals able to provide you with fruit that will boost your health bar back up in a pinch. If you can gain a quick and rare moment of quiet during battle, then you can boost your Shi bar and fire special attacks at your foes, but given how fast-paced your attackers frequently are, such decisions are often punished. Still, fighting one-on-one feels quite focussed and makes for a nice change of pace, and you have the ability to switch between characters at the press of a button. Of course, if you run into several foes, then you will have to take each one down one at a time before you can progress, and should your party fall, then expect to fall back to your most recent manual save. Shiru, the small spirits that allow you to log progress around the world are, at least, quite frequent, and battles are often so quick that repeating them makes little difference.

Items and equipment also play their part, with Disciplines scattered around the world and available from vendors to boost your attacks and standard head, leg arm and body armour all raising your stats. This all makes for a game that feels fun to play, even if it isn’t a blast. You can still have a perfectly enjoyable time with Shiness, even if you care little for what’s happening in terms of its narrative or its characters. The brightness and colour of its visuals aren’t necessarily matched by its world-building or story, making it feel a little half-baked. It feels a little rough around the edges at times, too. For instance, along with a few examples of decidedly blocky graphics in some parts that could’ve used more attention, English voice actors employed for cutscenes, but any short dialogue is spoken in another language (presumably French, given Enigami‘s location); there are several instances where the dialogue spoken isn’t the same as what you’re reading on screen and one particularly memorable glitch saw a character fall through a lift and down the shaft that I’d just travelled up when I reached the top and lose all their health. My crime? Moving slightly.

Still, Shiness has enough charm, visual appeal and energy to get by. It also doesn’t overstay its welcome, offering just enough to do in terms of side quests, quick combat challenges and a main story without collapsing under its own weight. It’s tough to sell it as anything over than a fun distraction, but if you’re in the market for a cartoony, vibrant and accessible action RPG, then Shiness will certainly satisfy your appetite.

Shiness doesn’t try to reinvent the wheel, and its style and execution are designed to evoke memories of your gaming past. Come for the pretty world, stay for the fast, if slightly messy combat.