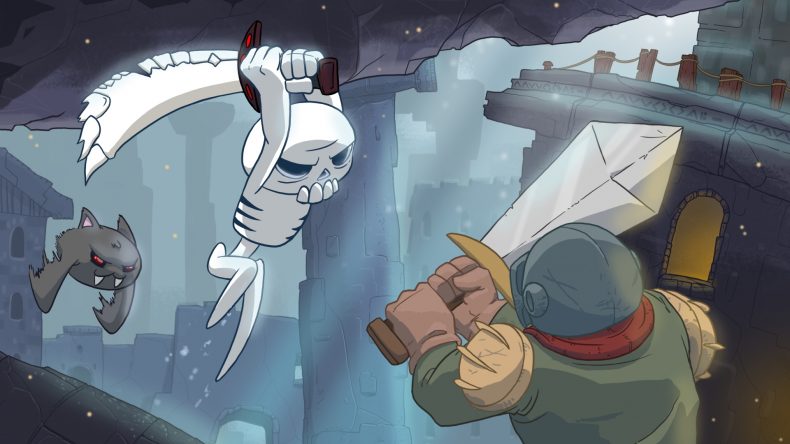 Skelattack is barbaric, hellacious, and soul destroying. It pushes your reflexes to the limit and forces you to make seemingly impossible jumps and platforming slaloms that it appears you have no hope of making. An amalgamation of Cuphead, Super Meat Boy, and The Binding of Isaac is what you get with Skelattack, and you better be ready to control your anger and remain level-headed through extreme adversity.

Have I sold it to you yet? No? You’re not up for insane amounts of action, twitch-heavy controls, and plenty of challenges? I don’t blame you, but the thing is, Skelattack is marvellous. Despite the difficulty, David Stanley’s game is a perfect mix of what makes platforming addictive. Yes, it’s tough. Yes, you’re going to get frustrated – however, you’re always given the tools to make sure you can overcome the obstacles deep within the belly of the dungeon.

You play as Skully, an enchanted skeleton and lovable fool who is sent to stop intruders from uncovering the mysteries of the dungeon. Alongside you to fight against the evil humans is Imber, a witty bat and Skully’s best friend. Together, you must leave the sewers to protect the secrets your people have kept for centuries. Skelattack is so pretty. There’re so many colourful characters you’ll meet along the way, inspired by the likes of Tim Burton and Adventure Time, with levels that play out like they’re directly from a macabre cartoon. Skelattack is lighthearted, funny, and full of life. Much like Cuphead, it has its own unique art style, and it was the first thing I really fell in love with. Even after hours of failing and making countless mistakes to get past a certain section, you never get tired of how good the artwork is.

As you make your way through the dungeons, death is round every corner. Danger comes in all shapes and sizes. Assassins, crocodiles, bugs, and sword-wielding warriors all want you dead. Multiple death traps like thorny plants, arrow-shooting contraptions, spinning blades, fireballs, and jagged glass hinder your progress. It is up to you to overcome every obstacle, and at first it’s so overwhelming you don’t think you’ll ever survive. What Skelattack does so well is gradually equip you with new tools and mechanics. You start off with a blade, but over time you can improve its impact by finding materials and taking them to a blacksmith to upgrade it. You’ll improve your jumping, the moves you can perform with your blade, unlock boomerangs, magic, and health upgrades, and with each one the levels become that little bit easier. One of the trickiest things to master is the jumping between walls, as you jump with one button, but use the left analogue stick to move between them. I’ve become so used to pressing a jump button to traverse upwards, but the stick is your main source of getting where you need to go.

Every enemy has a different attack pattern, and they also have the ability to parry you. Skully doesn’t always manage to connect, but when he does there’s also the chance for a critical hit, adding an element of strategy to how you fight. Imber is a vital companion to you. She can help you fly over tricky sections, and at times flies off on her own to make it through areas that Skully can’t. One false move by either Skully or Imber can mean instant death, but thanks to the frequent checkpoints and quick load times, you are always thrust right back into the action.

The environments are amazing, too. Whilst jumping and climbing, there’re also things that will help you get from A to B. In the Greenery, you can jump on mushrooms to help you reach higher levels, and shoots of water thrust you up into the air, however, they can also lead to endangering yourself. Every step you take needs to be cautious. You’re only ever punished for your own mistakes. The controls are fluid, and Skelattack wants you to succeed. By observing every aspect of the level carefully you’ll progress, so when you die needlessly, it’s important not to let your frustrations get to you. There’s always help when you need it. One of the early upgrades you get it the ability to have Imber supply you with additional health, but once this runs out you’ll need to find gelatinous cubes known as Jellies. They’re so cute, and they also refill Imber’s health supply for you. There’s also a deep web of tunnels that help you get around the entire world, and you can also use these to go back to the sewer and visit your home town. Here you can read the pages you find within the dungeon, visit the black smith, chill out in the bar, and spend your hard-earned crystals to buy upgrades for Skully and Imber. My biggest concern was how one wrong move can lose you all of your crystals. If you keep dying, you’ll find yourself without any crystals, and this can be very frustrating, especially if you’ve been really careful to keep hold of them.

Skelattack is an indie platformer filled with charm, thrusting you into a beautifully designed world. It’s punishing and infuriating, yet it always gives you the tools to plot your success. Boss fights become harder the further you get, enemies are relentless, but it’s such a delight to play that the pain of dying is outweighed by the sheer thrill of progression.

Jumping is tricky to get used to
Very hard

Skelattack is an indie platformer filled with charm, thrusting you into a beautifully designed world. It's punishing and frustrating, yet it always gives you the tools to plot your success.