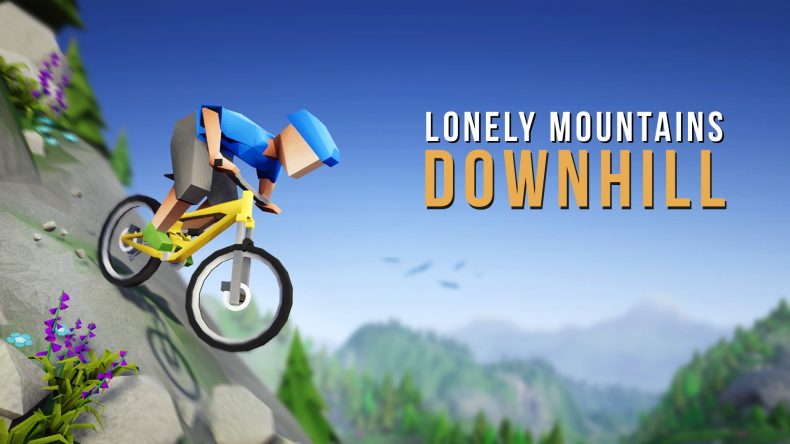 The last time I looked at a game involving a bicycle was the staggeringly bad, po-faced 2013 Tour De France sim, which married simplistic button holding tedium to the prospect of watching cyclist arses bob up and down. Thankfully my second bike outing discards the serious portrayal of endurance cycling, instead offering a wonderfully stylised depiction of downhill mountain-biking. It’s the Switch conversion of one of the best indie games of recent times, and is a corker.

Despite sounding like it should be a brand of hipster hiking attire, Lonely Mountains: Downhill plays out like an isometric, downhill spin on Micro Machines, or classic Neo Geo rally arcadester Drift Out. Its like a less bonkers Trials. It’s not trying to be an accurate depiction of a sport; it is essentially a taut racer, that just so happens to also give a fair impression of steering a bike that is careering down a hill. The fundamental aim is simple – get down to the bottom of each course, in the shortest time. The game helpfully lets you have a completely unembellished stab at each track before throwing a series of goals and conditions at you. These may be based around achieving completion in a certain amount of time, getting to the end without hitting an obstacle or crashing, which you will do with alarming regularity to begin with. With practice and repetition you will improve – learning to shave seconds off your personal best by timing your turns and use of the boost ability to make your polygonal rider floor it briefly, seeking out the shortcuts which often come with a degree of risk, but rich rewards when it comes to getting your ass down to the finish line as quickly as possible.

Progression in Lonely Mountains downhill is made by beating the challenges you are set in order to unlock new mountains and even new bikes. There are four geographically diverse areas to explore, with a total of sixteen courses. The controls are taut, and gameplay compulsive and rewarding of exploration to discover all of the secrets each course harbours – there are many – despite no stage really going over the 3 minute mark. Megagon have employed a bold, beautiful art style that manages to place you in a variety of locales – from rich, verdant forests to the glowing-hot Monument Valley style terrain. It looks lovely, but being the Switch, there are some noticeable performance differences from the other versions available. You will experience some slowdown, and some jagged edges, but it would take a heart of stone to not enjoy the game because of these relatively minuscule flaws.

One area that isn’t compromised is the superior sound design, which eschews the use of music and bombast and instead generates oodles of atmosphere with the simple use of natural environmental noise – birdsong, running water, the whoosh of the wind – that backdrop the sound of pedalling and bicycle tires skidding along the tracks. The game is arguably at its best with a set of headphones, handheld mode, just riding your bike down a goddamn hill. That means that despite a few little niggles, Lonely Mountains: Downhill feels very much at home on the Switch, and as such comes with our full endorsement, even if you haven’t already experienced it on another format.

Lonely Mountains: Downhill feels very much at home on the Switch, and as such comes with our full endorsement, even if you haven’t already experienced it on another format.