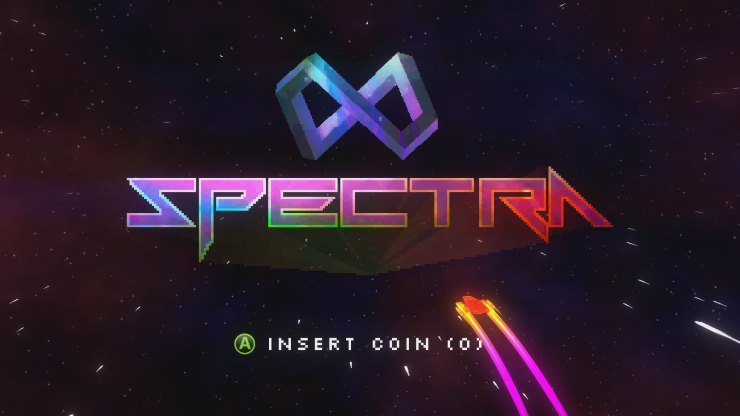 Anyone who has a serious interest in the chiptune scene will be well aware of Spectra, a title built like an interactive jukebox tribute to a bygone age. Spectra tasks you with guiding a little neon ship along narrow runways littered with obstacles and collectables while rampant chiptunes blast out in the background. It’s minimalist and twee, but is it worth your time?

Everything in Spectra is made of one of 5 colour shades of light. There is only one way to play the game, and everything you need to know about it…well, you know that already. You steer left, and right, and that’s it. But simplicity isn’t a bad thing, right? Unfortunately for Spectra, it kind of is, because it just isn’t that fun to play. The challenge is ramped up to near impossible levels when you get deep into the game, but that is just Spectra’s procedural level generation throwing totally unfair tracks at you. That isn’t a win, or a plus point, it’s just bad design. After an hour of play, you will have played all the levels, and probably finished them too, if you could be bothered. Why would you bother? Because you need to hear the music? The music, oh, the music… The soundtrack backing up Spectra is the sole reason I finished it. Hearing expertly crafted chiptunes is always a pleasure, an instant hit of nostalgia that makes me feel gooey on the inside and bleary-eyed on the outside. I was literally buzzing for the first few levels playing Spectra, the sound system jacked up high, sitting slightly closer to the TV than usual, the neon colours penetrating my soul, my mind; my every being is soaring… soaring into… boredom. You see, the chiptune euphoria does wear off after a while. But boy, it’s good while lasts.

Sadly, a game such as this cannot hang on its soundtrack alone, but sadly there’s not much more to say about Spectra. You could try and get to the top of a leaderboard by collecting more of the collectables and not running into the obstacles. Obstacles do your ship damage, you see, which causes you to drop some score points. So don’t do that. And, while you’re at it, don’t fall off the side of the track, because that will reset the level, and you’ll have to start again, ruining the chiptune euphoria in the process. You know what? Just buy the CD.

Spectra is like Icarus, I suppose. Glorious and high flying for a fleeting moment, but quickly burning out and becoming yesterday’s news. If you can pick it up cheap, it will make a good time passer for a few days, especially with headphones in. After that? You’ll soon forget it. Excellent soundtrack.
Easy to pick up.

An acid-fueled tribute to the chiptune scene, Spectra is high on musical euphoria and painfully low on gaming excitement.