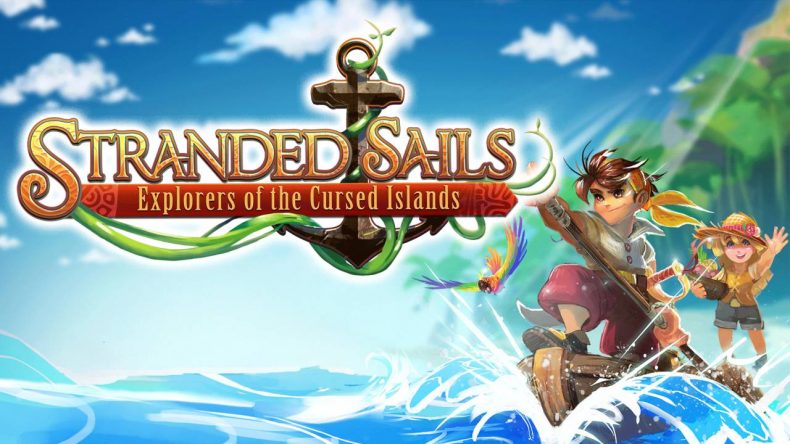 I do love a good survival crafting game. I find the repetitive core loop of scouring for resources, building structures and farming for sustenance very relaxing. Stranded Sails – Explorers of the Cursed Islands or what we will call Stranded Sails from now on pitches itself as an open-world exploration and farming adventure with mysteries to discover. It has bags of charm, and lots to like about it, but there are some fundamental issues at present that prevent me from being able to make a recommendation or not.

The story begins with you about to embark on a journey across the ocean to another land to make a new life for yourself. You are accompanied by your father who is the Captain and a mixed crew, each with their own speciality – Fritz is the fisherman, Teresa is the tailor, Brenda the blacksmith etc.. Halfway into your journey you sail into a great storm that sees your ship wrecked on a mysterious archipelago of islands with your crew scattered in different directions. Your job is to reunite them and build a community for survival until you can leave the islands and continue your journey. As with all survival games you begin with basic tools and gradually through the repetitive loop of gathering resources and hitting various story beats, you upgrade them. The process of crafting, farming and other activities is pretty straight-forward with a neat inventory system classified into tools, seeds and food, all with their own radial menu for easy selection. I played on the Switch, mostly in hand-held, and even on the small screen the placement of seeds, watering crops and digging holes is painless with a useful cursor indicating the area you will be affecting.

You are free to pretty much explore as you wish, however there are certain tools locked behind key moments in the story, and so you are gently guided along with quest log prompts in the top right of your screen that can be toggled on and off as you wish. Much of the minute to minute stuff is a process of making your way to a location, scouring for resources and then travelling back to your camp to craft the new item. Traversal around the map can be a bit tedious at times as your character moves at a fairly sedate pace. There is a sprint option, however this consumes energy at a much faster rate that can only be replenished by sleeping in your bed in the wrecked ship or by eating food. If you do run out of energy you will pass out and wake up again in the camp, thankfully not losing any inventory, but you will have to make your way back over to the location you were in. This process of an energy bar that depletes way too quickly makes much of the exploration a bit of a chore, particularly in the early stages of the game when you haven’t got much food or unlocked any of the more potent recipes that will replenish more energy. Furthermore, your viewable area is quite restricted with no means to zoom out, so getting a bearing on which direction you need to go is quite difficult. On more than one occasion I ventured down a dead end because I couldn’t see far enough ahead of me, and that coupled with a topography that requires you to get to higher ground via a very specific route means you will find yourself wandering around a fair bit trying to find the correct path, all while expending that precious energy.

Visually, Stranded Sails is quite appealing with a simple style reminiscent of games like Harvest Moon, and I was quite taken with the charm of it. The island is bright and colourful with a pleasing night and day cycle that changes the lighting around you as the sun and moon move in the sky. Some of the textures are a bit flat though, with the cave entrances where you can find resources and perhaps some secrets that the islands have to offer, merely represented by a gaping black hole. The first time I saw one I thought a significant portion of the environment had not rendered until I realised I could actually travel through it into the cave itself.

Traversal, a few graphical issues and a mildly frustrating early game are not enough for me to not recommend Stranded Sails, which I would do in ordinary circumstances. My biggest issue is that there are some fundamental, game breaking bugs. On my first save of about two hours, I loaded back into the game to find that all the NPC crew that I had already located had disappeared and I could not interact with any of the crafting stations. After spending a frustrating further forty minutes I reluctantly started a new game. I have subsequently made significant progress in this save, only to find, another seven or eight hours in that two important quest items had been inexplicably removed from my inventory. Furthermore, my quest prompts were still pushing me in the direction I had been when I logged off, but none of the previous progress existed any more – none of the recipes I had spent time learning existed, all the new seeds I had planted were gone, some shacks I had built for my crew had disappeared, quest items were gone and, crucially, no means to recover them as the crew member who gave me them in the first place was in the post quest state that my quest log suggested I was in. I’ve subsequently tried a new save, but this time on Xbox and have experienced issues there also with a menu that wouldn’t minimise meaning I couldn’t interact with anything else in the game. To resolve I had to quit entirely and reload the save, and I’ve also experienced crashes that have sent me back to dashboard and one that caused a strange visual effect that seeped across my entire screen, again necessitating a full reboot of the game.

I want to like Stranded Sails, I am intrigued by a few of the artefacts I have stumbled across during my exploration and I am suitably invested in seeing the story through, however at present the game is unplayable. To have at least three saves be corrupted in this way is just not worth the time effort required to get there. We have been assured by the developer that a patch is coming soon, which will resolve some of these not insignificant issues. Until that point, and after some more time to sufficiently test whether these fundamental bugs have been resolved I’m kind of stranded myself.