previous
Birthdays the Beginning Review
random
next
GNOG Review
1 like 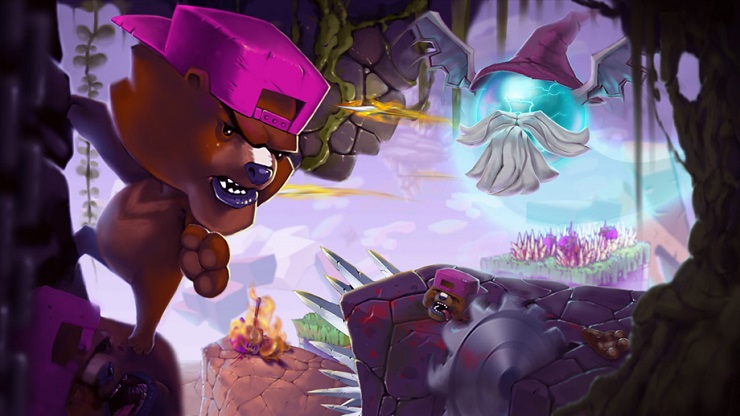 It’s sometimes an ignominy when games in a certain genre get compared to others that came before it, especially as they do a great job of their own trying to create a fresh take on their predecessors. Sandboxes will forever be compared to Grand Theft Auto, difficult action-RPGs are Souls-like, and twitch-heavy, 2D platformers will always be likened to Super Meat Boy. It’s unfortunate because it can do games an injustice, and whilst Super Rude Bear Resurrection may get compared to the latter, it does a much better job than the loveable square of red meat ever did.

You’re a bear – a rude bear, living in East London, probably driving around in a Subaru, listening to Skepta and drinking Carling down the park with your mates (note: this is just a theory, he might prefer Stormzy). When your nemesis returns, you’re summoned back in time to take The Wizard to task. Throughout each world (made up of five stages), you’ll face copious traps, enemies and deadly levels only the bravest of bears should attempt. The level designs are tight, colourful, and full of bastard hard challenges. As you progress, levels get harder, with every themed stage bringing about something tougher than the last. There are huge bolting pistons, spikes, spinning barrels of flames, boulders, and tons more. Enemies are everywhere as well, and they want nothing more than to kill you in the most disgusting fashion imaginable. The intricacies of each world form such a difficult route to the finish line, but like Super Meat Boy, your unrelenting need to succeed takes over.

Load times are minimal, so moments of frustration are erased in a heartbeat, and Super Rude Bear Resurrection gives you chance after chance to push forward, leading to you using death as a lifeline. When you die (and you will die a lot), your body remains where it got smashed, stabbed, squashed and shot, but that also means it becomes a barrier or a stepping stone. For example, in one of the worlds, shooting arrows come at you fast, but if you get shot by one, your dead body ends up stopping any more from getting past. This means you can use your former alive self to block any more arrows from killing you, and subsequently using your body as a moving barricade to progress to the next checkpoint. Checkpoints are frequent, and although it is fiendishly hard at points, there’s always a shining light in the near distance – you’re rarely forced to take on long sprees of torturous obstacles. Saying this, however, doesn’t negate the fact Super Rude Bear’s intensity isn’t a tad suffocating. It’s always hard criticising difficulty, because games like this are supposed to be tough. There are periods where you’ll most likely scream out “oh, for fucks sake,” or “this isn’t even funny now, it’s just unfair” a few times, but that’s kind of the point. Alex Rose has made it unrelenting, but he’s also given you plenty of opportunities to use death as an ally, and to train your responses and reflexes through repetition and routine.

There are boss fights too, and boy oh boy are they a lot of fun. They’re much easier than the levels themselves, which was a little disappointing, but the diversity in their design, and the way in which you take down every one is unique and enjoyable enough that it doesn’t really matter. In almost every case, you’ll use the environments to take them down, whether that’s ice spikes in the ice world or rocks in the Aztec/jungle world. You don’t always need to kill the bosses either; sometimes it’s just about making an escape and the realisation you feel when you’ve cracked each boss is unparalleled. Super Rude Bear Resurrection is going to appeal to many different gamers with many different purposes for playing. Speedrunners will enjoy the fast pace, and those that want a challenge will sure as hell be given one. You can take away the option to have corpses remain where they were once you’ve died, adding another layer of difficulty, as well as other variables to make the game even tougher. The soundtrack is cracking, with loads of different grime tracks playing as you power through, all written by Decco. I get this type of music doesn’t appeal to everybody, but it complements the game perfectly.

It’s a stunner of a game, both visually and mechanically, and if you do indeed love the 2D platformer genre that pushes your reflexes and patience, Super Rude Bear Resurrection is the best out there. The levels are bursting with colour, complexity, and smart encounters, with a bear wearing a purple baseball cap as the game’s protagonist, looking cool af. Seriously, go out and play this game.

Bosses are a bit too easy

If you love games like Super Meat Boy, be prepared to be blown away by Alex Rose's frantic and challenging gem.