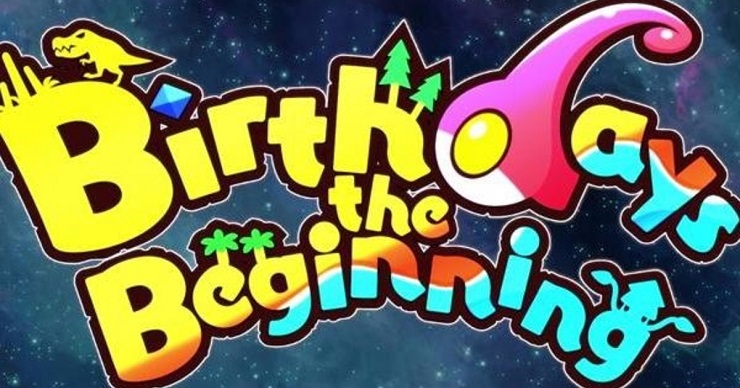 Everybody loves Sir David Attenborough, right? His TV programmes have always been incredibly educational, but also highly entertaining. Over the years, he has taught many generations about the wonders of nature and evolution, and his work will continue to do so for future generations. Why am I writing about the legendary man, you ask? Well, Birthdays the Beginning sees you attempting to create your own ecosystem, bringing life to an initially barren world. Throughout the game, you’ll hopefully see the beginnings of life, from bacteria and plant life, to the birth of your very first dinosaur and beyond. It’s practically a David Attenborough simulator, but it’s sadly devoid of the great man’s presence.

The concept is an odd one. The fact that there’s a story at all is baffling, to me. But you’re out in the woods and see a strange, glowing cube and a tiny creature beside it, which drags you into a new world. In this barren place, you’re introduced to Navi (there’s no, “hey, listen,” going on here), the tiny creature that pulled you out of your own world. For some unknown reason, you need to help Navi bring life to this cube-shaped biome, and that’s where Birthdays the Beginning, erm, begins.

Birthdays the Beginning is almost a cross between Civilisation and Spore, as you’re tasked with creating life from the very beginning. This is all based on the way you shape the world, affecting the ecology and allowing various forms of life to thrive, or even perish. It all takes place in a semi-strategic environment, but with your avatar replacing any kind of cursor. There are also two modes: macro and micro. Micro mode is where you directly shape the land and time stands still, whereas macro mode zooms out to see your cube world as a whole, removing your direct input, but allowing you to move time forward. The tutorial in this game is absolutely essential, thanks to the incredible complexity of the gameplay and its various systems and requirements. Navi will talk you through the basics of terrain alteration and how it affects the overall temperature of the world, and where water will come into play in order to birth new life forms. Navi’s tutorial will also inform you how to use macro mode to move time forward, allowing nature to take its course. If all this is sounding a bit confusing, well, it’s because it is. Partly because the tutorial isn’t comprehensive enough.

In Birthdays, you’re given an avatar with a set amount of HP. But rather than this HP being the difference between your life and death, like any other game, it’s more like action points in a turn-based strategy game. During your time in micro mode, time is paused and you are tasked with altering the terrain to affect the world, but every action consumes HP. Once your HP hits zero, or you’ve done everything you set out to do at a certain point, you need to jump out to macro mode and allow time to pass, recharging your HP in the process. You can consume more HP in macro mode too, making time pass at a faster rate and allowing evolution to go about its business more quickly. This is where the “birthdays” part of the title come into play: the birth of new species. Birthing new species requires very specific conditions to be met, which is where the game starts to show its cracks. You will need to take into account the temperature of the world, or even its water in many cases, to make sure a species can be born and survive, and others require a separate, specific species to be thriving, so that this new form of life can be born. But the game doesn’t really go into enough detail about keeping creatures alive, and although you might have created the correct conditions for something to continue to live and breed, the game just doesn’t seem to work consistently. This becomes a problem, as it can block progress. Capturing new species can help (you don’t actually stick them in a cage or anything), as this basically documents each new species, giving you extra information about their living and birthing conditions.

There’s a nice look to the game, with everything having a slightly cartoony style. Worlds and their inhabitants are swimming in colour, and the (kind of) low poly animals look just lovely as they walk, swim and fly around the map. The maps themselves grow outward with each episode too, with your previous map looking dwarfed in one corner, and they have tremendous depth to them. This does lead to some framerate dips as your world becomes more populated, or if you dig too deep, but nothing too drastic. This colourful look, however, complete with big, fun fonts and an almost arcadey aesthetic, belies the complex nature of the game. It feels like it may be directed at a more casual market, maybe even a younger audience, but the actual gameplay just isn’t fun enough for it to succeed in either of those cases. The first couple of hours are simply spent doing too much watching and number crunching, as you try to balance the environment to allow small species to survive, and very little actually happens on a visual level for it to appeal to anyone on a casual level. Quite frankly, I have no idea who ARC System Works’ game is aimed at.

Its success/failure rate is all over the place as well, and at more than one point in the game, I found myself having to use the trial and error method in order to move forward. It’s actually possible for a species to die out, only for it to be needed later, but the ongoing tutorial doesn’t take this into consideration, refusing to give you this information beforehand. You’ll be forced to go into your library to find out the conditions needed to bring back that dead species, but the current state of your world may not allow for it, or it will take a monumental effort to get the environment back to the state you need. It’s not even clear how you do this, most of the time. This leads to a lot of frustration in the early game, which will certainly put off a lot of people.

Despite the unique nature of Birthdays the Beginning, and how it approaches the god game genre from a completely new direction, I really can’t see it appealing to too many people. It has the potential to be a decent learning tool, but the progression blocks in the early game, combined with a tutorial that just doesn’t explain anything in enough depth, will keep most people from seeing the best bits anyway. Sir David Attenborough is a better bet, if you want entertainment while you learn.

If it was structured more like Universe Sandbox, or if the world behaved more consistently, Birthdays: The Beginning would have been a far more fun and educational experience, instead of a dull and frustrating one.