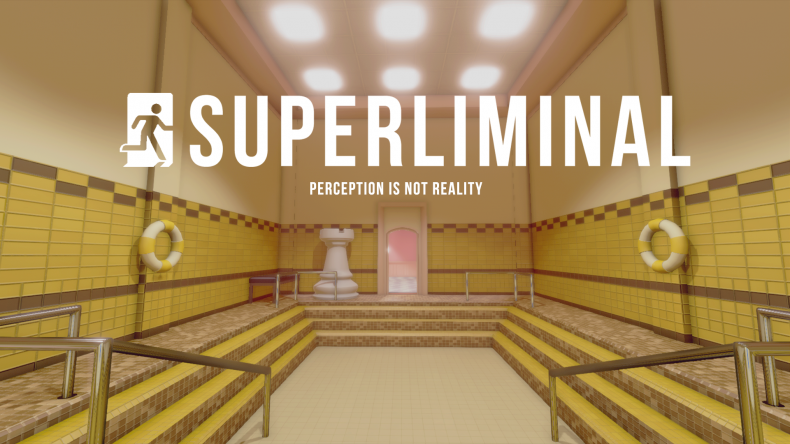 You don’t always have to be a huge fan of puzzle games to appreciate the genre. Sometimes one comes along and, no matter how you feel about them, it just grabs you anyway. Superliminal did this when I previewed it recently, and the full game is even better.

To get it out of the way, I’m going to mention Portal and The Stanley Parable right off the bat. To be clear, Superliminal does things with its puzzles that I have never seen before, but it also definitely tips its hat to those two. This is because it uses a similar narrative style, with a disembodied voice or two being the only direct storytellers in the game, be it an AI talking to you over a tannoy or Dr Pierce talking via tape decks found throughout each level as he hopes to guide you out of your dream. That is the setting for Superliminal: a sort of Inception-like dream within which you have become trapped and the only way out is to go deeper, all the while solving mind-bending puzzles that are almost exclusively perspective based. You find yourself constantly woken by an alarm, repeating the same areas but with new challenges each time, before things get increasingly surreal and the puzzles begin taking new turns.

At heart, Superliminal is a first-person, narrative-driven puzzle adventure. Puzzles begin simply, easing you into things by giving you blocks to place, using perspective to change their size and progress. You might be wondering how it works, and the only way to explain it is as follows: say you hold up a cube, it’s size is small, but bring it closer to your eyes and you can imagine that it’s big enough to fill a room. Well, in Superliminal that is exactly what happens. If you let go of an object while it appears to be big enough to fill a room, it will actually fill up the room. It’s ingenious and you’ll sometimes wonder just how Pillow Castle Games has managed to pull off these amazing tricks.

Puzzles get even more incredible as you progress, too. Remember the Riddler puzzles in the Batman: Arkham games? You would have to line up the dot on a nearby wall, with the curve on a building across the street, so that it forms a question mark. Superliminal does something similar, only lining up pieces of a painted object will allow you to pluck that now-3D object out into the world. It really does feel fresh and unique, despite its nods to Portal, etc. There is some humour in here, too. It’s mostly from the AI chiming in with snarky announcements, but sometimes it’s from Dr Pierce’s comments, or even from notices written on the whiteboards that are dotted around the environments. A lot of these comments and notices are important too, either filling in little gaps of the story or outright directing you to the correct puzzle solutions. In fact, there were only one or two puzzles in the whole game that felt a little out of place, with solutions that were neither hinted at nor perspective-based, with one particular scene leaving me wandering in a loop for far longer than I’d care to admit. It came close to tarnishing the experience, actually. Thankfully, I pushed through and eventually worked out how to progress through trial and error, and soon began enjoying myself again.

I can’t pretend that I fully understood what was going on throughout the entire two-hours Superliminal took me to finish. I wandered through increasingly surreal environments and solved their puzzles, usually by simply looking around and using a little bit of logical thinking. Some were more taxing, but if I can play through a game like this without needing to consult a guide, then anyone can. In fact, I would actively encourage anyone to play it. Not just for the unique puzzles and to see the mind-boggling things it does with them, but for its surprising message that just might be what you need to hear in these times of uncertainty.

A couple of out-of-place puzzles

An excellent puzzle game with a fun sense of humour, and an important and surprising message behind it.