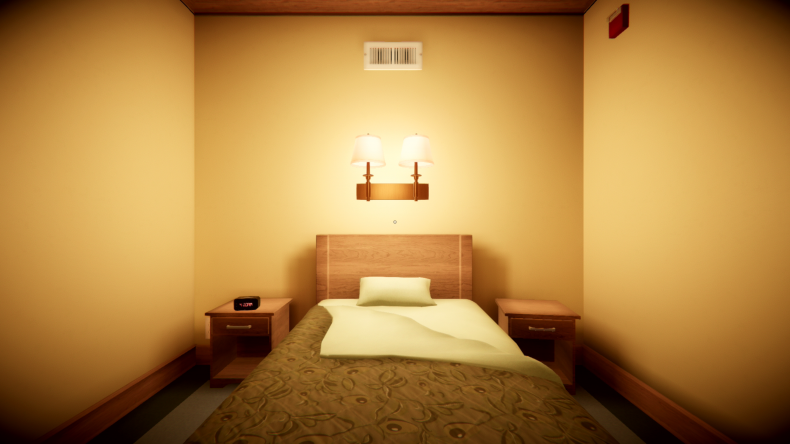 Switch Re:port covers the Nintendo Switch version of a game. Superliminal was released on PC on November 12, 2019 and scored 8/10.

Superliminal is a fantastic game. I knew that going in, having played it previously on PC. Its unique brand of perspective-based puzzles, mixed with a narrative and style that conjures memories of Portal and The Stanley Parable, makes for a fun, thoughtful and sometimes humorous experience.

And the Nintendo Switch version is no different.

It’s actually a super impressive feat, as some of the mind-bending puzzles seem like they would need a decent amount of grunt to work properly. Not that the Switch version handles everything without issue, as the framerate does dip from time to time, but never enough to compromise the gameplay. Its performance is essentially the same in handheld or docked, too, and it looks great either way. In Superliminal, you’re trapped in a dream world. Literally, your character is stuck inside a dream. It’s part of an experiment, you see. But something clearly went wrong, and the only way out of this dream is to go deeper. That means puzzles, lots of puzzles. And not a single Leo DiCaprio in sight.

The puzzles here are interesting and often mind-boggling. Not necessarily because of their difficulty, but because of their scope and inventiveness. It’s all about perspective, as you can manipulate the size of objects simply by lining them up in the right way. If you hold something close up, it looks larger. Drop it in this state and it will actually appear bigger within the environment. It really is a unique idea and that’s part of what makes the game so special.

Superliminal’s narrative is fairly simple, but with great depth for those wanting to go looking for it. Initially, a suspiciously computer-like, female voice (probably a nod to GLaDOS of Portal fame) echoes through the halls, trying to explain your situation while sometimes berating you. Soon after, you come across old cassette players dotted throughout each area. They play messages from a Dr. Glenn Pierce, who is doing everything he can to find you within your dream world, in order to pull you back to the real world. Both of these characters, much like those of Valve’s puzzle classic (and its equally classic sequel), provide an insight into the game world, as well as great entertainment. You’ll certainly crack a smile, when things begin taking bizarre turns. And those bizarre turns take you through some rather well-designed areas, during the game’s two hour length. It rarely recycles ideas, always trying to do something new to keep your brain working, but that doesn’t mean that every new idea lands. One or two puzzles feel a bit harsh, almost going against the flow of the rest of the game. The game normally introduces puzzle solutions organically, teaching you new techniques ahead of time, planting ideas in your head so you have an idea of what to do in the next area. Somewhat annoyingly, a few puzzles come along that feel almost random, having nothing to do with anything you’ve learned so far. One in particular is really frustrating, as even when you’ve found the solution, it still doesn’t make sense and that removes any sense of accomplishment for that puzzle.

Luckily those awkward and frustrating moments make up just a fraction of a much greater whole. Superliminal does exceptional things with its puzzles, things that feel truly different despite wearing its influences on its sleeve. It’s a game with a clever narrative and a potentially important message, wrapped in a light, entertaining, first-person puzzle adventure. One that really deserves to be played.

Regardless of whether you play on your TV or in handheld, Superliminal remains a clever, inventive and entertaining puzzler on Nintendo Switch.