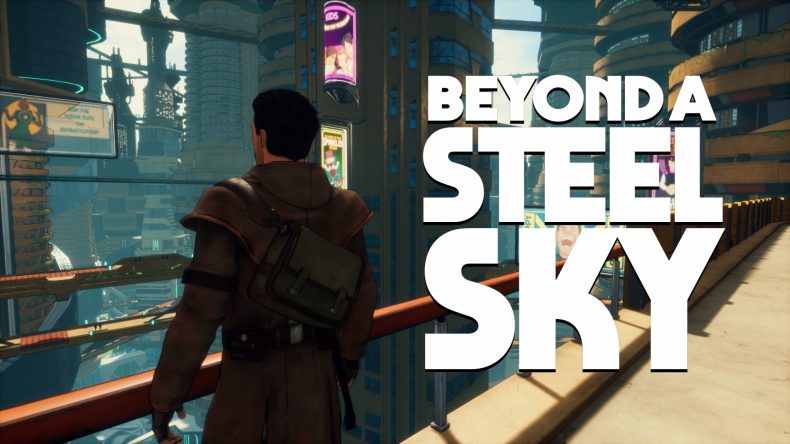 The memory is a funny thing. For example, I can’t remember which past review I opened with that same “memory is a funny thing” line, but I’ve definitely done it. At least twice. Putting my own ouroborous-like self-repetition to one side though, the reason I once more draw attention to the human memory and its ability to be a big old tricksy bastard is Beneath a Steel Sky, the 1994 PC point and click adventure game to which Beyond A Steel Sky is the much-anticipated sequel.

See, I remember playing Beneath A Steel Sky for years as a (presumably) spotty adolescent. I have images of the screenshots ingrained in my brain, even snippets of the dialogue, but upon booting up the sequel I realised that I actually remember next to nothing of importance. I don’t remember it being set in a dystopian, far-future Australia, or that the protagonist Robert Foster is literally named after the famous blue-canned lager which, apparently, survived the apocalypse. Not that any of it really matters too much. Beyond A Steel Sky is a clever sequel, returning with the same protagonist and setting in order to appease the stalwart fans, but presenting a brand new story that fills in the background pretty neatly and then gets on with telling its own tale. Having saved Union City (the metropolis formerly known as Sydney) from corruption alongside his now deified robot buddy JOEY, Foster has retired to the Gap (the barren wilderness formerly known as the Outback) to live among the simpler folk.

However, tragedy strikes when his friend’s son, Milo, is taken prisoner by a massive walking tank called a STALKER and possibly whisked away to Union City with a bunch of other children. Habitual hero Foster takes off in pursuit, quickly arriving back at the city gates with only his wits to steer him. Foster is a resourceful chap, too, able to store all sorts of goodies to pull out later and solve puzzles with. The classic point and click needs a real renaissance, frankly, and Beyond A Steel Sky testifies to this fact.

As Foster, you’ll traverse a variety of enclosed 3D spaces interacting with a multitude of NPCs and devices in order to unlock the way forward and progress the story. For example, in an early area you’ll come across a lass named Ember who can sell you a stolen U-Chip implant that will allow you to enter and move around inside Union City, but in order to get it you’ll first need to catch the aggressive “gang-gang bird” that stole her Data Transfer Tool, or “deet”. To do this, you’ll need to find a lure to trick the bird to a specific spot and make it drop the deet. This puzzle in itself took me a good 20 minutes of exploring and talking, during which time I was also following up leads about the STALKER. After this section Foster will also receive a Scanner that allows you to hack certain devices by altering their internal logic paths to, for instance, open a door when the person using it is flagged as unauthorised. It’s mostly quite simple stuff, and there are some serious red herrings thrown around that achieve nothing, but it’s often an invaluable tool.

Once you reach Union City it becomes a more open and complex game. You’ll follow a linear story, but are often able to travel between districts to refresh your memory on certain leads or apply knew knowledge or items to existing problems. With the now universally-loved JOEY missing for several years, Foster digs deep into a city-wide conspiracy that reaches to the upper echelons of government. Also, that fake ID he’s using might just implicate him in the conspiracy, too.

The dialogue is shot through with humour in a similar, though evolved, fashion to the first game. Original creators Charles Cecil and Dave Gibbons bring the same care and charm to this as they did to the first game back in 1994. Foster is a fortunate yet reluctant hero, often getting out of scrapes in the nick of time, and while there’s no direct combat there are fail states when you mess things up. That said, if you get stuck, a very generous Hint system will do the legwork for you, coughing up a hint every 30 seconds that don’t so much dangle the answer just out of reach as they do smack you in the mouth with it.

While the cel-shaded visuals are pretty enough and lend Beyond A Steel Sky a palette reminiscent of Borderlands or The Outer Worlds, it’s a very subdued game. If anything it may even be a little too laidback for its own good. Even when running Foster doesn’t run anywhere, and if you get stuck on a puzzle and don’t want to use the hints you may find yourself trotting around the same small area on an endless loop until your useless brain kicks in. Most of the puzzles aren’t overly taxing, but some do require very direct thinking and often I got stuck trying to be clever instead of just, I don’t know, asking someone with access to a house’s security system to open the windows for me.

There’s something timelessly playable about point and click adventures, though, and this is no exception. You can lose hours wandering around Union City, following up leads, investigating dead ends and chatting up the locals in the hope that one of them will give you something that will inexplicably save your life later. The humour and mystery are enough to carry Beyond A Steel Sky through, and if you did play the original and you do remember it, there’s just enough nostalgia here to make it worth a return to Union City. If you didn’t, well, it’s still a likeable, competent adventure game that will keep you smiling and guessing throughout.

Moving around can be clunky
Very subdued

After 26 years, Beyond A Steel Sky is a strange yet welcome sequel. Not quite fresh enough to stand alone nor nostalgic enough to stir the memory, it nevertheless manages to thoroughly entertain if not thrill.

You may also like
BEyond a Steel SkyCharles Cecil