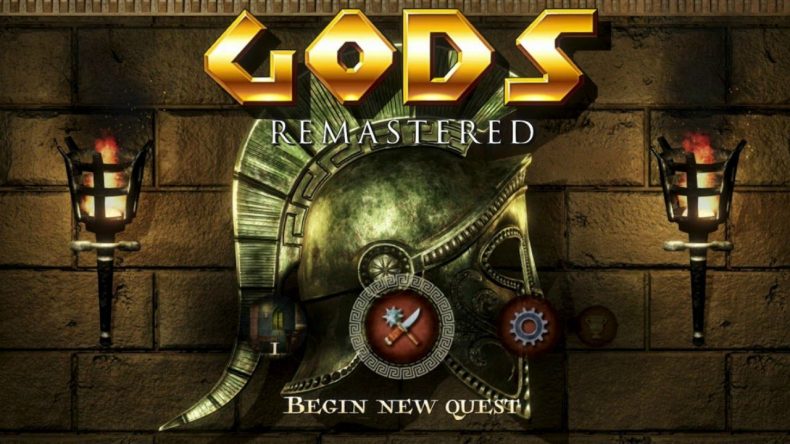 The human memory is a funny thing. More a lens than a window, able to re-colour, resize, exaggerate or shrink, able to alter the past the way stained glass alters light. As a gamer on the creaky side of 35 who’s been playing games since I could sit up straight, I’ve got more than my fair share of remastered memories. Every now and then, to my dismay, someone decides to take those memories out, remove the fancy new colours, and show me them in the cold light of day. They did it with Flashback, they did it with half of the Rare Replay Collection, and now they’re doing it with GODS.

See, once upon a time a powerful pantheon of deities ruled over the lion’s share of the Gaming Kingdom, and they were known by all who worshipped them as the Bitmap Brothers. And in those dark times before energy drinks and Doritoes, before the Internet, when gaming was young and humanity knew no better, they bestowed upon their subjects some of the most innovative and influential games in history. Alas, like all things of antiquity, when examined by today’s standards, even such legendary games are little more than dusty old heirlooms. GODS was incredible in 1991. I know it was, because ten-year-old me played nothing else for weeks and weeks on my granddad’s Amiga. Games were meant to be hard then, we didn’t rage-quit like wimps whenever we had to start a whole level again because the controls made less sense than a Nicki Minaj song. I remember thinking how incredible GODS looked back then, and leaving the title screen on for as long as possible to listen to the amazing title music. And, dammit, GODS was incredible back in it’s day. It was the pinnacle of platforming excellence, with a vast array of enemies, cool puzzles, and tons to collect. It holds such a special place in my heart that the first time I saw the remastered version I shrugged and went, “Looks the same. What’s different?”

It’s only by pressing the right stick and switching between the new skin and the old that you’ll fully appreciate just how much of an overhaul it’s had, aesthetically speaking. The environments are much prettier now, there’s a great attention to detail in both enemies and backgrounds, despite their simplicity, and what’s more, the remaster captures and displays the same atmosphere we fell in love with almost 3 decades ago. Sadly, though, that’s where the improvements begin and end.

The story follows legendary hero Hercules, who has answered the call of the ancient Greek pantheon to oust four Guardians who have taken over the citadel on Mount Olympus and kicked them out. The reward is a Divine Favour, and our disproportionately muscular hero wants to be equal to the gods. So, a favour for a favour. It’s a simple premise that pretty much lays itself bare on the first screen and let’s you get on with killing things and pulling switches for 12 levels. Unfortunately for those expecting to be blown away all over again, the graphics are the only improvement. It’s a remaster that barely goes beyond skin-deep, presenting a pretty but cumbersome and unwieldy game that will repeatedly test your patience way more than your skill. It’s hard to describe how GODS feels to play now, but the words “not good” are a succinct way to start. The main character walks like he’s just spent six hours in a saddle made of rocks, and the ancient animations, while re-skinned, appear unnatural and stiff.

You can only jump forwards, and there’s a set distance that doesn’t vary, so if you mistime a leap by the width of a Minotaur’s arse hair you’re not going to make it. Likewise, the only weapons are ranged, so it plays like a clunky side-scrolling shooter. Certain weapons also have a specific arc, which also requires god-like precision or, alternatively, the kind of throw and pray approach that soon becomes turgid. One issue that will affect different people in different ways is the game’s habit of removing items from your inventory for “balancing”. I know why it happens because I had to look it up, but basically if you’re going into, say, a boss fight and your weapons are too powerful, the game will simply take them away. It’s annoying and very outdated.

I’m not going to say it’s all bad, because it isn’t. There’s still a certain amount of charm and likeability here, and it’s ridiculously nostalgic to play with the old graphics. What was fun in ’91 will still be fun now, to a certain type of gamer; I just don’t want people going into this expecting something mind-blowing. Levels are beset with enemies and traps, some of which can’t be seen until you’ve almost walked into them. As a result you’ll die over and over, only to be shot back to the nearest savepoint. And bear in mind, that “savepoint” in the 90s usually meant the start of the level. And guess what? They haven’t remastered those either. The music has been reproduced though, and the new score is pretty good – but in act of sacrilege the “Into the Wonderful” theme music you may remember is absent.

It almost breaks my heart to say it, but GODS just has not weathered the test of time. It’s an old game and it plays like one. Retro fans and challenge addicts may get a kick out of this, but most younger gamers won’t give it a second glance. I won’t disparage what GODS is and always was, which is quite simply one of the greatest of its time – but that denomination of era is crucially important here. Because judged up against its contemporaries, the original was a powerhouse – but there’s simply no real place for it in 2018.

Adds nothing but visuals
Dated, even for a retro game
Clunky, slow and imprecise

I won’t disparage what GODS is and always was, which is quite simply one of the greatest of its time - but that denomination of era is crucially important here. Because judged up against its contemporaries, the original was a powerhouse - but there’s simply no real place for it in 2018.