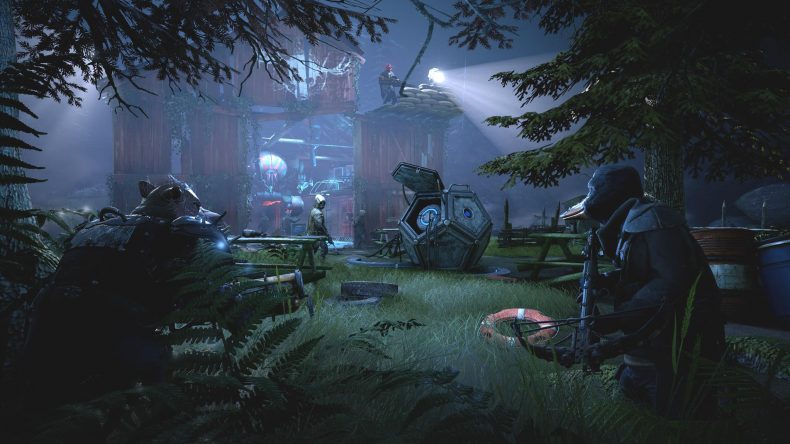 It took longer than I expected for developers to start cherry picking elements from Firaxis’ seminal tactical strategy franchise XCOM. But in recent years we’ve had several contenders roadie run their way into the arena: the colourful Mario vs. Rabbids: Kingdom Battle, cold-war thriller Phantom Doctrine, and now Mutant Year Zero: Road to Eden, an apocalyptic survival tale set in the universe of the popular pen and paper RPG, Mutant Year Zero.

Whereas the other games on the list riff heavily on XCOM, it’s Road to Eden that really tries to do something brand new with the formula. Set in a far future Earth ravaged by a nuclear war, the world of Mutant Year Zero is a harsh, burned-out shadow of its former self. Sure, nature has reclaimed much from humanity, weaving greenery through the gutted husks of cars and high-rises, but it’s a dangerous, irradiated place peopled by mutants and ghouls, both the result of evolution getting a helping hand from nuclear fallout and genetic science gone horribly wrong. Your protagonists are a pair of mutant “Stalkers”, trained to go out beyond the Ark, humanity’s last city, to scavenge supplies and, where possible, eliminate ghoul threats. Bormin is a mutated boar with a grizzled outlook, while his partner Dux is an anthropomorphic drake with a sardonic attitude and a sharp beak. Tasked with heading out far from the Ark to find a missing Stalker named Hammon who’s gone off an unsanctioned quest to find the mysterious, legendary Eden, the two bickering buddies soon meet Selma, one of Hammon’s trio, who goes along for the investigation.

Considering the story is divulged through dialogue, scattered collectibles and static cutscene, the world-building is fairly impressive, but it does feel like the set-up for a larger universe. The world is a mist-shrouded forest, pierced here and there by claws of rusted steel and the forgotten relics of a lost civilisation. The dialogue and voice-acting are pretty good, though the script is sometimes a bit off. There are guns and electricity, but there don’t seem to be any working vehicles or radio communication. Also, some of the things people have the, like pizza or students, don’t sit right. But I haven’t read the comics for context, so I won’t comment too much.

The biggest departure from the XCOM formula is that there are no missions; instead you’re free to explore each game area, searching for secrets and loot, and – most importantly – the best path to victory in a given encounter. Stealth plays a major part in Mutant Year Zero, as you’ll quite often find yourself in areas filled with enemies many levels higher than you. In these moments, engagement is suicide, but stowing your flashlights shrinks an enemy’s field of awareness and allows you to creep around unseen. Pressing Y to hide renders you effectively invisible, and even enemies standing right in front of you, facing you, won’t see you. It’s both incredibly gamey, and very cool, as using stealth to sneak round enemies or to get into position for an ambush is never less than tense. High and low cover, elevation and range all factor into a fight, and I’ll admit to struggling with many encounters, even on Normal and with liberal save-scumming. You’re almost always outnumbered, and enemies often have a lot more health than you. Every battle becomes a puzzle, a conundrum to pour over like a chess game, trying to stay a move ahead and praying your shots won’t miss. Which, sadly, they often will. Even with a 75% chance to hit, my shots often miss, and it can be devastating when they do. Certain enemies can call on reinforcements, some can revive dead units, some can charge through your cover and reduce it to kindling; others still can inflict psychic damage on any of your characters in range.

To your advantage, though, you have your mutations. Points earned through levelling up allow you to unlock passive and active perks. The former mostly involve increased stats and extra actions per turn, but the latter mix up lots of different skills. For example Dux and Farrow (a sharp-tongued fox and one of the two recruitable characters), can sprout wings to reach higher ground, Bormin, being a hog, can eat corpses to regain health, and psychic Magnus can mind-control enemies or move from cover to cover without being seen. These skills make for a wonderfully diverse team of 3, and offer a surprising number of avenues in each encounter. My preferred method is to surround and ambush as many units as possible, and use each character’s silent weapon. Stealth kills aren’t detectable by the enemy AI, and it’s a good way to thin the pack.

You move from area to area on a world map, and once you’ve been somewhere you can fast travel to and from it any time you’re not on combat. Dead enemies stay dead (and will never be discovered because, well, the AI isn’t programmed like that), so you could clear out the scouts and patrols in an area before jumping back to the Ark to upgrade or resupply. Here you can buy grenades (frag, EMP, smoke, Molotov), med-kits, and even weapons and armour using scavenged scrap as currency; or you can trade old world artefacts like cooler boxes and radios for permanent squad upgrades. You can also add scopes and modifiers to weapons, or trade parts to permanently boost damage and crit chance.

Despite some issues with the chance-to-hit mechanic and some odd AI behaviour, Mutant Year Zero: Road to Eden is a blast. It takes a while to recruit Magnus and Farrow, but once you’ve the option of diversifying your team it becomes much more satisfying. You’ll also have better guns, armour and stats by then too.

The Bearded Ladies Consulting have done a solid job bringing the property to console, creating a superbly-crafted tactical RPG with intriguing characters, a cool universe and some fantastic turn-based action that genuinely feels unique. I did encounter a couple of bugs, such as characters getting stuck in cover, and it crashed once during my playthrough, but overall it’s a good-looking, sometimes intense experience that’s more than worthy of existing in the same genre as an illustrious classic like XCOM.

A unique, good-looking, intense experience that's more than worthy of existing in the same genre as an illustrious classic like XCOM.