Tales from the Borderlands: Episode One – Zer0 Sum Review 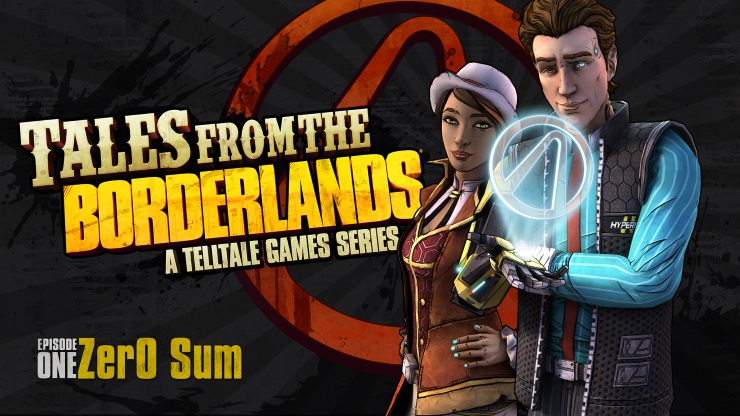 Let’s be honest: these days, you know what to expect when it comes to Telltale-developed games. An almost complete focus on narrative, where your enjoyment boils down to a few key things: firstly, whether it’s technically up to scratch; and secondly (perhaps most importantly), whether you like the franchise the series is based upon, or whether the story is good enough to transcend the original source material and drag you in anyway.

Right away, forget about any technical issues – on PC anyway. There, done, the engine is rock solid, there is no slowdown, there are no awkward pauses; it’s great.

With that out of the way, it’s fantastic to also be able to say that Telltale fully understand the Borderlands universe. Although it’s not a laugh-a-minute type of script, there are enough jokes that hit hard to break up the otherwise semi-serious story. I say that, because it’s impossible to take anything in Borderlands too seriously, as at any given moment a bandit may appear and spout utter gibberish at you. You’ll be playing as Rhys and Fiona, two characters who are worlds apart but end up sharing a common goal. The story is told from their perspectives, as they’ve both been kidnapped and see their experiences very differently. Fiona is a grifter, out for a quick buck with her sister and father-figure. Rhys, however, is after revenge on Vasquez, his rival at Hyperion corp, who’s stolen the lead on a promotion that was rightfully his. He’s discovered a business deal that he can sabotage, that includes Fiona’s gang. Their paths are interlinked beautifully, and the first time you switch to Fiona is masterfully done, at the pinnacle of one of Rhys’ moments – then cleverly, and fluidly afterwards, a few more times before the final teasing conclusion.

The two characters are voiced flawlessly by Troy Baker and Laura Bailey, though Chris Hardwick’s Vaughn (sidekick to Rhys) is excellent, as is Nolan North – someone who I can see becoming a major player as the story unfolds. In fact, Zer0 Sum acts as a fantastic opening for Tales from the Borderlands, that will take you around two and a half hours to get through. Yeah, that’s right, far longer that most Telltale episodes. Villains are introduced, plots and sub-plots revealed, and they are all interesting, diverse, unique ideas, and characters, that make it one of the best opening seasons they’ve put out thus far.

And that all comes back to Telltale understanding Borderlands. It oozes style and charisma. The late-credits are met with a song that fits so well, but I won’t spoil it here. There are plenty of action sequences, and every time you think “how will this work, not being a first-person shooter?”, Telltale pull a trick out of their bag that is both clever, yet makes sense and keeps with the canon. One sequence brought to mind the way Edgar Wright cuts together quick sequences in Spaced, and it works so bloody well. There are some new ideas here, too. Rhys is genetically altered, and has the ability to scan objects with his eye. This is mostly used for fleshing out the world a bit more, but it does have some effect on the story and is used in key moments. Conversely, Fiona is more money-focussed, and she can search the environment for cash that can be used to change the story. It appears to only be slight, but there’s one moment that could definitely play out completely differently if money is spent in a different manner. Other than that, it’s the standard Telltale formula, so you can expect your “Q” finger to get a hell of a working out.

One thing this first episode does suffer from slightly is a lack of clear choice. Obviously it’s hard to speculate on what impact the choices you do make will have later on in the story, but on first glance they seem fairly black and white, and limited to specifically this episode. That said, there are so many classic moments in Zer0 Sum, that it can be forgiven for wanting to put its best foot forward for now. In fact, it’s nice to have that water-cooler feel back in Telltale’s games. It’s a testament to the volume of those moments that I’ve barely touched upon the Vault Hunter involved – but I’ll leave that for you to enjoy.

With a fantastic cast of starring and supporting characters, a story that appears to have multiple levels to it, a cracking script, and a hitch-free engine (though it’s the first episode, so let’s revisit that later, perhaps?), Tales from the Borderlands has taken me completely by surprise. As someone who enjoys both Telltale and Gearbox’s games, this is a marriage made in heaven, but there’s so much style and intrigue that anyone can enjoy this. I can’t wait to see how this one plays out, because, based on this first episode, this could be Telltale’s best yet.

Sensational voice acting.
A great set up for the series.
Really "gets" the source material.

A bit slow to start.
Choice seems limited for now.

An exciting opening to a series that could end up being Telltale's best yet. There's something here for everyone.