The Council Episode One: The Mad Ones Review 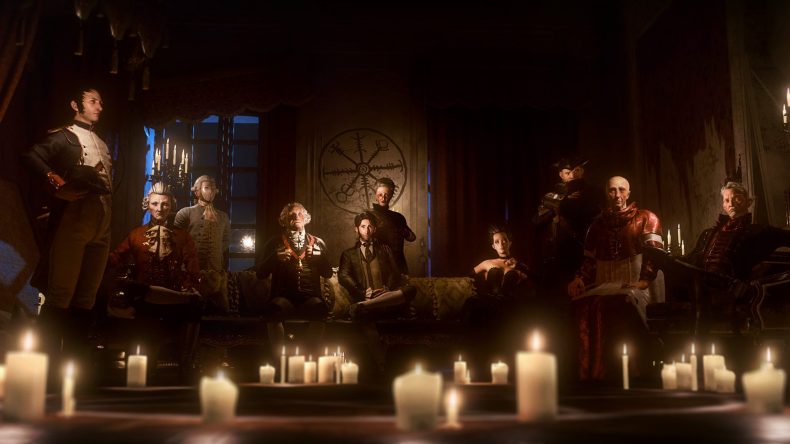 Point and click adventure game The Council drops you into a shadowy world of political intrigue and bureaucracy that, in its first episode, shows potential with an interesting world and plot but is far too dry and drab to be completely captivating. The opening episode to a series should grab you instantly, set its hooks in deep and not let go, but with The Council being such a slow burn this opening may not bring people flocking back to find out what happens next.

After a fairly cliched opening in which we’re introduced to our protagonists, the playable Louis de Richet and his mother Sarah, who are both members of the mysterious Golden Ordern, as they escape their bonds and knockout their captive we next meet Louis a month later, in January 1793. He’s just landed on a rocky, stormy island in the middle of the channel which is home to Lord Mortimer and his notorious parties. Louis has arrived upon Louis request as Sarah has gone missing on the island and she needs to be found. Making pleasantries with a Duchess all done with, The Council’s many interesting systems start to reveal themselves. First of all you must choose what Louis’ occupation is: detective, occultist, or politician. What you decide will determine what skills Louis has available to him at the offset, which in turn will change the way in which the story will unravel for you. I’m sure each player will wind up at the same destination come the credits, but the way in which we all get there will be different. As a detective I was able to rip up a piece of wood from a wharf which revealed a key to open a gate. As a politician I wouldn’t have been able to do that and would have had to get access through the gate another way. All skills can eventually be unlocked, through skill points and reading a manuscript at the end of each chapter, but your strongest will always be determined by what you choose. Louis has a certain number of effort points to use in each chapter and the higher level you are in a certain skill than the less effort points it takes to use it.

The skills don’t only help you in puzzles, though, they also come in handy in conversations. Your abilities and knowledge will open up different conversation paths which, if you play your cards right, will get you what you want. Each character on the island has weaknesses and strengths, if you can discover a character’s weakness then exploit it you will be able to win them over or best them in a debate.

Debates come in the form of confrontations, in which you have to choose the right thing to say to a character, by learning what they want to hear, in order to win. These conversations can be failed if you make too many blunders, meaning you could miss out on a juicy secret or lose an ally. On the final stage, which will repeat it self for a while to give you a few chances, you can fail the entire conversation for getting it wrong even if you got everything else right. The possibility of failure and having to deal with the consequences is something I like in The Council. You have to be thoughtful because if you just rush bull-headed into things then it will backfire. I was trying to reveal a message written in invisible ink and I tried putting ash on the note to reveal it. Instead I lost half of the message when I finally did reveal it with flame.

So there are some interesting systems in place to give some conversations actual stakes and give you a skill tree that has a real effect on proceedings. However, the presentation, especially in facial animation and the majority of the voice acting lets it down. The manor itself, with its walls of Renaissance paintings and grand statues does look pretty good, but a lot of the faces look like strange waxworks that don’t move properly and are dead eyed. The voice acting is what really annoyed me though. True, a lot of the dialogue may not have sounded good whoever was saying it, but a lot of the delivery, from Louis especially, just had no emotion or urgency in it at all. Louis just sounds like a moaning child most of the time. The plot, though, is intriguing. Sarah has gone missing and Louis is trying to find her while following clues she left for him, all the while he’s trying to negotiate dinner tables with high political, military, and religious figures. Both George Washington and Napoleon are at this party and I always like it when real life historical figures are in fictional settings. As Louis continues to dig he encounters Elizabeth Adams, the thought-dead daughter of John Adams, and things only continue to get weirder. So even though a potentially interesting story has been set up, the first episode spends too much time dawdling in dull conversations rather than getting to the good stuff that it I fear it may leave some players too bored to want to explore further. This isn’t helped with very rudimentary puzzles in which the answer is often just spelled out through Louis’ internal monologue.

There is a lot of potential for The Council to improve in further episodes. There’s a base of a good story here, with unique conversation systems to back it up, but as the series goes on The Council needs to get more concise and stick to the interesting elements.

The opening episode isn’t exactly the most gripping of affairs, as this slow burning, political drama takes a while to get going and isn’t helped by poor presentation and dull puzzles. But there is potential here for an interesting story to be told in future episodes.

You may also like
Big Bad WolfFocus Home Interactive

Episode two of narrative adventure game, The Council will release mid May