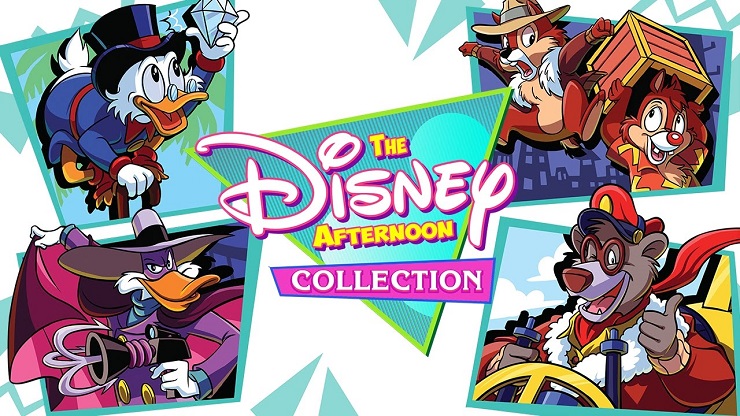 Being a late 80s/early 90s kid was bloody marvelous when it came to kids TV. Teenage Mutant Ninja Turtles, Thundercats, and He-Man were what I spent most of my time watching, but when it came to Saturday morning, there were only a few cartoons I wanted to watch. Disney has some cracking shows, but I was obsessed with DuckTales and Chip ‘n Dale Rescue Rangers. They were so good, and when I think about them now, I can’t get the theme songs out of my head.

My first games console was the NES, and one of my first games was DuckTales. During its lifespan, I also had TaleSpin and Chip ‘n Dale Rescue Rangers, but I don’t remember any of them being as challenging as they are in The Disney Afternoon Collection. Firstly, getting to play these NES Disney games on my PS4 is brilliant, looking exactly as they did back then but with a shiny PS4 sheen, playing exactly the same as well. It’s certainly a must for anyone who loved them as a kid, but I wouldn’t be so sure if you weren’t exposed in your younger years. The collection is comprised of DuckTales, DuckTales 2, Chip ‘n Dale Rescue Rangers, Chip ‘n Dale Rescue Rangers 2, Darkwing Duck, and TaleSpin. Each game is a 2D side-scroller, offering very similar mechanics despite them being different games. In DuckTales, you play as Scrooge McDuck, and you can jump, and use your cane to attack enemies or bounce off their heads (much like Shovel Knight). In Chip ‘n Dale Rescue Rangers, you’ll run around picking up blocks and throwing them at enemies, and in Darkwing Duck, you’ll shoot enemies with your gun. The most diverse game of the collection is TaleSpin, as you play the game riding around in your plane, changing direction and shooting enemies with your mounted guns.

It’s surprising how difficult the games are. I can’t remember struggling as much as I did on DuckTales back when I was a child. The controls can be unresponsive, and using your cane to hit a rock into an enemies face isn’t as instantaneous as I would’ve liked. Maybe I’m just getting old and my reactions aren’t as sharp as they were back then, but I’d rather not believe this theory. In order to combat the difficulty levels, the collection gives you the opportunity to rewind any of the games at any point, meaning you never have to die, and the loss of your final heart can be prevented. It came in handy a lot, especially in DuckTales as this was the trickiest of all six titles. Darkwing Duck is probably the better of the six games, and despite me never really watching it as a kid, I enjoyed playing this one more. You can hang off platforms, use levers to bring down ladders, and use your gun to defeat enemies. It seems to work much better in this game, and I never had any problems with button response. One thing that is prevalent throughout all six games is how advanced both the music and visuals were for the NES. The theme tunes all feature in the games, and the soundtracks can all be listened to in the menus before you load them up. As for the way they look, the level designs are great, all feeling diverse and detailed beyond what the system seemed capable of at the time.

My wife sat and watched me play, and somehow she’d remembered exactly where some of the secret locations were in DuckTales, managing to help me progress. She’d played the game religiously as a kid, and her knowledge of the layout to the African Mines gave me even more of a reason to love her. It goes to show how important these Disney games were to our childhood, but I’m not too sure anyone playing games nowadays would be too bothered about playing this collection. Retro is considered cool nowadays, but unless you know the characters or the cartoons, I’m not sure there’s anything too appealing. Saying that, though, there are Time Attacks and Boss Rush modes which give gamers a chance to flex their competitive muscles and compete against players around the world through online leaderboards. The bosses aren’t too taxing, and blasting through these is a lot of fun, but trying to get through them at speed certainly is a challenge.

The Disney Afternoon Collection offers six great NES games to play on current gen consoles, and even though they haven’t really been touched beyond a HD upgrade, they’re still great fun to play. Yes, they can be challenging, but the ability to rewind, repeat, and conquer makes it much more appealing, and the two competitive modes give more reasons to play the games. There’s also loads of cool concept art from the original games, so if you loved them as a child, there’s more of an insight into how the games were made.

This collection reminded me how much I loved the games as a child, and getting the theme songs out of my head is going to take a great amount of time.