previous
Guardians of the Galaxy: The Telltale Series - Episode 1: Tangled Up in Blue Review
random
next
The Disney Afternoon Collection Review
1 like 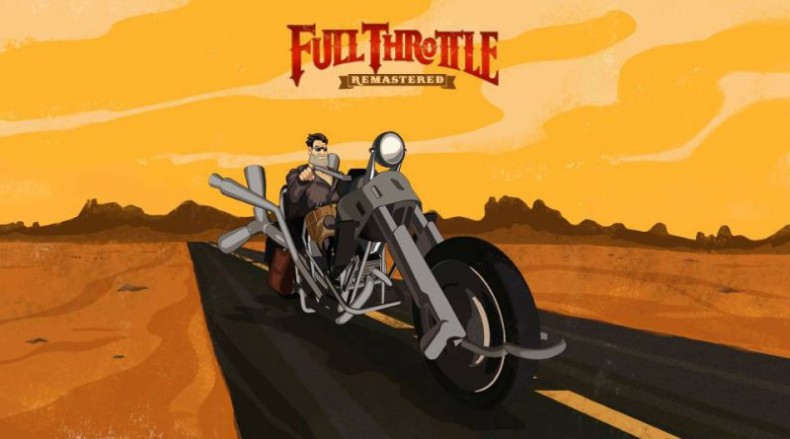 While the 90s were full of adventure games like Grim Fandango and the likes for many, I never really played any of them back then. I was playing Epic MegaGames’ Jazz Jackrabbit, OMF 2097, and more. I only got to check out the LucasArts classics when Grim Fandango Remastered released 2 years ago. I had never played Full Throttle either when it released more than two decades ago and seeing the trailer at PSX last year got me excited to check it out. Full Throttle Remastered is a short but fantastic point and click adventure that totally holds its own today.

I pretty much only remembered the music from the trailer and booted it up mostly going in blind. The opening absolutely blew me away. You play as Ben, the leader of a biker gang who is narrating what happened before he woke up. The opening credits are presented really well with some of the main characters introduced by just a bit of talking. It even has its Doom moment (like that shotgun syncing with the music in the first level) when the bike hits the limo’s hood ornament. This is where the music properly kicks in and I knew I was in for a good time.

Even though there’s an overarching theme of sex, drugs, and rock & roll, this experience is actually set in the future. This theme extends to the music and the in game interface. When you try and interact with anything, there’re skulls, fists, fire, and more representing actions.

Corley Motors is the last manufacturer of motorcycles and the founder is pretty old, but still a biker at heart. His vice president, Ripburger on the other hand is a scheming evil businessman. They stop their limo to hang out with the Polecats at a bar and one thing leads to another before Ben is knocked out. Ripburger tries to hire the bikers and it obviously doesn’t work out. Ben soon meets Maureen who is awesome. She’s a mechanic who fixes up his bike. It feels weird referencing newer games when I talk about what is essentially over 20 years old here, but it just goes to show how far ahead of its time Full Throttle was or just how much other games are influenced by it. The relationship and dynamic that exists between Ben and Maureen here reminded me of that between Henry and Delilah in Firewatch. There’s a mini game or section that basically plays like an older Road Rash (remember where you have to take out bikers with weapons to get new weapons before trying to find a hidden cave?).

There’s a lot of pointing and clicking and the PC version has native support for the PS4 controller which is what I used for a bit while playing it. The mappings are a bit off as the Share button switched between visual styles as opposed to the touchpad for me. Having the option to kick, grab, or lick/talk to anything results in some interesting dialogue. Get ready to hear the lovely voice of the late Roy Conrad as Ben say “I’m not putting my lips on that” often if you try and lick random objects like I did. Puzzles obviously require you to have certain objects which are only found by opening and exploring. There are only a few time sensitive or action based puzzles here that require quick actions or inputs.

The remaster lets you switch between the original letterbox aspect ratio with old visuals and the widescreen remaster with the press of a button at any time. This is great to see how much has changed while keeping things true to the original art or vision. Animations are obviously smoother and the game is now 60fps. I did have some frame rate drops in the motorcycle mini game though. The old school style is also worth checking out just to see how much character the artists managed to get out of visual limitations while keeping the cinematic feel throughout.

I absolutely loved the voice acting in Grim Fandango and the cast here has done a magnificent job. Even the smaller characters like the bartender who has his face rammed into the bar and a merchandise seller in a stadium sound great. Roy Conrad’s performance as Ben is easily the highlight for me. The voice acting has had some tweaking for this remaster in the audio levels as well. When you switch to the old visual style, even the audio switches. There’s also an audio commentary that you can toggle when you feel like it in game, where you get some background for the scene and some of the characters. Speaking of the audio, the music here is amazing. There’s a lot of original music from Peter McConnell and music by the biker band The Gone Jackals. I feel like the lack of Judas Priest music is an absolute missed opportunity. Heck I thought Priest’s Heading out to the Highway or Turbo Lover would play when Ben is riding on an empty road. That aside, The Gone Jackals songs used throughout are great.

My only complaints are with a few of the puzzles or mini games here. There’s one that involves toy bunnies that made me want to actually fling my computer into a minefield and one where kicking a wall in real life made more sense than a puzzle in game. I expected things like this already after Grim Fandango, but they are annoying nonetheless.

Full Throttle Remastered feels like a game I should have absolutely played back when it released and I’m glad this remaster has given me a chance to play it today. I really should get around to playing Day of the Tentacle Remastered soon and hope that Double Fine can get these three released physically somehow.

Few annoying sections
Some performance issues in one section

Full Throttle Remastered is a fantastic point and click heavy metal adventure that is an essential for fans of the genre.