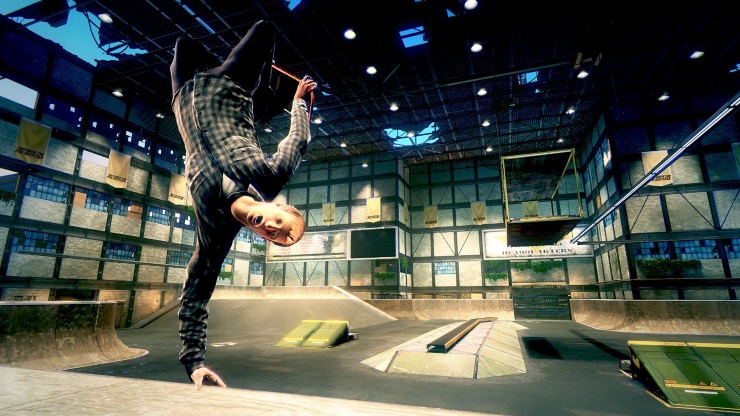 As someone who has waited far too long to be able to jump back onto a virtual 3D skateboard, I can’t help but feel incredibly underwhelmed and disappointed at Tony Hawk’s Pro Skater 5. Not only because it’s a very bad game, but because there are some interesting ideas there, and had more effort, time and money been spent on the project then it could have actually been a worthy entrant into a beloved franchise, rather than, quite frankly, a bit of a cash-in.

That Pro Skater 5 is pretty awful probably won’t come as too much of a surprise to many, especially since during the run up to its release negative impressions circled like a swarm of starving sharks. However, it’s not unplayable in the slightest, and fun can be occasionally found, albeit in a slightly masochistic way.

The main hook is in the mission structure, which is very reminiscent of recent skateboarding title, Olli Olli. Pro Skater 5 gives you access to an area, but in order to move onto to the next skate park you have to earn a certain number of stars. These can be achieved via completing objectives in “free skate” mode or by achieving the best scores in missions. Also like Olli Olli, I had to reach the highest skill level in order to earn the optimum number of stars in each mission. These missions are varied, interesting enough and even quite amusing at times – seeing Tony Hawk’s head gradually grow larger and then explode for the first time was certainly surprising. They also had enough of the “one more go” factor to keep me continuously pressing the retry button even though I was growing increasingly frustrated with how the skating felt.

And there lies the crux of Pro Skater 5’s faults: it’s just infuriating to play. If you get lucky and everything runs smoothly for about twenty seconds, pulling off tricks can feel incredibly satisfying, and even harks back to the glory days when you manage a risky trick and end up landing it perfectly. However, it just never lasts long enough to sustain the enjoyment. Severe frame rate drops, long load times, glitchy visuals and characters’ legs spontaneously collapsing as if a cattle prod has been inserted up their rectum are just a few of the near ever-present bugs that render it a chore to play.

Even the insanely bizarre crashes, which occur completely arbitrarily and usually for no apparent reason, which send the skaters so high up into orbit they may as well go and save Matt Damon themselves, aren’t fun. They feel floaty and lightweight and aren’t even slightly humorous. They’re just very, very perplexing. One aspect in particular that constantly frustrated me was extremely random clips of the camera. I’d be looking one way, and then very suddenly facing another. The transitions were so jarring that they were constantly ripping me out of the enjoyment I was already struggling for.

While each of the eight developer-made parks constantly improved and offer something a little more exciting with each unlock, they’re a slog to work through and aren’t exactly worth the effort – especially since they’re so bland and forgettable. Developer Robomodo’s late art-style switch certainly didn’t pay off, with Pro Skater 5 looking like it was drawn in MS Paint.

Controls feel loose and unresponsive; I’d attempt to transit from one grind to another and the skater on the screen just wouldn’t react in time with the buttons I was pressing. This made PS5 feel as if it had a real lack of momentum, as tricks didn’t naturally flow into each other so building up any sort of rhythm felt near-on impossible. It doesn’t help that the controls feel very archaic. Having to press three different buttons in order to move and jump, then even more if you wish to pull off any tricks, just feels unnecessarily convoluted in this modern era.

One would presume that one of the many reasons Pro Skater 5 runs so poorly is due to its always online feature, with latency issues and such. It completely bewilders me as to why the always online route was chosen, when it quite literally offers absolutely nothing to the player besides constantly disappearing skaters that wait around long enough only serve as annoying obstacles, or the intrusive yellow text that covers a quarter of the screen whenever someone joins or leaves the game. Although, saying all that, it doesn’t run much better in private matches.

Sadly, Pro Skater 5’s performance issue’s don’t end in the skate park either. I’ve had the game crash on me twice for no apparent reason and my progress just simply hasn’t been registered or saved on countless occasions. A brilliant sound track has often been a pivotal part of the great Pro Skater games of the past but, unfortunately, this iteration fails in this department too. There’s not nearly enough whiny American punk rock or chilled hip/hop that really captures the vibe of skateboarding. With only the likes of State Champs’ “Secrets” and Four Year Strong’s “Go Down in History” providing that particular sound. I couldn’t cope with how out of place the soundtrack was for long, so I highly recommend you turn down the volume and stick on the soundtrack to Pro Skater 2, or even just Ashes to Ashes, instead.

Despite it all, I did manage to occasionally enjoy myself while playing Tony Hawks’ Pro Skater 5. There are other positive aspects too: the Skater Bios offer comprehensive information about every skater in the game, which will no doubt appeal to devoted skateboarding fans. The park creation offers lots of options and obstacles (with nothing held back behind unlocks), for the creatively inclined and it has resulted in some pretty enjoyable player-created levels. However, with just so many defects spoiling my enjoyment, it’s incredibly difficult for me to recommend Tony Hawk’s Pro Skater 5 to anyone.

Fleeting moments of genuine enjoyment can be found in Tony Hawk’s Pro Skater 5, but with unresponsive controls and constant jarring bugs, the enjoyment is never sustained.