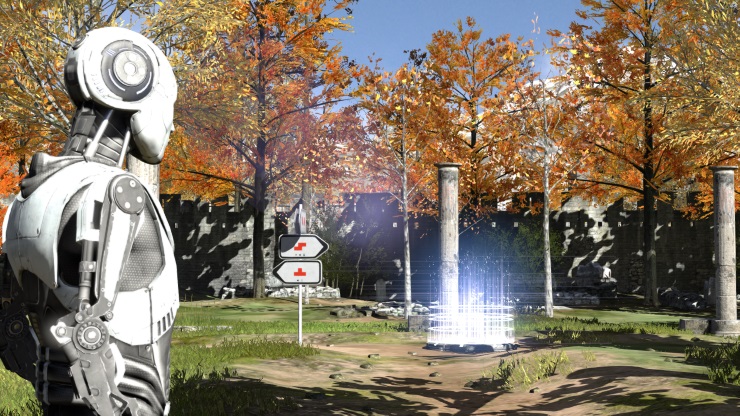 Every now and then there’s a game my Steam list gets obsessed with. While Undertale is the current obsession, The Talos Principle is all I saw on Steam a few months ago. When something like this happens, I try and go on a media blackout until I finally get to play the game in question. I finally got to experience The Talos Principle on PS4 and it has left me mentally stimulated unlike any other game.

Puzzle games usually introduce a unique mechanic and continue to build on that. The Swapper did this and succeeded. The Talos Principle eases you into new mechanics to solve puzzles and gradually makes things more difficult. Barring one or two levels where I was stuck for enough time to unlock a trophy, the difficulty curve feels just right, though it’s arguably a little too lenient early on. You work with jammers, connectors, fans, copies of yourself, and more as you progress further into the main puzzle. The aim of each level is to unlock a sigil that is used in another small puzzle to unlock a door to newer areas. Puzzles feel rewarding, and hearing that door or gate unlock when you discover the solution is quite something. The real challenge, however, is unlocking stars in some levels that are hidden in most cases behind vague objectives. The puzzles in the Road To Gehenna expansion take place on a larger scale and assume prior knowledge of everything in The Talos Principle. The disconnect between puzzles and narrative feels more severe in the expansion.

Whenever The Talos Principle is mentioned, the word “philosophy” is thrown around, and for good reason. You play as a robot and are trying to discover things about yourself and why you are doing what you do through terminals scattered across level hubs. The information in terminals ranges from nonsensical lyrics to interactive surveys, and everything adds to the overall mystery. There are also audio logs, and taking everything in is quite overwhelming. This is where I feel like Croteam had a misfire. The puzzles on their own are amazing and so is the story that is slowly revealed through terminals and logs, but they feel too independent, even though the multiple endings try to tie them all together. You could avoid all the terminals and just play this as a puzzle game and still come out smiling, but that’s not what Croteam wants.

Elohim, an omnipresent and holy voice, guides you, slowly revealing what you are doing and how you can achieve ever-lasting life. When you reach the hub that lets you access other worlds, Elohim makes sure you are aware of things and the dialogue here was reassuring in an otherwise massive hub with multiple exits.

Visuals in The Talos Principle range from drop dead gorgeous to repetitive. As I neared the end of a world, I got fairly tired of seeing the same environments with different puzzles. There are areas resembling Egypt and it felt like I was playing a videogame version of Crystal Maze at one point. Audio design here is top notch. The music does a great job of complementing the visuals to create a believable atmosphere, which coupled with great voice acting, leaves almost nothing to criticise. Speaking of things to criticise, the technical performance in some levels and hubs is disappointing. This happens more often in the Gehenna expansion that’s included in the PS4 release. Small frame drops don’t matter much to me but everything suddenly becomes like Borderlands 2 on Vita during some levels and it completely breaks immersion. I hope Croteam is working on this for a future patch.

If I had to compare Talos to other games, I would say it blends Portal with Everybody’s Gone to the Rapture and adds a dash of The Stanley Parable. The Talos Principle is chock full of content and the Road To Gehenna content is even harder than base game. If you’re a fan of puzzle games and enjoy getting mentally tested, The Talos Principle is for you.

The Talos Principle surprised me in almost every way, and it's one of the best puzzle games in recent years.